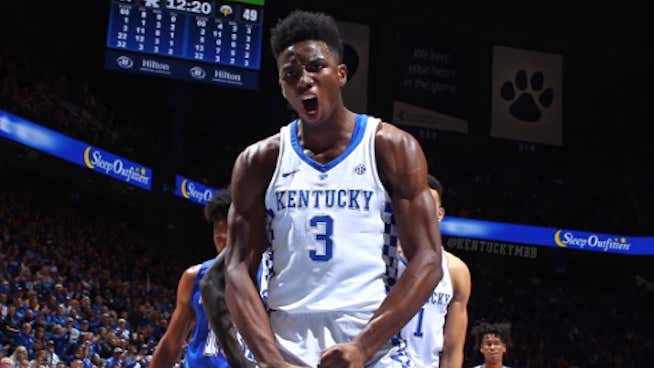 So it’s another slow week in terms of slate of games this week. Schools are still finishing up exams and while it’s a little better than last week, it’s not great. That means we have another week of writing different kinds of blogs that aren’t game previews or recaps. I talked about Trae Young ,who is the early favorite for National Player of the Year. Also talked about Michigan State’s defense and the blueprint for mid major success.  In the past I broke down Villanova’s offense among some other things. We’ll be doing different scouting reports throughout the week – so if there’s one in particular, or any other idea – send them to me on Twitter @barstoolreags

Today we’ll talk about one of the more intriguing teams in the country – Kentucky. Now, I’ll get it out of the way because I’m sure it will be mentioned plenty. Yes, I did go to Kentucky. No, this isn’t a homer piece – it’s still Kentucky basketball, which is sort of important in college hoops. Yes, I still am out on this team as a national title contender as of December 20, 2017. Okay, now that that’s over with, let’s take a look at what they’ve been doing lately.

I say Kentucky is one of the most intriguing teams in the country due to the fact this isn’t your typical John Calipari team. Yes, they are young, but they are the youngest team he’s ever coached. He typically has that sophomore or junior that has played serious minutes returning to be that leader. This year that sophomore is Wenyen Gabriel who had an up and down freshman year and while he started most games, wasn’t exactly a focal point. In year’s past he had guys like Isaiah Briscoe, Tyler Ulis, Alex Poythress, Doron Lamb and Darius Miller to be that veteran.

On top of that there were legitimate questions about this team’s offensive capability. You expected them to be decent defensively due to the length and ability to switch, not to mention the fact that Calipari is a defensive-coach first. Offensively though questions loomed large – especially after the start of the season. Who would be the go-to scorer? Would anyone be consistent enough to be a threat offensively? Who would be able to stretch the floor with Vanderbilt and Baker out?

Kentucky currently ranks 23rd in AdjO, which is the second lowest of the Calipari-era ahead of just the 2012-13 NIT team. Now, that said, this team is now the highest-ranking Calipari team in terms of assist rate while shooting the second best (behind the 2009-10 team) from inside the 3-point line. The 3-point shooting? It’s actually up right now to 37.1%, higher than last year’s team with Malik Monk and two year’s ago with Jamal Murray. The one major difference though? They are shooting the least amount of threes than they ever have. But, what we’ve seen is after not scoring 80 points in its first five games, Kentucky reaching that number in 4 of its last 5, including three games over 90. Now, take the caveat of it coming against weaker opponents and a Virginia Tech team that isn’t known for great defense.

There are a few important pieces for Kentucky’s offense going forward. First, this team needs to continue to get out of and run in transition. They are at their best while in transition as they are scoring 1.119 points per possession in transition compared to .959 in the halfcourt. They rank 37th in the country with 20.5 points per game in transition. More importantly it’s letting them take advantage of their biggest mismatch. Athleticism. What makes them so strong in transition is the fact they get the ball to whoever and go. There are typically four guys on the court who can handle the ball and push the floor – Green/Diallo/Knox/Washington of the starting five. What they typically do is outlet right away to whoever, Green will more often not cut to the middle of the floor looking for another outlet if it’s there and then go in a 2v1. In a play like this though where Kentucky is turning defense to offense you can see the quick passing and lane filling.

Now what’s been more important here is the shooting from Quade Green and Hami Diallo in the half court. Green is currently shooting 44% from the 3-point line and Diallo is at 38.5%. Both of those numbers are likely to go down but if Diallo hovers around 36% while Green is at 40%, it ultimately changes how they look offensively. What Kentucky likes to run in the halfcourt is two bigs on each block with a wing running off a circle cut. From there it gives a few options. One is to take a dribble and attack the rim himself. Second is to throw a lob to one of the bigs, wherever the help is coming. Another is to just catch and shoot a 10-footer. Finally the last is to kick to the wing or top of the key for three. If Knox is the one running the circle cut with two shooters you have to respect going forward it opens up the lane even more for him and Nick Richards. Kentucky’s best offense this year per Synergy is coming on post ups and cuts – not counting transition play. Another set to keep an eye on that Kentucky has been running more of lately starts in the horns set. From there they’ll run Knox or Washington off a couple of screens as he dives to the low block to post. This is especially used for Knox and something we saw a lot against Virginia Tech. Knox typically has an advantage as a 6’9″ wing player to where he can post.

Ultimately there are still problems with this team though. They are turnover prone with turnovers on 20% of possessions and a way below average free throw shooting team. They can get sloppy with the ball as they try to still just attack the dribble-drive offense and either walk or throw a careless pass, but what this offense is starting to do is get more fluid in the halfcourt. We’re seeing guys like Wenyen Gabriel shoot 35% from the 3-point line – an important number to watch. Cal has said he wants Gabriel to be similar to Derek Willis and in order to do that he has to shoot a minimum of 35% from the 3-point line.

They’ll have two games coming up that will be good gauges for the offense. They play UCLA this weekend in the CBS Classic, which isn’t a good defensive team. The reason I say that game is worth gauging is because if Kentucky can go score 85 again against UCLA, they are on the right path. More importantly the week after that they play Louisville who will run, jump and make you think about turnovers. That’s an important game for the backcourt of Gilgeous-Alexander and Green in order to see where they are in handling pressure.

Ultimately though this offense is going to come down to Hami Diallo. If he’s a threat to shoot the ball, the lane opens up. Teams can’t just sag off of him daring him to shoot and clogging the lane for Knox/Washington/Richards. We saw against Virginia Tech the plus side of his streaky shooting and something that can happen going forward. So while this isn’t a great offensive team, they are starting to figure it out. As I mentioned earlier, as of December 20, 2017, this isn’t a team I’d consider a national title contender, but one that is worth watching the improvement come SEC play.