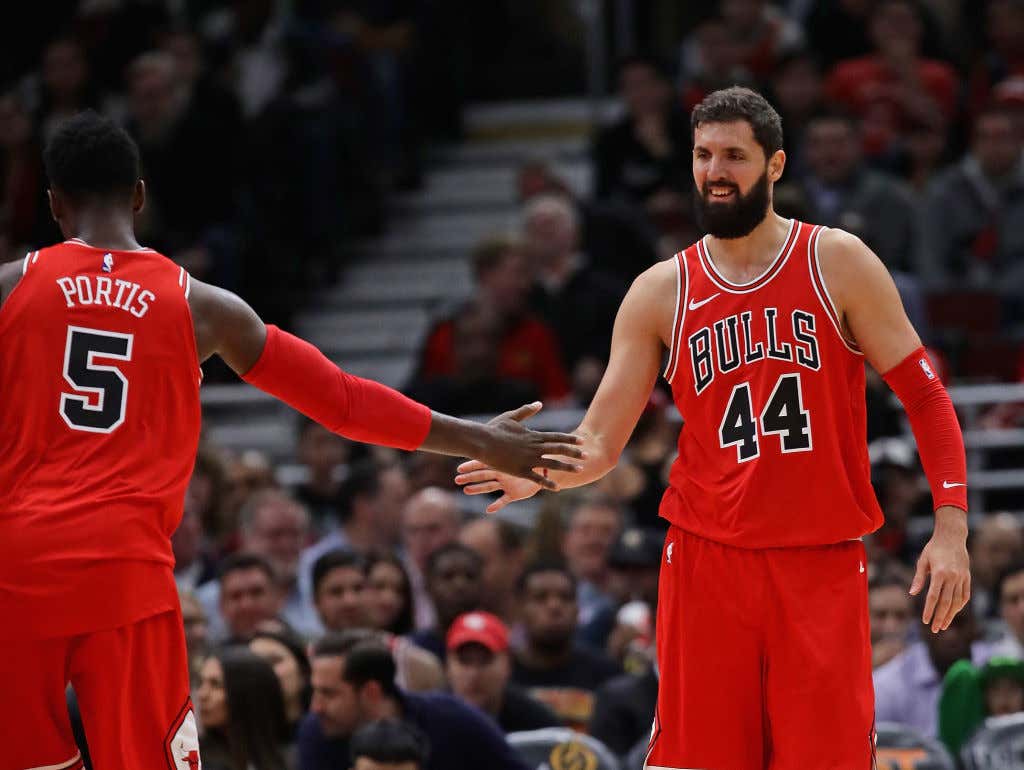 Welcome back to another edition of Last Night In The NBA and boyyyy do we have a lot to cover. There were 10 games last night, and by the end of it I would say this was one of the more entertaining nights of the NBA year so far. Late game drama like you read about. if you missed it watching MNF or something, I’m sorry, but I’m alos here to tell you how it went, so here’s what happened

No surprise here really, no Porzingis and THJ, I’m not shocked the Knicks barely scored over 90 points. You would then think that this would be a game in  which guys like Kemba/Dwight/Batum went off, but for the most part they all struggled. Instead, it was Frank The Tank that the Knicks had no answer for

He finished with 24/5 on 10-13 to lead all scorers, and he didn’t miss a shot until the fourth quarter. This is probably a welcomed sign for CHA fans as Frank had struggled a little bit since his ankle injury, but you saw how valuable his spacing can be.

Guys like MKG aklso had 15/10, but the story here was Frank.

For NYK, again they’re missing their two best players so you kind of throw this out the window, but at least Michael Beasley looked good!

He led the Knicks with 23/9 on 9-20 shooting. Speaking of Beasley, anyone else get absolutely bullshit when in 2k18 MyGM the new owner’s son just straight up makes a trade for you? Well my guys were OBSESSED with Michael Beasley and traded for him behind my back. Very unfair! I don’t know why 2K thought this was a cool storyline idea, because it made me want to throw my Ps4 out the goddamn window.

Not a great loss for a MIA team hoping to slide into a top 8 spot, and not a smart idea for ATL who is clearly tanking to win games. Both of you need to be better. But when Torean Prince is going to go for 24/7 on 7-12 shooting which was a career high

and you add in 23/6/6 from Schroder, you’re going to back your way into some wins. Now, was this mostly possible because MIA had just 9 healthy guys? Probably, but credit them for dropping three straight quarters of at least 29 points, and holding off one final MIA run in the fourth to pull it out. Hooray for being 4-10 at home!

For MIA, like I said, they were missing practically their whole team. Dragic, James Johnson, Winslow and Whiteside all didn’t play. Those are some key pieces right there. Josh Richardson did play, and he had 26 on 10-19 to lead all scorers

and they also got a solid night from Dion Waiters as well, who had 23

The problem, like it so often is when you lose to a terrible team, was TOs. MIA ended the night with 19 TOs that led to 17 ATL points. Not great.

The full blog is coming, but how can I best sum up this league leading 26th win? Kinda like this

Chicago what are you doing!!! What were you thinking becoming the hottest team in the East?!?! You were doing so well with your tank and you’ve just gone and ruined it all, for what??? All the sudden Mirotic comes back and the Bulls forget how to lose it’s wild. In this game they not only scored the second highest total of their season, they did it with balance. Three guys with over 20 points, they finished with 47/46% splits

The Bulls looked like things were going to workout perfectly for them halfway through the fourth, but then this happened

Seven guys in double figures, 6 in a row is no joke, and suddenly the Bulls are playing some of the most exciting basketball in the East? What a weird season.

For PHI, look facts are facts. We are almost at Christmas and PHI is under .500 and currently a 10th seed. Now they didn’t have Embiid, which is a huge issue for them, I think they’re like 1-5 in games he doesn’t play, and even though they hadn’t played since Friday this wasn’t a surprise because they play again tonight against SAC. Even without Embiid though, this team should be able to win a game like this with the talent they DID have. I mean Simmons was his usual ridiculous self with 19/11/9 on 9-18 shooting

and Saric more than carried his weight with 27

they even got strong bench play with 53 points coming from the second unit. We all love how entertaining Embiid is and shit, but at some point the Sixers have to start winning right? They haven’t had to deal with any major injuries or anything like that, and if you’re a Sixers fan trying to deflect the fact that this team has underachieved, you’re lying to yourself. You love to scream about how you have 2 Top 20 players, well then you shouldn’t be 1.5 games out of the 8 seed in the East.

This team is too good to miss the playoffs, and while I don’t think they will, I think I’m with everyone that as soon as we saw how legit Embiid/Simmons are, the team’s expectations rose.

14 in a row now for HOU, CP3 is undefeated so far this season, and the Rockets are showing no signs of slowing down any time soon. It’s almost a pick your poison sitution with the Rockets, because in this game you want to focus on Harden, he has 26, then while you’re doing that you realize that Capela has feasted on you for 24/20 on 10-12, all while CP3 does his thing with 18/10. That’s just the starters you have to worry about. Then Eric Gordon comes in and he has the best night of anyone with 33 points on 12-18n shooting including 7 threes.

This was all while Ryan Anderson didn’t score a point. That’s terrifying

For UTA, I give them credit for playing BOS/CLE tough, but returning to the West was not kind to them. It had to be a little frustrating that you can shoot 46% and turn it over just 6 times and get blown out, but that’s what the Rockets are doing to people so don’t take it personally. Instead, focus on the Rodney Hood 26 on 10-18 shooting off the bench. That was much nicer

Another one that came right down to the wire between two teams that always seem to be playing in games that come down to the last possession. Fortunately for MIN, they had guys like Jimmy Butler and Jamal Crawford who combined for 60 of the 108, including a game winning iso possession from Butler

They needed an epic fourth quarter to pull it off, after being down 10 with around 7 minutes left, and that’s exactly what those two guys gave them. On a night where MIN’s young guys struggled, with Wiggins and KAT going a combined 9-29, they had to rely on the old vets, which I’m sure is exactly how Thibs prefers it because he’s weird like that. At least this time he sort of played his bench, I mean not in the sense that more than one guy played more than 20 minutes, but close!

For POR, tough loss no doubt, and something that has been happening to them a lot this season. They shot 54% from the field, but also had 17 TOs. Dame and CJ were their normal selves, they even got 20/7 from Nurkic, but when they needed one last stop, they couldn’t get it

I told you, last night was filled with closer ass games. This one though, boy was OKC lucky because it almost feels wrong to consider this an OKC win, when Westbrook was the only player who showed up. Sure he took 28 shots with the next closest player taking 13, but OKC only had 2 players in double figures, and Melo/PG13 combined to go just 5-18 so what choice did Westbrook have?

As it stands todya OKC is in the playoffs, and is just 2.5 back of the 4 spot. Basically even though they look awful in crunch time, and have had some bad losses, at the end of the day they’re still right there and are not a contender for blowing it all up come February, which is a good thing. Imagine a OKC/HOU series though? That would be wild.

For DEN, they tried to come back with a great third quarter, but they started slow, and they scored just 18 points in the fourth to ultimately fall just short. Tough when guys like Will Barton go 2-15 and Gary Harris goes 7-17, but the good news is Jokic looked good and he played 25 minutes so it’s only a matter of time before he’s back to his starting role. The Nuggets are still a 6 seed at the moment, they just need to get better on the road, where they’re 5-12.

Somebody had to win this toilet bowl game, so I guess congrats to PHX! For them it was all about the second unit and guys like Alex Len who had 14/14 and Canaan who had 17/6

It’s really not as fun to watch this team when they don’t have Booker, so he needs to come back pronto

For DAL, another strong night from Harrison Barnes who had 26, but 26/29% splits with 15 TOs probably isn’t the best strategy. DAL has played teams tough recently, but it appears as though they are starting to flame out again. That’s OK, they’re tanking so it’s whatever.

I don’t have the numbers in front of me, but it always feels like SA beats the Clippers and last night was no different. They did it with Kawhi playing just 16 minutes too, instead relying on LMA to carry the load and he responded with 19/8. It was their 10th straight home win, and they’re starting to look like the Spurs again, especially with Tony Parker looking like Tony Parker

For LAC, they didn’t have Lou Williams who was out with a sore right foot, and as a result, they didn’t really have anyone to score the ball. No Clipper finished with more than 13 points, nobody really shot the ball well, but here’s some highlights of the passing God because what else would we show?

Will this team just blow it up already what are they waiting for.

And finally, the Lakers game. A night where they celebrated Kobe Bryant by retiring both his jerseys

we were also treated to a pretty entertaining game. Another game without Curry/Green, once again it was Durant who carried the load with 36/11/8 on 10-29. Guy has been on an absolute tear

But everybody knows GS is better than LAL even without those guys. Lakers fans should care as much about the score as much as they should care about what we saw from the Lakers young talent.

For LAL, you’re probably a little disappointed you didn’t pull out the OT win, but look at the performances you got from your young building blocks, including Lonzo!

So fine, the Lakers can have their circle jerk night over Kobe and can get some promising outings, but I don’t care about any of that. I care about the record, and I need all the losses. Give me more losses.

Also it looked like Lopez got hurt which sucks, but isn’t exactly a surprise. That pick just got a little more attractive.

And that’s it! You’re now all caught up on everything that happened last night in the NBA. We have just 3 games tonight so you should catch them all, but if not, I’ll tell you all about it tomorrow.