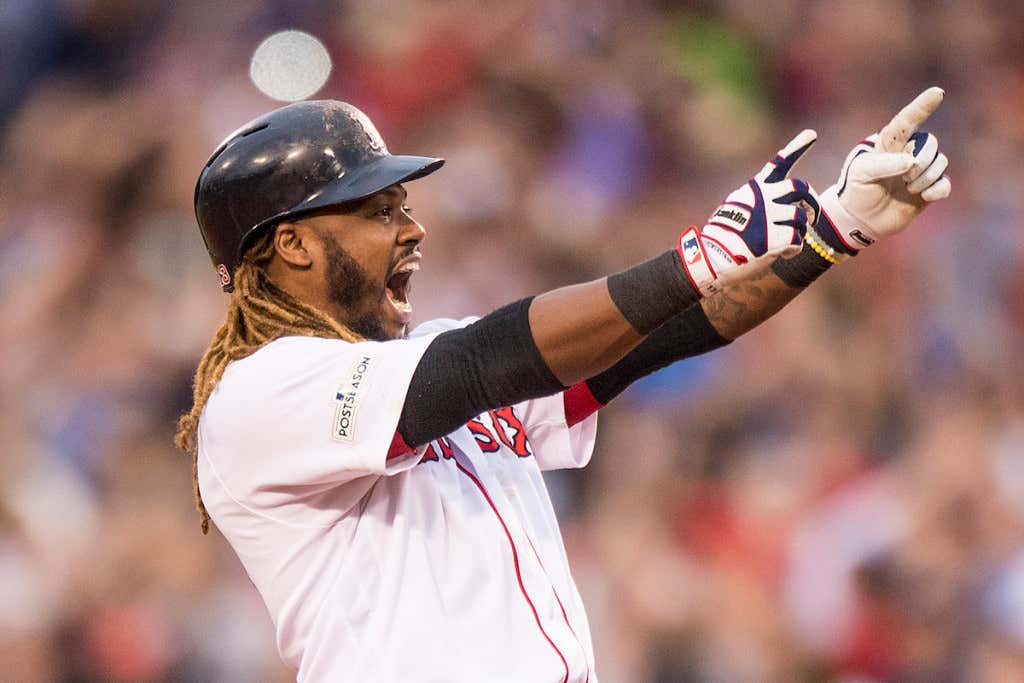 The Red Sox might have a bit of a problem on their hands, or a blessing in disguise if you’re a glass half full kind of guy. We’ll explain what that means in a second, but first, let’s set the stage here.

The Red Sox went into the offseason knowing that they needed to add a middle of the order bat. Giancarlo Stanton should’ve been the obvious first choice, but Dave Dombrowski felt otherwise. It’s clear now that the Red Sox had their sights set on JD Martinez all along, so here we are, a little over seven weeks into the offseason, and the Red Sox are in a standoff with super agent Scott Boras over what Martinez’s contract might look like in terms of length and dollars.

What does that have to do with Hanley Ramirez, you might be asking? Well, on Monday night, the Red Sox re-signed their first baseman from a year ago, Mitch Moreland, to a team-friendly, two-year deal worth $13 million. That’s peanuts to an organization like Boston. Martinez, who has spent just about his entire major league career as an outfielder (DH’d in 38 games), figures to get a majority of his at-bats with the Red Sox as a designated hitter with Andrew Benintendi, Jackie Bradley Jr. and Mookie Betts all being better defensive players in the outfield.

If the outfield is set, first base is now also set, and Martinez could enter the fold as Boston’s DH, then where does that leave Hanley Ramirez? It’s somewhat complicated. The Red Sox could look to trade the soon to be 34-year-old, but it appears as though they’ve already explored that avenue with underwhelming success.

Ramirez is guaranteed $22 million in 2018, and has a vesting option for 2019 worth another $22 million if he accumulates 1,050 plate appearances between 2017 and 2018, which means that he’d only need 497 plate appearances next year for that 2019 option to kick in. Hanley has averaged 586 plate appearances over his last two seasons, so if given the full-time opportunity, the chances are fairly decent that he’d reach that mark, making the remainder of his contract two years and $44 million.

Beyond just the money owed to Ramirez next year and possibly the year after, the biggest reason why the Red Sox aren’t getting any bites on the former batting champ is because there are still a ton of free agent first basemen/DH types out there. You’ve got Matt Adams, Yonder Alonso, Chris Carter, Lucas Duda, the recently released Adrian Gonzalez, Eric Hosmer, Logan Morrison, Mike Napoli, Mark Reynolds, Jose Bautista, and Matt Holliday just to name a few. There are even more than that.

So, if trading Ramirez isn’t an option, which it seems like that’s the case, even though the Red Sox are willing to eat some money on his deal, then might they consider just straight up releasing him? I think that’s an extreme reaction, to be quite honest. Even if Hanley is putting up the numbers that he did last year — .242 with a .750 OPS — he’s still a presence in that lineup, if that counts for anything. I don’t know if anyone wants to pay $22 million for “presence”, though, but it’s better than paying $22 million for nothing at all.

And if the Red Sox were to release him, then that would bring the total up to $52,979,429 in dead money between Hanley, Pablo Sandoval and Rusney Castillo, who’s rotting away in Pawtucket and not even on the 40-man roster, just in 2018 alone. They’re still paying Sandoval $18,455,000 in 2019, plus another $5 million for his buyout in 2020, then another $11.8 million for Castillo in 2019, and $14.3 million in 2020. If they were to release Hanley, that’s a grand total of $102,534,429 for literally nothing. Think about that. If the Red Sox release Hanley, they will have committed over a hundred million dollars to three players over the next three years for literally doing absolutely nothing. What a world.

But what I think should happen, is that the Red Sox should see how a platoon at first base works out. Hanley greatly underachieved in 2017, but he’s only a year removed from a 2016 season in which he hit 30 homers and drove in 111 runs. And in that 2016 season, he hit .346 with a 1.097 OPS against left-handed pitching in 143 plate appearances. Call me crazy, but I think it’s worth giving Hanley a shot against left-handed pitching at first base if the alternative is paying him $22 million to take a vacation on John Henry’s dime.

And again, all of this is under the assumption that the Red Sox sign JD Martinez. If they whiff on that, then the whole conversation is null and void, but it’s worth taking a look at now with Boston being a clear frontrunner to sign the veteran slugger.