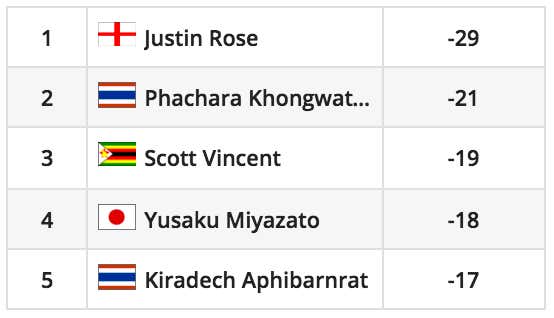 Oh ho hum Justin Rose casually lapping the field in Indonesia over the weekend, winning by NINE shots after a final round 10-under 62. The 2013 US Open champ, 2017 Masters runner-up, and 2016 Olympic gold medalist is now the hottest player on the planet. Three wins in his last 10 starts, six top-5s, hasn’t finished outside the top-10, and doing it ALL real sneaky like.

Look at this run.

This too is a very nice touch.

Love to mock the #goodforgolf crowd but we talk Dustin Johnson, Justin Thomas, Jordan Spieth, Rickie Fowler, Rory McIlroy, Hideki Matsuyama, the return of Tiger, Brooks Keopka, Jason Day, before even mentioning the current hottest player on the planet Justin Rose (a major champ and gold medalist). Just another guy who’s capable of heating up and going on a serious run. A lot of talent out there. I am en excited person for 2018.

I’ve always liked Justin Rose but took it up a notch after hearing a little story at Merion this fall. Rose of course won the 2013 Open there, closing with several CLUTCH shots on the East Course’s iconically difficult 18th. It’s customary and quite common for the host course to offer the US Open champ an honorary (and free) membership. Before this offer was made, Rose alerted the club that he’d like membership, and he’d like to know the full price and to whom he should make out his check.

He’s been a member since. When he shows up, he and his family are very well-liked at the club. As nice and engaging as you’ll find.

He’s a solid follow on the IG. Rosie’s got that rare action that’s damn near perfect, yet looks so simple and easy. Feels like you could grab a club and a mirror and look exactly like that, but never actually hit it like that. Never. Ever.

PS — How did this not break?