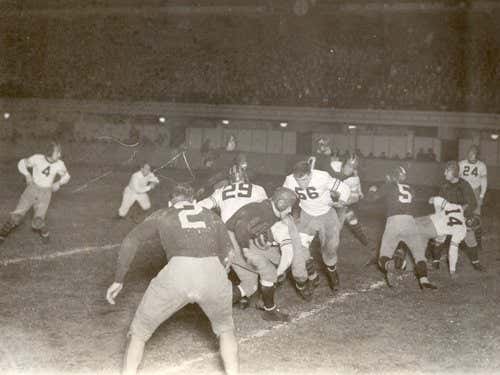 The NFL plays if first playoff game as the Chicago Bears host the Portsmouth Spartans in a tiebreaker game. The two teams finished in a statistical tie, with the Bears posting a 6-1-6 record in 13 games and the Spartans posting a 6-1-4 record in 11 games. A snowstorm forces the game indoors at Chicago Stadium, where the Bears would win the game 9-0 on a shortened field before 11, 198 fans.

The early days of the NFL where far different than the regimented league of the modern era as teams made their own schedules and the winner at the end of the season was based on who had the best win percentage as teams played an uneven amount of games. The 1932 season had two teams each post 6-1 win-loss records as ties did not count in the standings. Hoping to avoid a repeat of the 1925 controversial finish the league decided the two teams the Portsmouth Spartans coached by Potsy Clark and Chicago Bears led by Ralph Jones would play a tiebreaker playoff that would count in the standings, with the winner getting the championship. The two teams had played twice in the regular season, with each game ending in a tie. As the November 13th game at Soldier Field ended 13-13, while two weeks later in Ohio the final was 7-7.

The week leading up to the game saw Chicago struck by a severe blizzard. With extreme cold weather and frigid wind chill numbers, the game was moved from Wrigley Field to Chicago Stadium. The Bears had previously played a game indoors at the venue for charity against the Chicago Cardinals just after it opened in 1930. Due to size limitations, the field dimensions were drastically changed as the field only covered 60 yards endzone to end zone, while the field was just 45 yards wide. The sidelines butted against the stands, and to make up for the differences the ball was moved back 20 yards every time a team got within ten yards of the goal line. In addition, field goals and drop kicks were banned. 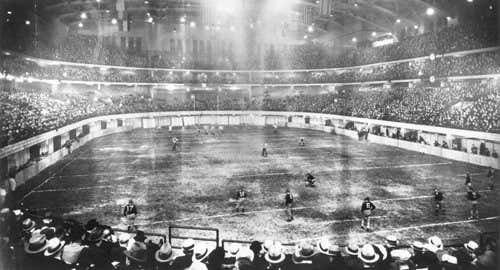 The field which was made of tanbark, provided terrible footing as the two teams could not get any offense going for the first three quarters. Finally, in the fourth quarter, the Bears found the end zone, as Bronko Nagurski on a handoff from Carl Brumbaugh pulled up short and tossed a pass to Red Grange. The play was controversial as rules at the time stated any forward pass must be five yards behind the line of scrimmage. The Bears later added two more points when the Spartans fumbled the ball out the back of their own end zone. The final score was 9-0 in favor of the Bears, 0as the game proved to be a tremendous success.

Buoyed by the success of the playoff game, the NFL decided to break the league into two division so that that they could have an annual championship game. This also led to the league adopting standardized scheduling as the league moved past its ragtag sandlot founding and began a new modern era of professional football. This would be the death nail for most small-town teams that helped shape the leagues early years, as the league moved to bigger cities, with the Green Bay Packers becoming the last of the small town teams after the Portsmouth Spartans moved and became the Detroit Lions in 1934.