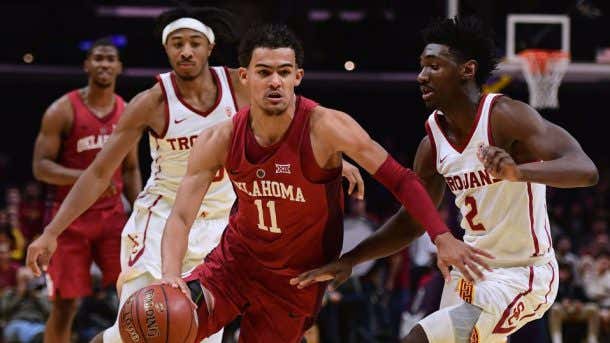 It’s time to officially say it. Trae Young has been the best player in college basketball so far this season. After Oklahoma’s win at Wichita State yesterday it’s almost a necessity to rank him No.  1 in National Player of the Year rankings and think about Oklahoma as a second weekend team. He’s been the first must-watch player since Jimmer and has drawn comparisons to the likes of Steph Curry due to his size and ability to score off the dribble. On top of that you notice how he sees a play ahead of everyone else with his passing. So with that said we’re going to go to the film, breaking down his game and what I’ve seen from him so far this year. Let’s start with the basics:

Obviously those numbers jump out at you right away, especially the points and assists per game. He’s an excellent shooter by every metric and that really shows with his free throw percentage – a number that a lot of scouts look to now to truly see the quality of shooter they are dealing with. Breaking it down even more he’s 3rd in the country in assist rate and 3rd in the country in percentage of possession used. So far this season his numbers are compared to Kyrie Irving, D’Angelo Russell and John Wall. Not bad company. Perhaps what’s most impressive about his start is the fact that he has an extremely high usage rate at 35.6% and a turnover rate of just 15%.

Oklahoma has used him quite a bit in pick and roll sets, with about 41% of possessions coming in that set. He ranks as very good there per Synergy with .928 points per possession and scoring on nearly 40% of those possessions, ranking him in the 72nd percentile in the country. What makes Young so good at scoring out of this set is his ability to both shoot off the bounce and then create space to get into the lane and use a variety of finishes. He’s not going to blow you away with athleticism or finish at the rim by jumping over anyone. What he does is use hesitation or cross dribbles to get into the lane and then use floaters and runners to get it over bigger defenders. Young is a legit 6’2″, but he’s incredibly thin which makes him look smaller than what he is.

In watching Young in the PnR set, the first thing I notice about his move is he likes to drag off the screen. He likes to shoot off the dribble, so the first thing he does is take a side dribble. Notice here against Wichita State yesterday – the best defensive team he’s seen so far this year. As they hedge on the high ball screen he goes lateral and then uses that little hesitation move he loves. Instead of a hesitation dribble here though he uses a hesitation to freeze the defense as the big goes back to the lane thinking the guard is there after the hedge. From there he has a quick release and the defense is caught dead at that moment.

In watching his shot form, it’s solid. He always gets his feet set and – where he draws comparison to Steph – his ability to have a quick release while not always balanced makes him so tough. One knock with his shot though is a low release point. You can see his form here: 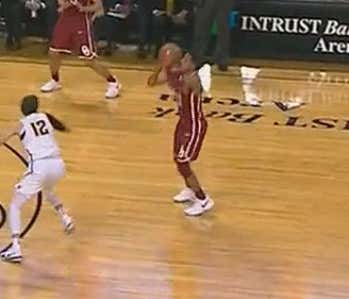 He has good balance here. His elbow is in the right place and his off hand on the ball has proper placement. From there he has a pretty straight up and down jump. One thing to watch with his shot besides his release point is how his feet are set. He can get pigeon toed at time and when he lands ends up a little sideways. His follow through is there and he has a ton of range. He can get ballsy with his shot selection, but the way he’s playing right now it’s sort of tough to knock him for that.

Where he’s at his best though is in ISO sets where he’s scoring 1.308 points per possession and Oklahoma is scoring 1.324 points per possession when he’s either shooting or passing out of this set. He ranks in the 93rd percentile nationally out of ISO sets, something he runs 11% of the time according to Synergy. He has the shiftiness here with the ball as he’s quick both laterally and going straight to the bucket. He shows off his handle, something that is for sure a strength of his right now as he really goes to using a hesitation dribble quite a bit. With his ability to stop and shoot, defenders are often stuck leaning with the hesitation move.

It’s absolutely insane just how good of a season Young is having. The question about him coming into the year is if he’d be able to score or be effective against guards with size and length. That got put to rest pretty quickly with what he’s done against USC and Wichita State. More importantly he’s doing this and playing major minutes. He’s not getting in foul trouble and has played at least 30 minutes in all but the first two games of the season. He’s turned Oklahoma into a legit contender in the Big 12 and like I said earlier a team that should be looked at as a second weekend type team.

I can’t say it enough. If you haven’t yet, tune in to an Oklahoma game and watch Young play. He’s at the point right now where it’s still really just college basketball fans who know him, but the casual fan will know him come the NCAA Tournament. He wasn’t looked at as a one and done type player and an afterthought in the freshman class with guys like Bagley, Ayton, Bamba, Sexton and more.