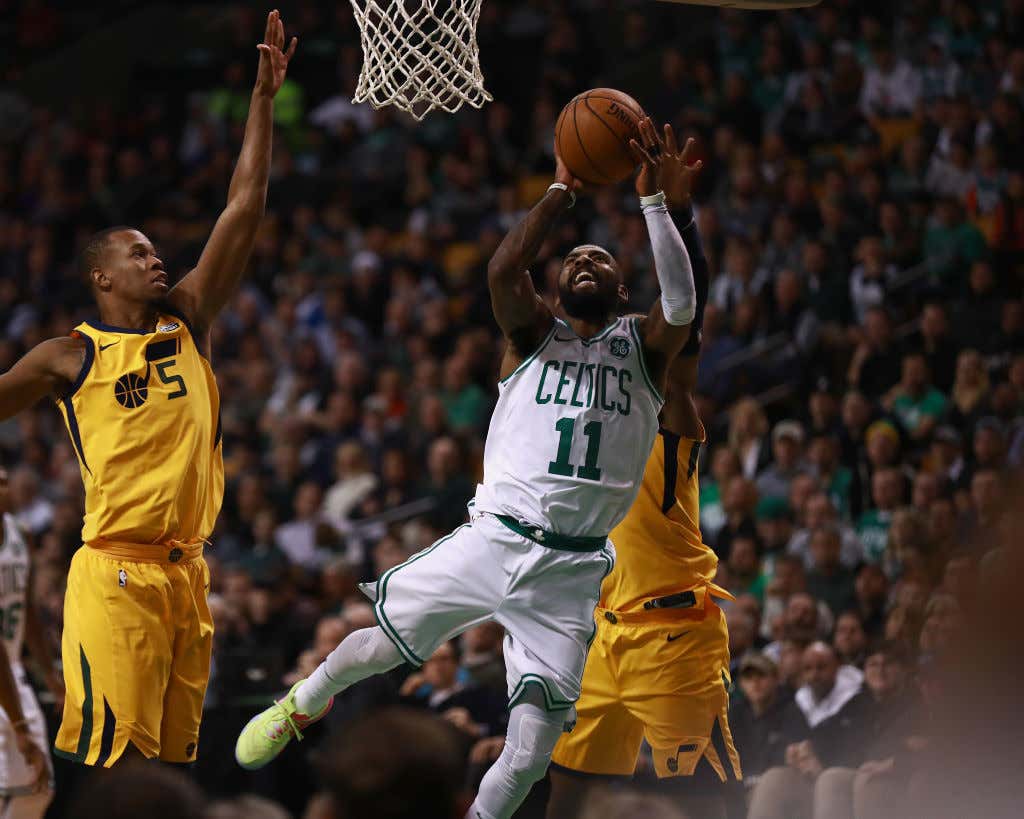 You watch the Celtics this month, you may not recognize them. Everything that got them to the top of the East in the first two months of the season, has slowly been unravelling so far in December. I shouldn’t have to say it but I will because I know people will want to remind me, it’s December 16th. The Celtics have played just 36% of their season so by no means are we even close to a disaster level situation, but I think it’s fair to call them out when they are playing like complete dickheads.

It took the Celtics 19 games to lose their 3rd game of the season, and then December came and the Celtics have already lost 3 games. They are 2-3 in their last five, with losses to fucking CHI and UTA. Why is this so frustrating? Well at the time CHI couldn’t win a game, and UTA was 2-10 on the road before last night. The Celts, a team that was 13-2 at the time at home should not have a problem beating the Jazz, especially once their two bigs left the game early.

– After sitting against DEN, Horford made his return to the lineup and instantly picked up right where he left off. He finished with 21/6/7 on 9-14 shooting and 3-5 from deep.

I was happy to see that Horford was super aggressive right at the start of this game, making his first four shots. It’s no surprise that a quarter in which the Celtics made a conscious effort to get Horford involved early and often not only ended up being the only quarter the Celtics won, but also when they looked most like the Celtics. Al was making shots, moving the ball (led the team with 4 assists) and was active on defense. Something tells me that isn’t an accident. This team is at it’s best when Horford is involved on a consistent basis, and we saw what happens when he isn’t almost immediately.

– Really the only other positive from this game was Kyrie Irving offensively. He didn’t shoot well (11-25) but his 33/6 was still impressive

That’s it though, I’m not going to try and reach for any other positives, so let’s get to the real reason why we’re all here.

– I say it all the time, and I will continue to hammer this point home until I’m blue in the face. The key to this team’s success, and why they are where they are has almost nothing to do with the offense. I know it stunk last night (we’ll get to that) and a lot of people will want to focus on that as a main reason why the Celtics lost this game. I’m going in another direction.

To me, it’s that simple. When this team defends and rebounds at a high level, THAT is when they are truly tough to beat. Well safe to say last night the defense was pretty fucking gross 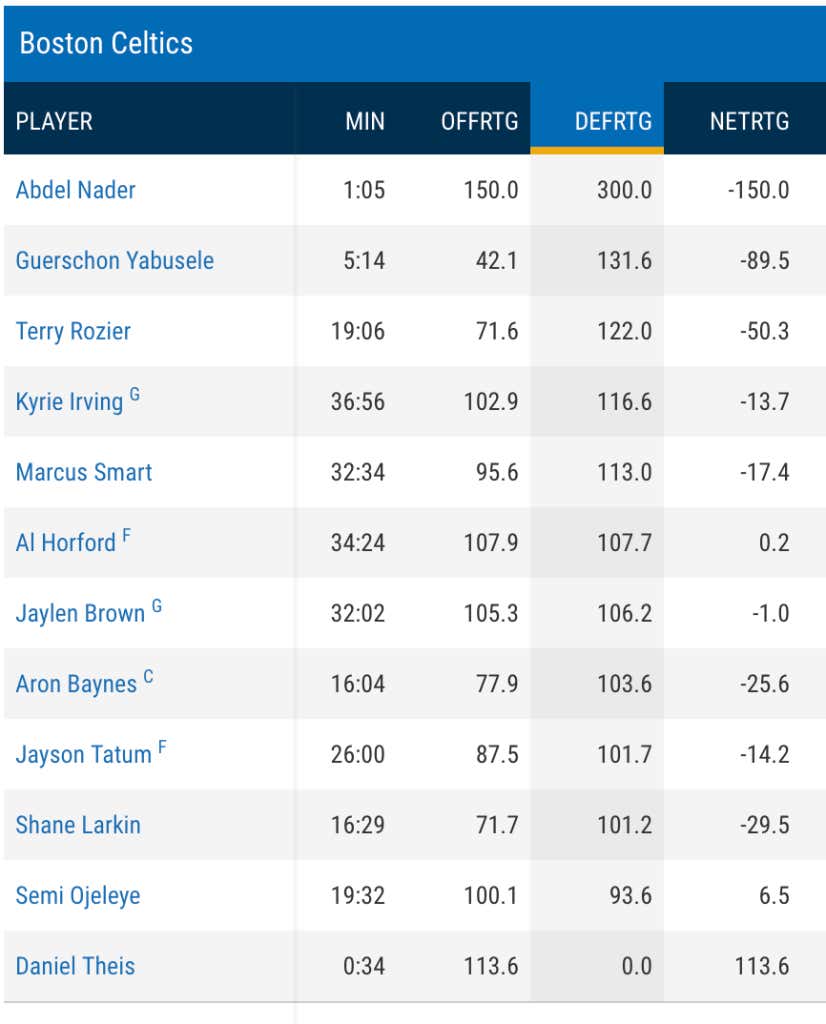 and the Celtics lost the rebounding battle 55-31, while the Jazz did not even have their best two rebounders on the floor for about 95% of the game. That is inexcusable. It’s more than just last night too, look how the Celtics have been trending since the season started

Cool the offense is improving right? Well in my opinion it’s coming at the expense of everything else. All of us, myself included could not stop raving about how this defense looked early. While we all knew that October rating was not sustainable, I think it’s fair to expect them to not be as poor as they’ve been in December. So why the drop?

For starters, their perimeter defense is starting to regress. So far in December, Kyrie has the worst defensive rating of any starter at 109.7, which is a considerable dip from his 100.4 rating in the first two months. The exact same thing can be said for other guards like Jaylen and Marcus. Both were under 100 for their first two months, and are currently at 107 and 106 so far in December. Last night was a prime example of why their perimeter defense is so important to everything they do on the defensive end. Ricky Rubio shot fucking 10-15, and started 10-11. This is what everyone was so mad about last year right? Who cares if you’re scoring on one end if you’re giving up all the points back on the other end. When the Celtics tried to make one last push, it was Donovan Mitchell who they couldn’t stop in the fourth quarter. This is RIGHT after giving up 50000 points to Garry Harris and Jamal Murray from DEN.

– Brad talked about not having energy, and he’s right. The Celtics, who were not playing a B2B like they did against CHI when they had low energy, did not play with the same intensity we all expect them to. Kyrie was lazy getting through screens so guess what UTA did, they ran 100000 screens with him and Rubio, which played a huge factor.

In 32 minutes, Jaylen contested just 5 FGA. Kyrie in 36 minutes contested just 3, and Tatum just 3 in his 26 minutes. I don’t know why, but whenever the Celtics play these shitty teams, they feel as though they don’t have to give a full effort on the defensive end, despite having proof that this sort of approach almost never works for them. That is why shit like this is so frustrating to me. I get it, shots may not fall on a given night, but there is no reason to not be playing with energy at home in a game in mid December. You should not be tired.

– Now let’s talk about the rebounding. Perhaps it was a bit unfair to assume the Celtics were just going to go from being the worst rebounding team in the history of the sport, to suddenly dominating like they were to start the season. Much like their defense, some regression was to be expected. But this, what we’ve seen so far in December is inexcusable.

So far in December, the Celtics are DEAD LAST in REB%. The first two months where all they did was win, they were 8th in the league. Add this with the drop to 19th in Drtg in December, and is it really all that surprising that they are struggling? Again, defense and rebounding tell the story.

– I think we can all agree it’s really really fun to watch Kyrie go off offensively. He does shit on that end that you don’t see very often. However, I hated the approach last night. The Celtics got this great start from Horford offensively, and then basically went away from him. This team has the talent around them that they don’t need Kyrie to have the offensive approach he did in this game. I get it, guys weren’t making shots, but they also avoided Horford for basically an entire quarter. He had 1 FGA through almost the entire third, while Kyrie had 9 FGA. It’s almost as if they totally forgot what worked in the first quarter. When the Celtics play like this they become one dimensional, and guys get out of rhythm. For me, there was too much standing around and watching Kyrie go to work, and not enough ball movement, cutting, extra passes, things that the Celtics usually do when they are playing their best basketball.

In the first half, they had 7 assists on 15 baskets, in the third quarter, 4 assists on 11 baskets. This is frustrating to me. Part of it is guys missing shots, but the other part is approach.

– Safe to say Marcus’ 3-13 did not help things one bit. Usually when he has games like this shooting the ball, he’s doing a million other things that help bring value to his minutes. Last night was not one of those nights. But let’s not also forget that Rozier went 0-4 as well. With no Morris probably for a long time, these two cannot have offensive performances like this, they are too important to that second unit’s success.

– I could not even enjoy the Yabu three. This is probably what I am most upset about with this whole goddamn game. Yabu threes should bring nothing but joy, but when I saw it, I felt nothing. I hate that.

– Turns out starting a quarter 0-11 is not good! The Celtics tied their second lowest quarter scoring mark in that second quarter with 13, and it really should have been their worst if not for that Kyrie three at the end. How is it possible that NBA players can have a quarter in which they shoot 19/16%? Add in the fact that they played almost no defense, no kidding the Jazz blew the game open.

Here’s the worst part, while the second unit was bad, they went 0-6 in that quarter, it was the starters too. Kyrie and Al both played at least 7 minutes, and went 3-10. The Celtics have to figure out a way to not become the worst team on earth in the second 12 minutes of every game. I bet if you looked at all their 7 losses, you’d see a pretty common theme.

– The Celtics had a chance to come back in this game, but it was poor decision making that ultimately cost them. For example, the Celts had started to get some stops and momentum in the fourth, and here are the shots that followed

A Larkin 20ft pull up when he had more room to drive: Miss

A contested Kyrie turnaround fadeaway from like 17ft: Miss

It was during that stretch that we saw Ingles make some threes, or the Jazz get OREB and score. When you’re trying to come back from double digits in the fourth, shot selection is extremely important. A poor shot may as well be a turnover, and I thought that stretch really impacted how things went.

– UTA had nearly twice the TOs, fewer points in the paint, and essentially the same 2nd chance points and they won comfortably. That’s annoying as fuck.

– Something tells me a bench scoring difference of 50-26 is a problem. Granted, we all should have seen the Jonas Jerebko revenge game coming. 17/7 on 6-8, he lived up to his Swedish Larry Bird nickname. Where was this last year in the playoffs amirite?!?

Good news is the Celts get right back to it against MEM who is terrible. Bad news is they love losing to terrible teams so who the hell knows what to expect. I want to say the Celts will come out with great energy, but that’s been impossible to predict this month. To me this is mostly a bad stretch, just like how they had a really good stretch to start the season. Maybe they aren’t as good as the Oct/Nov Celtics, but they certainly aren’t as bad as the December Celtics. Brad will figure it out. I trust that at least. Now, say it with me 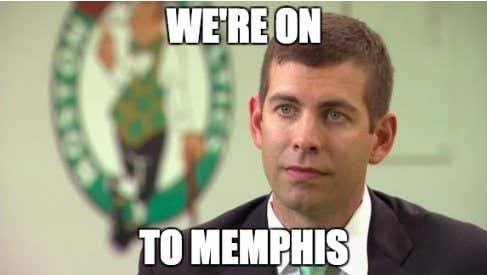