GET THE FIGHT HERE

Tex. He may be the only the only human on Earth who has the body of a 10th grader with a tobacco addiction and the mind of a batshit 300 Spartan warrior with CTE. Feits wrote a blog about how Hank has been poked, prodded, and bullied by Lord Portnoy for years and is ready to EXPLODE. And I’m not denying that fact. All I’m saying is Tex has seen some serious shit, too, and he’s drastically changed through the last year at Barstool HQ. The man is ready for a fight not just at anytime, but now more than ever.

Let’s take a travel through past losses that added up to this point tonight. Every since he first stepped foot into the Barstool office, Tex has yapped his little dip filled lips all over the place with every intention to back it up. We did what we could to control him AKA shut him the fuck up, but to no avail. Eventually I had to step up and put him in his place to either shut him down, or even better, make him into something more. It all started off slow with an arm wrestling match, but then devolved to him guaranteeing he could tackle someone twice his size on the gridiron:

And thus, we had a mission to turn tex into something more. We’ve had our missteps. And by that I mean grown adults, Ebony, Feits and KFC someway, somehow allowed Tex, a soft 5’8, 160, to fight Buffalo Bill, a GOLIATH who’s 6’4, 260lbs. The results turned out exactly how’d you expect: 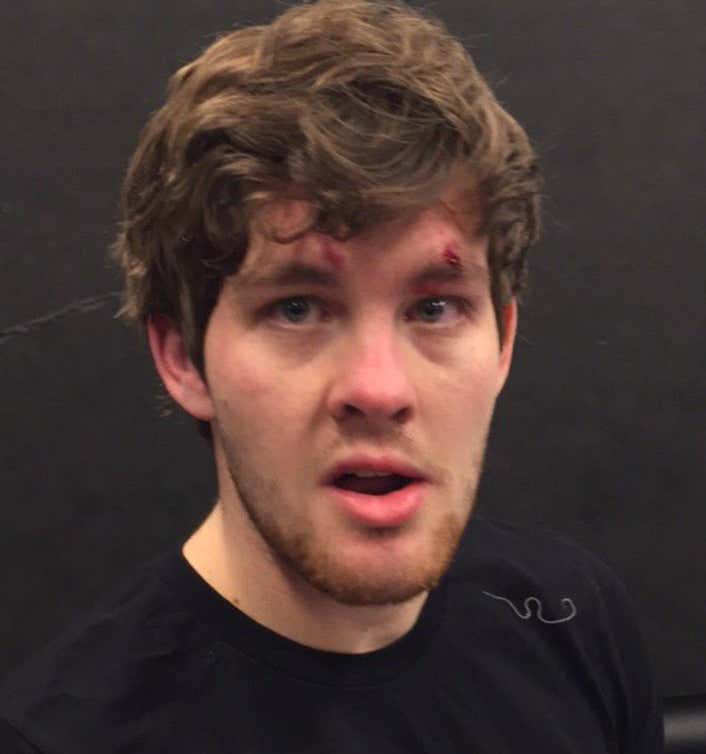 Not the best look. It only got worse when we went to the world’s largest pillow fight…and Tex decided to show up in full Confederate Uniform. Why? I honestly don’t want to know why. He then received concussions 6-8 during that adventure:

We then tried to get him back to his Texan roots for an easy W with a little bullriding competition. Right in his wheelhouse, right?

Wrong. This kid can’t do anything right. Shit, he doesn’t even know what shoe size he wears.

But it doesn’t matter. Tex is gonna Tex and not back down from anything. That was even more evident when he agreed to his first Rough N’ Rowdy battle, even though somebody told him he was a billion concussions deep. Here we are shooting a promo(?) for that event:

It’s so, so satisfying chucking beanbags at point blank range at ANYONE, let alone Tex. I simply couldn’t hide the giddyness in my face. But alas, his Billy Mumprhy unbridled enthusiasm for the first fight led to his downfall, hard hittin’/spittin’ Chris Bennett overcame Tex with a TKO:

By this time we all know Tex’s elevator doesn’t go all the way to the top. Heck, I’m surprised if it’s still operational. That was all evident from when I followed him around Alabama like a wild animal in National Geographic (MUST READ blog if you want to know the inner workings of Tex). Here he is in charge of doing a required promo for Bud Light. Sweet sound, brah!

And it was even more evident when he attempted to play poker and naturally took a hot mic into the shitter (The literal stream starts at 55:00):

Annnndddd the most evident when Tex debuted his 4 min podcast. Enter his beaten and battered mind at your own risk.

Now, has Tex ever won? That depends on your definition of winning. Did he barely outscore some idiot in a NCAA Fotoball ’07 Taze Match and recruit a Gay Gumby to put up 20 and 10 for his (racist basketball team name redacted) to win by 1 point over the Barstool Purple Starfish? Maybe.

Regardless, these are solely my experiences with Tex. Much like my monkey Nate, I love the thing. Not necessarily like a brother or a friend, more how someone can love a gerbil. But the love is there. And I’m hoping for the best for him tonight. Do I think he wins? Well, my mind is with Hank, but my heart is with Tex. Never go against the underdog, especially when he’s a certified wildcard. Go get ‘em, Boy.

GET THE FIGHT HERE 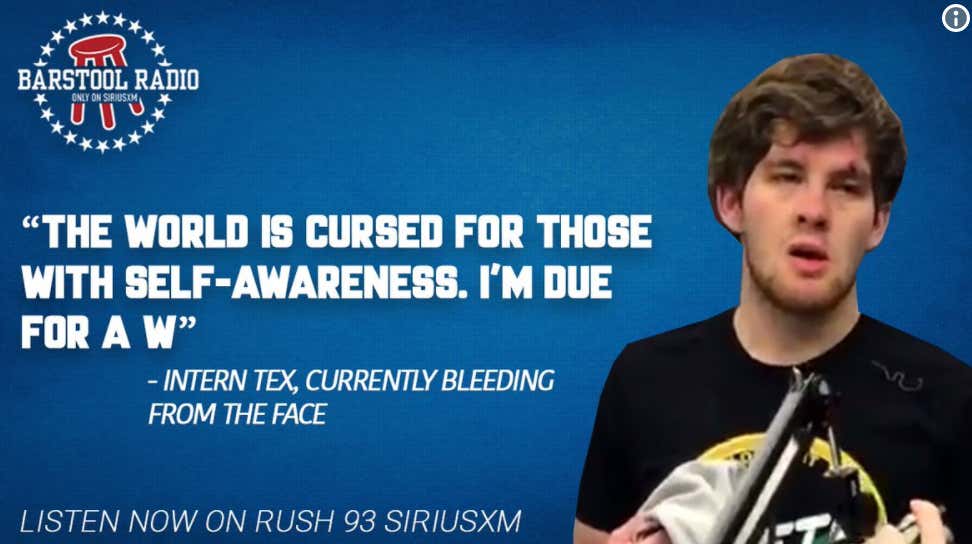 PS – Forgot about Tex purposely falling off the treadmill last year. That was cute.