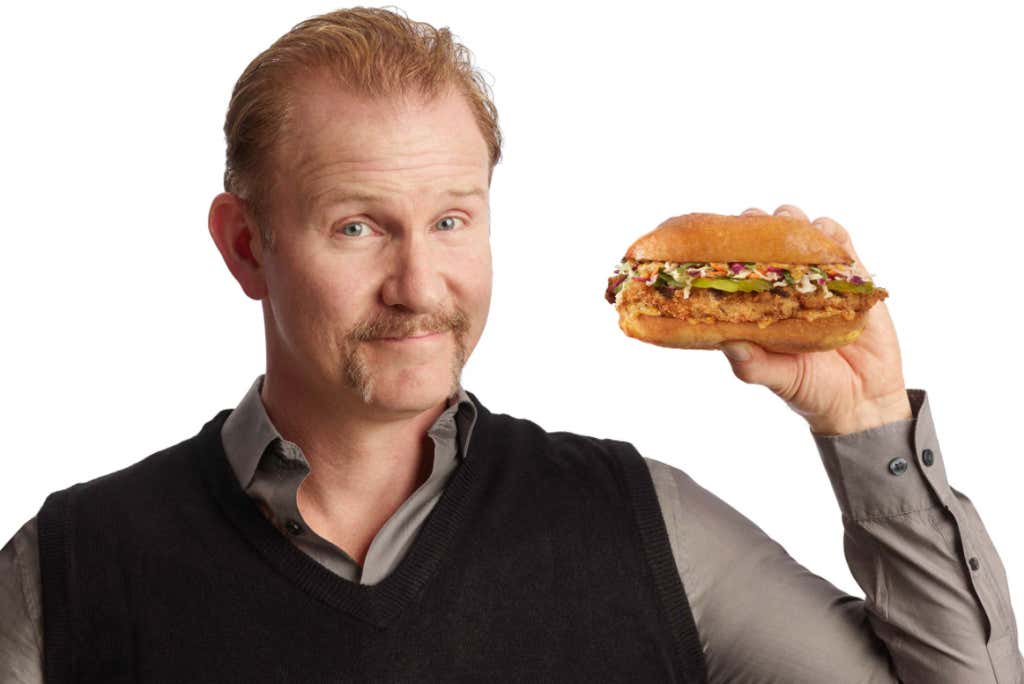 USAToday- Morgan Spurlock submitted a Hollywood confessional on Wednesday, revealing his own tales of sexual misconduct in the workplace — and outside of it.

The ‘Super Size Me’ documentarian, who recently sold his sequel Holy Chicken! to YouTube Red for $3.5 million, said that as he watches “hero, man after man, fall at the realization of their past indiscretions, I don’t sit by and wonder ‘who will be next?’ I wonder, ‘when will they come for me?'” That fear prompted Spurlock, 47, to tell all in a lengthy Twitter post.

Oh! Okay? I guess? Morgan Spurlock, the dude from ‘Super Size Me’, a classic Hollywood picture, has confessed his history of sexual misconduct with females in the industry with a long post on ‘TwitLonger’, a website that sounds like it’s used by perverts. Nobody accused him of this, but I guess the guilt has gotten to him and he had to get it out of his system. Let’s take a look at his post…

As I sit around watching hero after hero, man after man, fall at the realization of their past indiscretions, I don’t sit by and wonder “who will be next?” I wonder, “when will they come for me?”

Off to a hot start with the fucking guy from ‘Super Size Me’ considering himself a hero!

You see, I’ve come to understand after months of these revelations, that I am not some innocent bystander, I am also a part of the problem.

I’m sure I’m not alone in this thought, but I can’t blindly act as though I didn’t somehow play a part in this, and if I’m going truly represent myself as someone who has built a career on finding the truth, then it’s time for me to be truthful as well.

Wow, this is gonna be a pretty honest post. Spurlock calls himself “part of the problem” so you have to assume he’s about to confess about mistreating some women on sets, possibly making crude comments, maybe even worse? Yikes.

Over my life, there have been many instances that parallel what we see everyday in the news. When I was in college, a girl who I hooked up with on a one night stand accused me of rape. Not outright. There were no charges or investigations, but she wrote about the instance in a short story writing class and called me by name. A female friend who was in the class told be about it afterwards.

Oh no! What in the shit?! Why is he getting accused of rape?!

“That’s not what happened!” I told her. This wasn’t how I remembered it at all. In my mind, we’d been drinking all night and went back to my room. We began fooling around, she pushed me off, then we laid in the bed and talked and laughed some more, and then began fooling around again. We took off our clothes. She said she didn’t want to have sex, so we laid together, and talked, and kissed, and laughed, and then we started having sex.

Annnnnnd he had sex with a drunk woman who pushed him off of her while he tried to have sex with her, after she told him she did NOT want to have sex with him. Yeah. That’s rape dude. Any way you slice it. “Part of the problem” is now reading like the understatement of the century.

“Light bright. That kids toy, that’s all I can see and think about,” she said … and then she started to cry. I didn’t know what to do. We stopped having sex and I rolled beside her. I tried to comfort her. To make her feel better. I thought I was doing ok, I believed she was feeling better. She believed she was raped.

“She believed she was raped” because you raped her. That’s why she believed that. Got it? Good. Let’s see what else is in here.

Then there was the time I settled a sexual harassment allegation at my office. This was around 8 years ago, and it wasn’t a gropy feely harassment. It was verbal, and it was just as bad.

I would call my female assistant “hot pants” or “sex pants” when I was yelling to her from the other side of the office. Something I thought was funny at the time, but then realized I had completely demeaned and belittled her to a place of non-existence.

So, when she decided to quit, she came to me and said if I didn’t pay her a settlement, she would tell everyone. Being who I was, it was the last thing I wanted, so of course, I paid. I paid for peace of mind. I paid for her silence and cooperation. Most of all, I paid so I could remain who I was.

I am part of the problem.

WHAT. THE. FUCK. What got into the FUCKING ‘SUPER SIZE ME’ GUY that made him believe this was okay? This was barely okay in the 1920’s! “Sex pants”?! What does that mean?! As far as I know you don’t wear even pants when you have sex. I could be wrong, but that’s my understanding of the sex. He’s gotta stop with the “part of the problem”, too. He is the problem.

And then there’s the infidelity. I have been unfaithful to every wife and girlfriend I have ever had. Over the years, I would look each of them in the eye and proclaim my love and then have sex with other people behind their backs.

I hurt them. And I hate it. But it didn’t make me stop. The worst part is, I’m someone who consistently hurts those closest to me. From my wife, to my friends, to my family, to my partners & co-workers. I have helped create a world of disrespect through my own actions.

And I am part of the problem.

Okay I hate this non-monogamous (alleged) raping shitbag with the fury of a thousand suns.

But why? What caused me to act this way? Is it all ego? Or was it the sexual abuse I suffered as a boy and as a young man in my teens? Abuse that I only ever told to my first wife, for fear of being seen as weak or less than a man?

Is it because my father left my mother when I was child? Or that she believed he never respected her, so that disrespect carried over into their son?

Or is it because I’ve consistently been drinking since the age of 13? I haven’t been sober for more than a week in 30 years, something our society doesn’t shun or condemn but which only served to fill the emotional hole inside me and the daily depression I coped with. Depression we can’t talk about, because its wrong and makes you less of a person.

And the sexual daliances? Were they meaningful? Or did they only serve to try to make a weak man feel stronger.

I don’t know. None of these things matter when you chip away at someone and consistently make them feel like less of a person.

I am part of the problem. We all are.

Hey pal, I’m sorry you went through some messed up shit at a young age, but it is in no way an excuse for your behavior as an adult. Most people are able to use childhood trauma as an example of what NOT to do in life, not what to emulate. They reach out to people and try to get help. Coming out as a victim this far deep is like Kevin Spacey giving us the ol’ “Hey look over here I’m gay I’m SO gay I’m sucking a dick right now please forget about my sexual abuse of young boys!”

But I am also part of the solution.

I’m done. Not reading whatever comes after that. Morgan Spurlock is a gigantic piece of garbage who’s no better now that he said this than he was beforehand. He made ‘Super Size Me’, got McDonald’s to take away our option to Super Size meals, (allegedly) raped a girl, used the term “sex pants”, and now he’s trying to insert himself into a pool of high profile A-listers by confessing this. I highly doubt his intentions are in the right place by coming out like this.