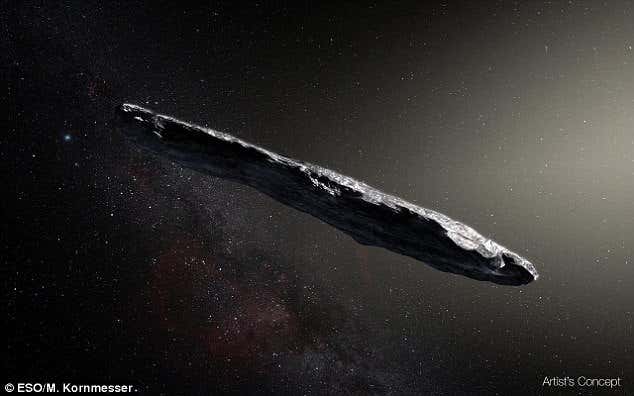 The Atlantic — The email about “a most peculiar object” in the solar system arrived in Yuri Milner’s inbox last week.

Milner, the Russian billionaire behind Breakthrough Listen, a $100 million search for intelligent extraterrestrial life, had already heard about the peculiar object. ‘Oumuamua barreled into view in October, the first interstellar object seen in our solar system.

Astronomers around the world chased after the mysterious space rock with their telescopes, collecting as much data as they could as it sped away. Their observations revealed a truly unusual object with puzzling properties. Scientists have long predicted an interstellar visitor would someday coast into our corner of the universe, but not something like this.

“The more I study this object, the more unusual it appears, making me wonder whether it might be an artificially made probe which was sent by an alien civilization,” Avi Loeb, the chair of Harvard’s astronomy department and one of Milner’s advisers on Breakthrough Listen, wrote in the email to Milner.

A lot going on here so let me break it down for you nice and simple like. This Russian billionaire is obsessed with space and finding aliens so he created some organization with $100 million several years ago with the goal of scouring the sky for signs of aliens and he believes this new interstellar comet that just randomly arrived in our solar system could be an alien spaceship.

Pretty scary to be honest. This long, skinny ass comet just shows up and could be an alien spaceship? Don’t like that one bit. Yes the space junky in me gets a little giddy at the thought. Riggsy Astronomy’s ears perk up. I’ve long said aliens are really the only thing left that’ll move the needle for NASA but if you actually look at this artist’s rendition of the comet (spaceship), take a step back, and consider what’s potentially going on here, you can really only reach one conclusion — not good!

What the fuck could this alien spaceship possibly be cruising into our solar system for? Just to hang out? Say what’s up? Buzz the tower? No fucking shot. If you’ve ever seen a movie you know that alien spaceships showing up unannounced is never good. NEVER. Ever. Not even close. Alien spaceships show up to earth to destroy humans and use our planet and that’s it. They don’t send probes as Michael Scott gift baskets.

You might be rooting for this thing to be an alien spaceship and, if you are, you are an idiot. Please let this be a meaningless rock floating through space. PLEASE. I got a pretty good thing going where I just blog about Trump then play sweet golf courses all the time. It’s great. Don’t need aliens fucking it all up.

I’m all in on us spotting aliens on far away worlds, pointing, and saying, “Oh cool look! Aliens way the fuck out there! We’re not alone!”

And I am all out on aliens showing up at our doorstep out of the cosmic fucking clouds in some scary ass skinny spaceship. No thank you.