Authorities said they responded to a crash report on Route 28 near Frying Pan Road at about 3:30 p.m.

They say the man faces multiple charges after causing major traffic delays during rush hour. Police say the man got into a crash with another car, but then got out of his car and assaulted the other driver who was involved before he taking off his clothes and jumping onto a truck.

At first I thought this was just your run of the mill naked guy in the street after a car crash video. On second watch, it’s much different. Our pal here got naked on the side of the rude and then things really got out of hand. Look, you wanna show your giblets to the world, that’s on you. They’re your giblets after all.

But can we also recognize that safety is paramount on the roadways? You wanna be naked on the shoulder of the road, be my guest. You wanna parade in the median with your dick out for the world to see? That’s you’re right.

Riding on the roof of a snow-covered truck is just flat out dangerous. 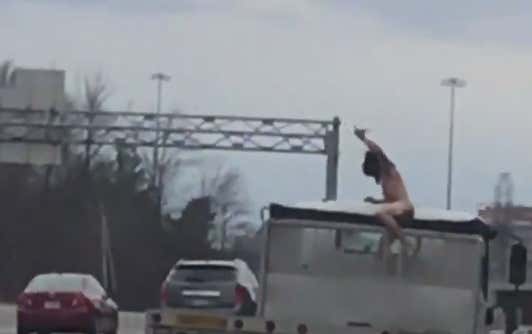 The testicles are covered with thin skin. You’re opening yourself to all kinds of hypothermia if you tea bag a snowy roof with those bad boys. Riding in that cold wind is also dangerous, as well. If you’re gonna be naked in the winter, do it on the ground. That’s all I’m asking because I care about you. Merry Christmas and Happy Hanukkah, folks.