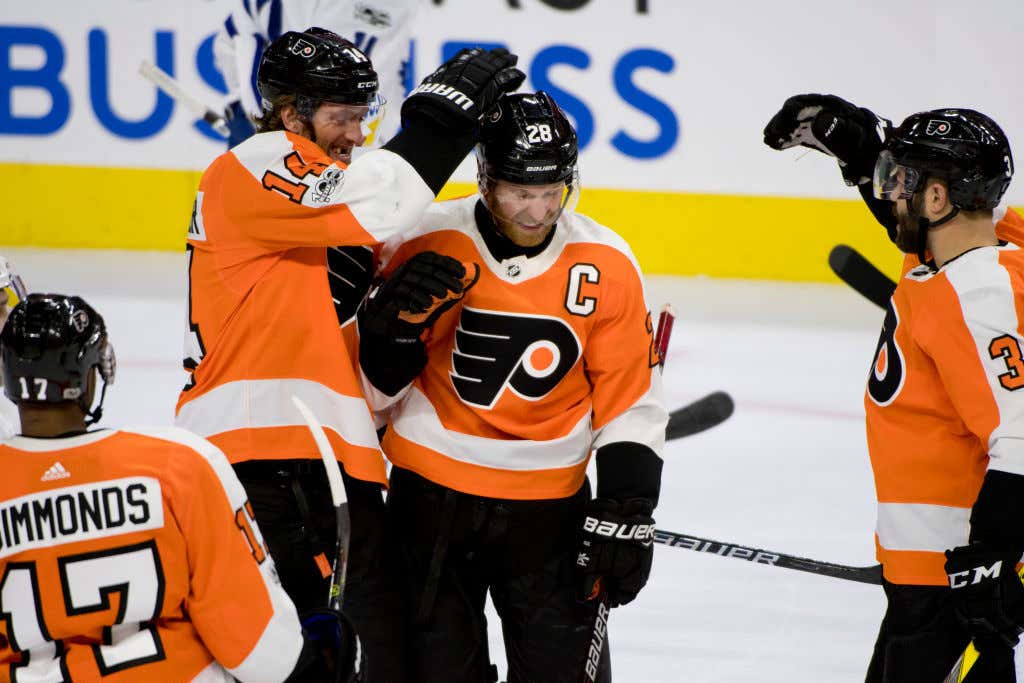 Somehow, some way, the Philadelphia Flyers went through a 10-game winless streak and they’re still only 4 points out of a playoff spot in the East. A 10-game winless streak that saw everybody in the city calling for Dave Hakstol’s job, had everybody in the city questioning Ron Hextall and had the Flyers getting boo’d out of their own barn at home. The Flyers reached their lowest point since the 2008 season and it got to the point where I would spend hours a day watching nothing but Rasmus Dahlin highlights on YouTube. And then the team went on a 3-game road trip to Western Canada. They got 3 straight wins and swept the Flames, Oilers and Canucks. They then had a few days off, coming back to Philly for a 5-game home stand and looking for their 1st win at the Wells Fargo Center since November 9th. Looking for their 4th straight win against a Canadian opponent. Then Claude Giroux and Sean Couturier happened.

I talked about this goal earlier in today’s Quick Shifts video. But good god that was one of the more beautiful goals we’ll see all year. The puck starts on Shayne Gostisbehere’s stick at the Flyers’ goal line with 3 minutes left on the clock. He then sends it up the boards to Wayne Simmonds who then one-touches it to Claude Giroux. Captain Claude then one-touches that between his legs, between Nakita Zaitsev’s legs, leads Couturier perfectly and then Sean 1Couturier snipes his 15th goal of the season, just 5 seconds after Ghost had the puck on his stick. Couturier has never scored more than 15 goals in a season so far and now he has 15 before Christmas.

What we’ve seen over the last 4 games from the Flyers is a team that is starting to gain some confidence back. It was clearly evident how they were running on empty during that 10-game skid. The continued to find new ways to lose, they had guys like Jake Voracek putting out quotes saying “everything we touch right now turns to shit”. It’s hard to win games in the NHL if you have a locker room full of guys who are constantly thinking they’re going to end up losing. But over the last 4 games? You can see how much has changed. The confidence they have now allows them to play faster, be more decisive with the puck, and they’re catching a few lucky breaks while they’re at it. And while the top guys like Giroux and Coots and Ghost and Voracek have been producing all year long so far, it’s nice to see how much this new confidence is rubbing off on some of the other guys.

Much Needed Boost For Travis Konecny

It’s obvious that Travis Konecny and Nolan Patrick have both seen their roles diminish a bit over the last few games. Konecny got 10:42 TOI last night and Patrick clocked in with 12:28. At the beginning of the season I think that most Flyers fans were hoping these guys would develop into top-6 players by the holiday break, with the top line being 28-14-93 and the second line being 11-19-17. That hasn’t happened and they’ve both been finding themselves stuck on the bench especially when the team is trying to hold on to a lead. Guys can say all they want that lack of ice time doesn’t bother them and that they understand why they’re not on the ice more. But these kids are professional athletes and you only get to the highest level by having an intensely competitive nature. Nobody is happy with being on the bench. So to see him get swapped onto the line with Laughton and Leier last night and score a big time goal to tie the game up at 2-2 early in the 3rd period was huge.

Also–just watch that top GIF of the Konecny goal again. Look at how fast Konecny is able to buzz around the offensive zone with the puck on his stick. And then also watch Robert Hagg. I’m not sure if this was his intention or not but Hagg ends up setting a great pick on Marner and Borgman that opens up the space that Konecny needed to get a shot off. Good things happen when you put pucks on the net.

Nothing ended up coming from this play but I love how improved Michael Raffl’s game has been since getting put on the 2nd line with Voracek and Filppula. He’s making great decisions with the puck. He’s driving play. And most importantly he’s not making any mistakes out there while playing with one of the best forwards in the league right now. He had 3 straight game winning goals during that Western Canada trip and looked just as solid last night. It’s amazing how much different this team looks when they’re not out there constantly waiting for the wheels to fall off.

Sean Couturier went 78% in the faceoff dot last night and no faceoff win was bigger than this one that ended up being an assist to Claude Giroux. Set play off the draw, Captain Claude steps in and fucking RIFLES that one past Andersen. Again–this is what you get when you slide Sean 1Couturier up to the top line and bump Giroux over to the wing. I don’t know how many right-handed shots the Flyers have on their roster that can get that shot off so if you have Giroux taking the faceoff from that circle, you’re just praying you get it back to the point for a lefty like Provorov or Ghost to tee off. Either way, the Flyers were obviously happy with this goal but I think Mike Babcock was less than thrilled to say the least.

Not sure if Babcock was pissed at the linesman for kicking Marleau out of the draw which led to Hyman getting toasted by Coots. Or if he was just pissed at the way the linesman dropped the puck or what. Either way, if that linesman goes missing at any point in the next week or so, I think we know who to start the investigation with.

– It was great to finally see Dadko Gudas back in the lineup.

Say what you want about Radko Gudas and his “allegedly” dirty hits throughout his career. But that doesn’t change the fact that he’s a game changer out there and the Flyers are a better team when he’s on the ice. He wasn’t perfect last night but you’d expect a little rust from a guy who just had to sit in the press box for the last 10 games. But like I said, the Flyers are always better off when he’s in the lineup than when he’s suspended. For the fancy stats crowd out there, Gudas ended the night with a 62.36% score-adjusted Corsi. Can he be a dirt ball at times? Absolutely. But he’s a very effective dirt ball.

– And listen. The Flyers still have plenty of issues they need to address. They looked great last night, don’t get me wrong. They played fast, they played confidence, they made the most of their opportunities and they limited the Maple Leafs’ significant chances. Still, this team seems to struggle getting through the neutral zone at points, they still seem to be doing a lot of chasing in their own zone, and then there are some younger guys in the lineup like Travis Sanheim who still need to adjust to the speed of the NHL a bit and realize they don’t have as much time to get back as they did in junior. Do I think that the Flyers are at a point where if they get themselves into the playoffs they can legitimately contend? Ehhhhh not yet. But the issues facing the Flyers right now seem much more manageable than they did just a week or so ago.

Flyers have Buffalo at home tomorrow night. I know they’re still not in any position where there are teams that they “have to beat”, but this is one of those games. The Sabres are a mess right now, the Flyers are hot, they really need to keep this streak going by taking care of a weaker team.

P.S. – Yes. I am very much aware that ever since the Flyers started winning again, everything has been going to shit for the Eagles.