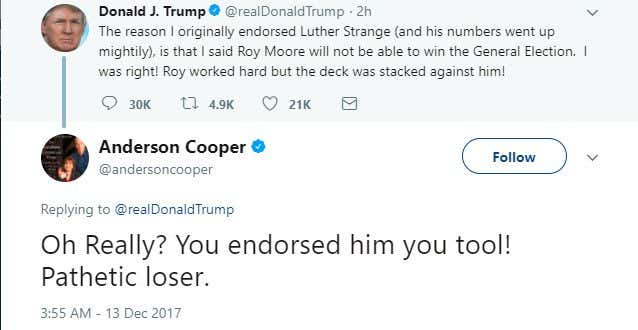 Well, goodness gracious, Anderson. It appears as though staying up late for the coverage of the Alabama Senate race last night caused Anderson Cooper to be super fussy this morning. He probably didn’t have his coffee yet, rolled over, and fired off the first thing that came into his silver-fox head ass. Or, he was hacked.

I kinda believe Anderson that he didn’t actually say that. Anderson seems like the kinda fella who knows how to use commas to offset at the end of a sentence. But then again, he knows that we know that he knows how to use commas in order to offset at the end of the sentence. Maybe he included some obvious and uncharacteristic grammar mistakes to throw us off the scent. Wont work though. We were ready. Have a cup of coffee, Anderson. Stop being ugly the first thing in the morning.

As required with any Anderson Cooper blog, here’s the giggle reel.