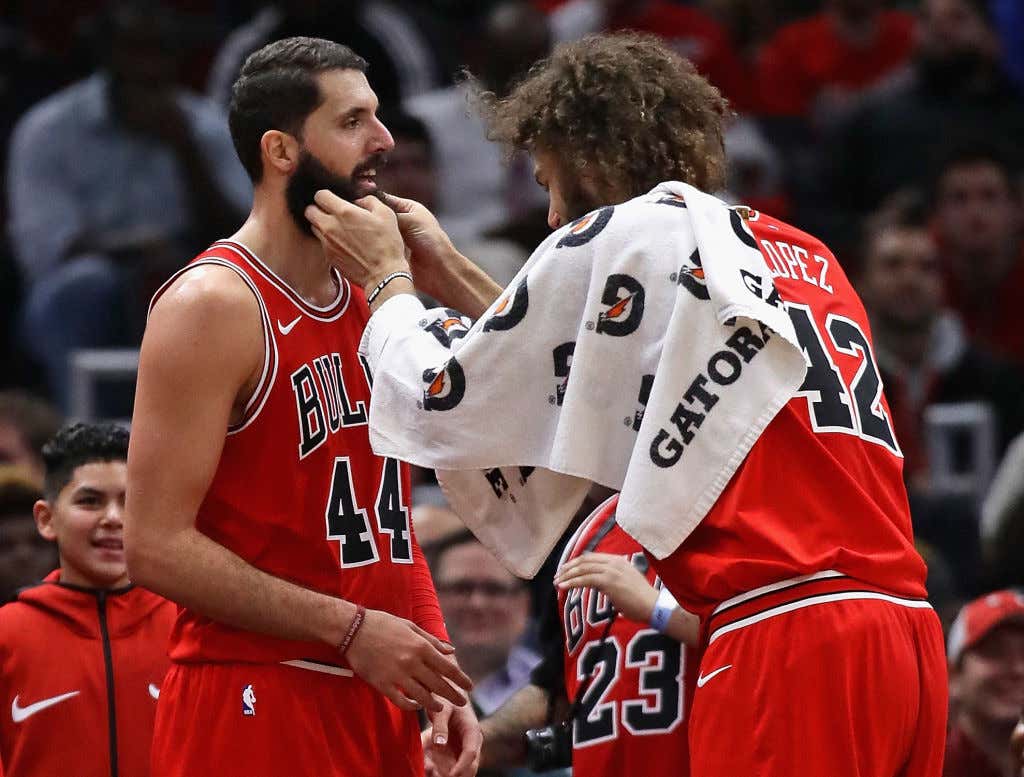 Let me try something. What if I told you that CHI has the second longest winning streak in the East at the moment, and currently has a better record than CLE over that span? Did that make you feel better? No, me either, but it was worth a shot.

The Celtics should be embarrassed. Yes, it was a back to back and you didn’t have guys like Kyrie and Morris available, but since when should that matter when you’re playing a team with 5 wins? Are we saying this team isn’t better than a CHI team that was also missing Baby Dirk unless those two guys play? Give me a break. The Celts got their asses handed to them, and it was the first time this season that they’ve had one of these games. Almost every team has em, I mean CLE has lost to BKN/ATL, GS lost to SAC, TOR has lost to the Knicks/LAC, this kind of shit happens, so it’s not the END of the world. At the same time, it’s extremely frustrating because the Bulls are fucking trash.

We can’t just come on this blog and pump our chests when things are great, the Celts are winning all these games in a row, and live in some fantasy world where we ignore when they play like complete dogshit. So, while it will probably make you mad, the same way I’m getting worked up as I type this, we have to talk about it.

– I did like the two man game between Smart and Al, they’re basically becoming the Lob City of the East Coast

– If you can believe it, this game wasn’t always a complete disaster. The Celtics actually got off to a good start, with 29 points on 52/50% splits in that first quarter. That was cool. They then went on to completely shit their pants, but that first 12 minutes was actually watchable (after they missed their first like shots).

– The statement jerseys are still sweet, despite the result. Yes, I am stretching looking for something positive to write, so what?

– OK let’s start with the basics. The Bulls average 97 points a night which is the second lowest in the NBA, and as a team shoot with 42/34% splits. That FG% is the lowest in the NBA, and that 3P% is 4th worst. Naturally you would think that an elite defensive team like the Celtics would have no problem defending a team that essentially cannot score.

You would also be incorrect.

How does 10 points over their average, with 48/41% splits sound? They also turn the ball over 14 times a night, and had just 8 in this games. So no, it does not appear that the defense made the trip to Chicago, and that’s where I get frustrated. You want to talk to me about how poor the offense was without Kyrie (we will), I am all ears, but there is NO excuse for the defense, or lack thereof, that we saw in this game. Horford played right? Smart was out there, Rozier and Semi too? Theis played? Jaylen stepped on the court? Tatum? Yes, losing a hobbled Marcus Morris hurts you, but let’s not act like this roster did not have for the most part, its best defenders available.

For me, it was an effort thing. The Celtics were a step slow all night, did not show any aggressiveness on the defensive end, and next thing you knew they had given up 100 points with nearly half the fourth quarter to go. No excuse for what we saw, none.

– It finally happened. Jayson Tatum finally struggled from the floor. He went 1-7 (0-4) and close your eyes….but is currently down to 50/50% splits. It’s horrific, I know. This was also the first game since the second and third games of the season that Tatum attempted a three, and did not make at least 1. So as you can see, things were very weird. He did have 10 rebounds though, so there’s that!

– What is it about playing the Celtics that turns Bobby Portis into like KG or some shit? 23 points on 10-15 shooting, and 3-3 from deep, this was like that playoff game all over again when he literally could not miss. For a large portion of this game, he outscored the entire Celtics second unit. He played 17 games so far this season, so naturally the best performance of his year would come against the Celtics, that’s usually how it works. 6 of his 10 baskets came from outside the paint. That’s annoying as fuck.

As good as Theis has been playing defensively, he had no answer, and I would say no Celtic big had an answer which is confusing. This is Bobby Portis we’re talking about here. He was very close to being out of the fucking NBA for christ sake.

– There are few things more frustrating then when this team plays careless basketball, and that’s how I would explain how the starters played. They played careless and disinterested, and guess what, it bit them in the ass. Of their 15 TOs, 11 of them came from the starters, including 7 from their starting backcourt. Baynes outta nowhere with 4, Marcus with 4 time after time they tried to force these passes into traffic, and then seemed surprised when they were stolen. I dunno, maybe pass it to where the other team isn’t or something next time.

– To no one’s surprise, the offense clearly lacked with no Kyrie in the lineup. You obviously miss his point production, but I think we also saw last night that without him, the Celtics don’t really know what to do. They reverted back to everything you should hate about the Celtics offense at times. For example, they took 83 FGA and 40 of them were from behind the arc. That rarely works out, and the problem with that is they had nobody attacking the basket, resulting in just 14 FTA (missed 5). It’s not exactly a wild claim to say that the offense was worse without the best offensive player on the team, but I’m confused as to why the Celtics didn’t adjust to address that.

I mean I get it, guys probably feel like they have to step up, but 7 3PA from Rozier, and 5…FIVE from Nader? Hell Smart took 6 himself but at least he made half of them. Even without Kyrie, where was the ball movement? Where were the plays where you dump it down to Horford and you move without the ball and cut to the rim? It was almost as if every single player forgot the entire playbook. Part of that is on the players, and part of that is on Brad in my opinion.

– Let’s be honest, the Celtics lost this game when they allowed a 22-2 run in the second quarter, where they scored 13 points. I’d say that’s the lowest of the year, but they scored 11 in that quarter against CHA when Kyrie first got hurt. This is why I get bothered when people say “oh if we had Kyrie we probably win”. Well guess what, this all happened during a time in which Kyrie would be getting normal rest. You think Brad would have put him back in for heavy minutes on the second night of a B2B against CHI? Probably not, he’d probably go about things the same way for the most part. The problem was their second unit completely fucked them during that quarter, and really the entire game. Abdel Nader was playing like the was a goddamn CHI plant or something, and as a group they went 1-8.

On the other end, the CHI bench roasted them, for 23 points in the quarter. I’m sorry, but look at the defensive differences between the starters and the bench. THERE’S your ballgame to me 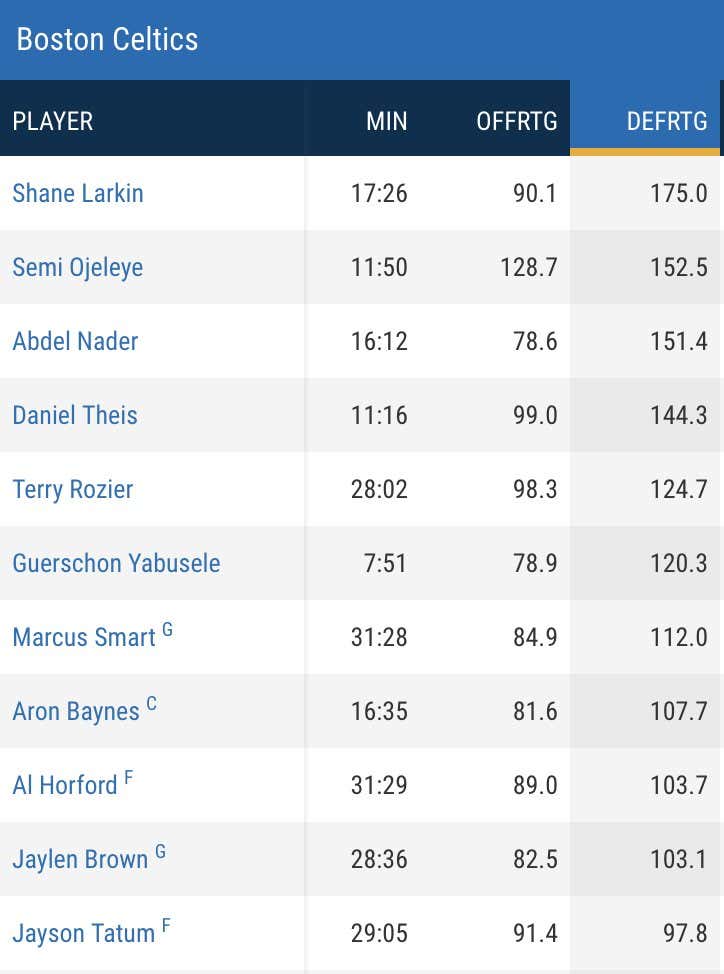 If this wasn’t a display of why the Celtics need to use the DPE on bench offense, I don’t know what will be. Having to go with Nader is not showing to be ideal. I thought he had a great summer, and a solid D-League season last year, but I’m yet to see him come in a game for the Celtics and do something positive. I’ll take anything, but instead it’s been negative play after negative play.

– When was the last time the Celtics finished a game with just 2 steals?

– You would think that given all the games the Celtics have come back from, they would understand it starts on the defensive end, and you slowly chip away. You can’t make it all up on one shot, and yet the Celtics felt that the best way to get back in this game was to just jack up three after three. A strategy that rarely works out, and to me that’s just lazy basketball. I hate when they play lazy basketball.

– Am I the only one who rolls their eyes when I hear the term scheduled loss? Last time I checked the Celtics are made up of a bunch of 20 somethings and a teenager. It’s December, and we’re talking about being tired? I get it, the schedule is daunting and all that crap, but this felt more like the Celts approached this game like they could just wake up and beat CHI, instead of realizing every team is going to be gunning for them and you actually have to try.

– I will say, I did enjoy my mentions with the “OHHHHHH HOW BOUT HORFORD NOW” nonsense because I feel like he’s been their best all around player. Somehow people didn’t want to tweet me that when Kyrie went 4-12 and didn’t score in the 4th against DET the night before, or the time they beat TOR w/o Kyrie and Horford went 8-9.

Look. It’s simple. Kyrie is the best player/best offensive scorer/best closer. Al Horford has been the better all around player through this point of the season. They don’t have this success without either of them playing at an extremely high level. Both of those things can be true, and I don’t see why people get so worked up about it. Kyrie has been NAILS over the last 15 or so games…and so has Horford. In fact, Horford has the better offensive rating since 11/13 (15 games) and is in the conversation for DPOY. We’ve seen games in which Kyrie goes off and Horford struggles, and the Celtics lose, and we’ve seen games like last night where Horford is the main guy and they have a bad loss. This whole thing is so silly to me. 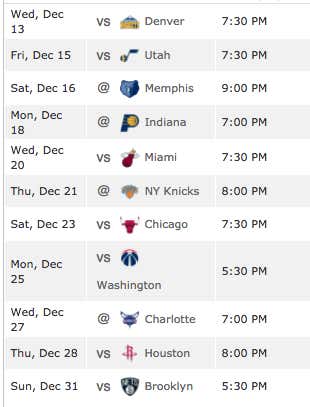 if the Celtics are tired now, what are they going to be in like a week/two weeks? Now it’s obviously better that Morris take care of it now, and be ready for the playoffs and shit, but that’s still going to be a loss that this team feels, especially on that second unit. See last night for any reasoning.

– At one point the Celtics were down 30. I just threw up.

Turn the page. That’s my only advice to you. Understand that this happens to every NBA team, and at least we made it to mid December before we experienced it. If you are of the thought that this team needed a wake up call, then I would say this qualifies. You can’t be getting out hustled and out played by a team that is trying to tank, simple as that. So do your best to forget last night every happened, and say it with me 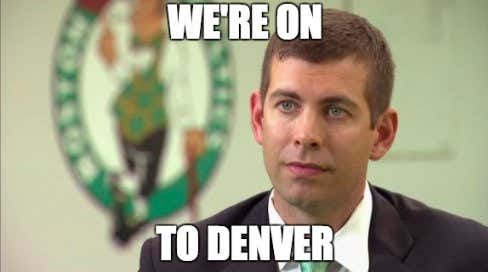