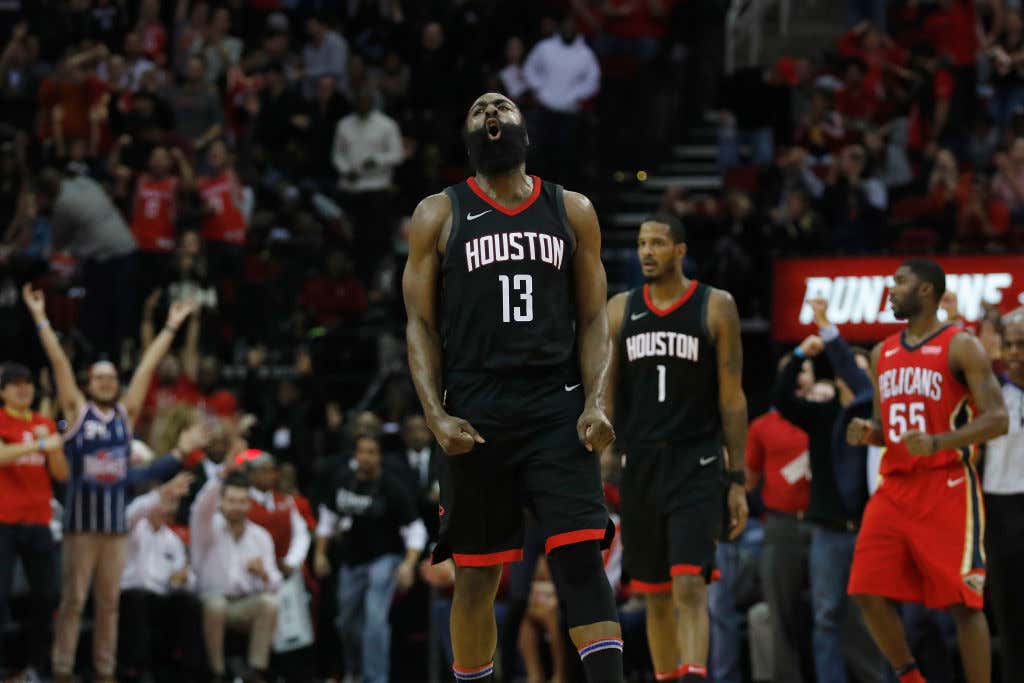 Welcome to another edition of Last Night In The NBA where we catch you up on everything that happened from the night before in the Association. Theres a strong chance you were watching the Pats get humiliated on national TV, and maybe you didn’t realize that there were also 6 games in the NBA. In a weird way, there was just as much humiliation as in the football game. Here’s what happened.

At this very moment, the Houston Rockets are the best team in the NBA. They showed this sort of promise in the preseason, and since they games started to count for real, they have been superb. With CP3, without CP3 it hasn’t mattered, but since his return they’ve now won 10 straight.

It’s virtually impossible to beat the Rockets when they shoot 54% from the field, make 17 threes, and also turn it over just 9 times. What makes them unique is that 45 of their 88 FGA were threes, but they also got to the line 25 times, not many teams can have that sort of combination. Obviously it was Harden that led the way, he had 26/1/17/6 in 35 minutes

then you probably look over during the game and say “thank god they are making a subsitituion”, followed by “oh fuck it’s Eric Gordon who just went for 27 points on 9-12 shooting including 5 made threes in 36 minutes off the bench”

For NO, I’m starting to love this three guard lineup. Jrue Holiday, Rondo, and Moore somehow work. On one hand you had Holiday going for 37 on 16-21

When someone thinks of the Pelicans, they think of their league best front court, but with Anthony Davis out with a left abductor injury, there was just Boogie. Now he did go for 24/14/8, so the story isn’t really about the starters. The story is NO’s bench, that scored just 3 points. How on earth, with no AD, did they expect to win with that sort of production?

At the end of the day, allowing Harden to score those 12 straight in the fourth probably wasn’t the best idea, but the Pelicans played the NBA’s best team pretty tough, which is encouraging to say the least.

Well, the Grizzlies are back to stinking again. There was that brief moment when they beat MIN to snap their 10ngame losing streak that you thought, he maybe they’ll win a couple now that the monkey is off their back! Nope, they’ve lost every game since. Even with no Whiteside in the lineup the Heat used a balance approach to get back to .500, with 7 players in double figures, and 56/51% splits with just 13 TOs. There’s some crazy stat out there about MIA’s shooting, but basically they almost never lose if they are above 40% 3P% or something like that.

Things were close after the first 12 minutes, but it was a wrap after that. The Heat are hovering around that 8-6 seed right now, which is impressive because they are doing it without arguably their best player. Their 8-7 road record is the best of any team in the East not currently a Top 8 seed, so you would think they’ll eventually find themselves in that group.

For MEM, you shot 38/29% and turned it over 14 times. The hell did you think you were going to beat with that? Just trade Gasol already, preferably not to CLE, but free the man would you.

Full blog is coming, and it’s not pretty. But basically….

I honestly cannot figure OKC out. They got PG13 back, had their full lineup, and can’t beat CHA….at home? OKC is supposed to be a lock down defensive team, and yet, CHA scored that many points and had 53/52% shooting splits. The Thunder had no answer for Dwight, who led the way with 23 points,

and they got off to a great start, and then had another great third quarter in which they won 40-22 and that was that

This was the Hornets first road win since Oct 30th, and they need to start tallying wins if they want to get back into the playoff picture. Beating the Thunder is certainly a start.

For OKC, I don’t know how you could call this anything other than another bad loss. Their Big 3 combined for 61 of the 103 which is nice I guess,

and while I get that they are just .5 games out of the final playoff spot and it’s no need to panic, they’re still underachieving. They’ve lost some coin flip games sure, but overall this offense is averaging 101 points a game, and the most they lose games like this, the more I worry CLE is going to flip that BKN pick for PG13 because who knows if he’ll want to stay.

For the sake of my sanity, I just need OKC to start fucking winning.

No Curry, no Draymond, no problem really. Must be nice to not have two players as good and as important as those two playing, and yet still smash people. I guess it helps when you have Kevin Durant who went for 28/9/5 on 11-21

some big moment threes from Klay who had 24

And to make it even better, David West even killed a guy!

Now get this. GS doesn’t leave California basically for the rest of 2017. I smell a giant run, even with their injuries.

For POR, tough one. You always seem to play GS close, but then they hit that extra gear against you. Happens to almost everyone so don’t get too down on yourself. Dame was still ridiculous with 39 points, and was fun as hell to watch

The bad news is besides CJ who had 21, no other Trail Blazer showed up, and they shot 42/25% as a team which isn’t exactly how you beat GS. Somehow, despite losing their not 5th game in a row, POR is currently the 7th seed, and they have a nice little break in their schedule that should hopefully get them back on track. I will say though, it is tough to lose every game on your 4 game homestand and then lose the first of what is a 5 game road trip. Yeesh.

I’ll admit it, I’m shocked, legit shocked that the Raptors lost this game. Winners of 6 straight going in, LAC being terrible, this was something I expected to be relatively easy for TOR. I guess going in I was unaware of one major factor….Milos returned!!

you remember Milos the passing God right? Happy he’s back and he did his thing with 12/6/7 and just 1 TO. The Clippers had a balanced approach with 6 players in double figures, and somehow were able to pull this out despite shooting 37/22%.

For TOR, they blew a 30-19 lead after one, and from there could never recover. Lowry/DeRozan combine for 9-26, and other than Valanciunas who had 23/15, no Raptor really was all that impressive

The good news is, it’s not as if TOR has hard teams left to play the rest of this month, so I think they’ll be just fine.

And that’s it! You’re now all caught up on everything that happened last night in the NBA. There are 7 games tonight, including DEN/DET, and PHI/MIN, we’ll also hopefully get to see Okafor’s debut against WSHm, but if you miss anything don’t feel sad, just come back tomorrow and I’ll tell you all about it.