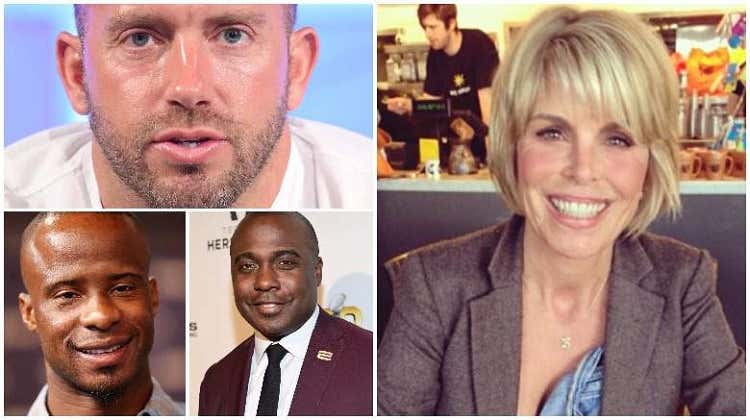 Heavy – A former wardrobe stylist at the NFL Network has accused several retired NFL players and a network executive of sexual misconduct in an amended lawsuit filed in court December 11.

Jami L. Cantor accused Eric Weinberger, who currently works as the president of The Ringer, of trying to sexually assault her on at least one occasion and sending sexually-explicit photos to her. She also accused on-air talent — Marshall Faulk, Eric Davis, Warren Sapp, Donovan McNabb, Heath Evans and Ike Taylor —
and at least one other employee at NFL Network of acting inappropriately in the workplace by sexually harassing and assaulting her on several occasions.

Weinberger – Sent her “several nude pictures of himself and sexually explicit texts,” she said in her lawsuit. Cantor also accused Weinberger of telling her that she “was put on earth to pleasure (him),” adding that he once pressed his crotch against her shoulder and asked her to touch it.

Faulk – “Instead of saying good morning, Mr. Faulk greeted (Cantor) by fondling her breasts and groping her behind,” the lasuire said. “As time went on, Mr. Faulk became more aggressive, such as inviting (Cantor) to his hotel room, stroking and pulling out his genitals in front of her, pointing to his crotch and asking Plaintiff, ‘when are you gonna get on this already?’” the lawsuit said. “He also pinned (Cantor) against a wall, demanding oral sex while he pulled his pants down.”

Evans – Accused of propositioning Cantor multiple times for sex and “repeatedly making lewd overtures.” Cantor said that Evans sent nude photos of himself to her “on at least two separate occasions.” She said in her lawsuit that Evans made several comments to her, including him saying that he “needed to get in (Cantor) deep and hard.”

Davis – “I want you so bad,” “my cock is so hard because of you right now” and “you look like you would be an animal in the sheets.” “I can’t handle your (butt), it is so luscious,” Cantor claimed … that he wanted to “choke” her from behind until she “begged him to stop.” … Cantor claims that one time while she was working on the set in the studio on a ladder, he grabbed her butt, sliding his hand in between her legs and touching her private area.

Sapp – Accused of coming into the bathroom as Cantor was preparing a wardrobe and urinating in front of her despite her telling him to get out…. Cantor also said that Sapp gifted her sex toys as Christmas gifts three-straight years and showed her nude images of women he’d slept with.

I said last week when Warren Moon got sued for sexual harassment that for some reason the #MeToo movement was slow getting to the world of sports and sportscasting. And that when it finally hits, it’s going to be a Category 5 shitstorm. Well it finally made landfall.

This was inevitable. It’s almost impossible to take a bunch of aging Alphas, gifted athletes who’ve been getting their bones honked on by coaches, scouts, agents (figuratively) and by jock-sniffing groupies (literally) since they were teenagers and put them in the actual, corporate world with HR departments and strict harassment guidelines and expect it to go well. Pro sports is a fantasy land where the culture hasn’t changed since Babe Ruth was banging hookers two and three at a time. But the working world has. And putting these guys in a normal environment is like unfreezing a caveman and putting him into Cube World. Sooner or later it’s going to go badly.

You want to say there are two sides to every story, but I can’t possibly see how Jami Cantor doesn’t have an air-tight lawsuit here. Especially given that there are texts in every one of these cases. So I can’t imagine what NFL Net’s counter-claim would be. You can deny a “good morning” titty grab as he said/she said. But dick pics, shower jerkoff videos, texts about how hard your dick is and how luscious a co-workers butt is leave an evidence trail. As does the gift of dildos. So you just can’t be doing those things anymore. And if this is any indication of what Bill Simmons’ company president and half the biggest stars on NFLN were up to, by the time #MeToo is done, there might not be anyone left covering sports in America.

Except Barstool. It’s just a damned shame these other outlets can’t conduct themselves the way we do. Sad!