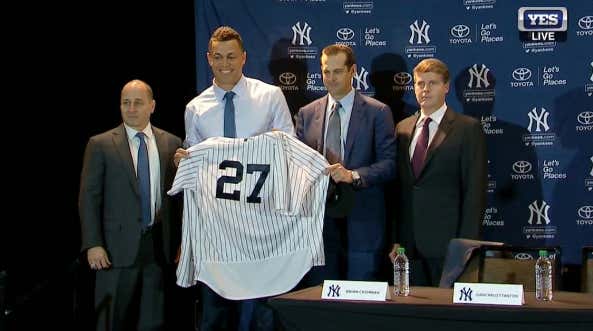 So today Giancarlo Stanton, No. 27, was introduced as the newest monster to the New York Yankees lineup. The entire time during the Q&A Stanton expressed how excited he was to play for a real organization and being thrown into a pennant race. Meaningful baseball games have not been something Stanton has been apart of in his career so this is all about to be a whole new world for him. The biggest takeaway from the presser were the various digs he took at the Marlins organization.

Here’s Stanton’s insta he posted just before the presser 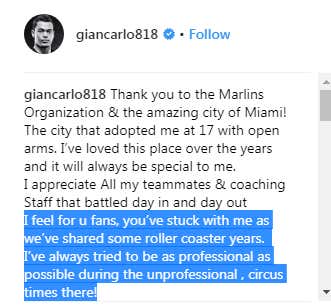 At the end of the day he’s fucking ecstatic to get the hell out of Miami and the disaster that it’s become. Stanton had enough of losing and had zero patience with the upcoming rebuild that will take years to come back from. I mean how can you blame him? The dude seems genuinely happy to be in New York, on a winning team, ready to compete for a World Series championship. He’s down to DH when need be, play any spot in the outfield, and hit wherever. He’s excited to be teammates with Judge and has already spoken with him. You’d have to think those two are about to become the best of pals and absolutely dominate New York. If you’re a Yankees fan you’re absolutely loving today, and if you’re not (hello Carrabis) you’re cringing inside.

The Empire Has Struck Back

P.S. Hal Steinbrenner is a boss