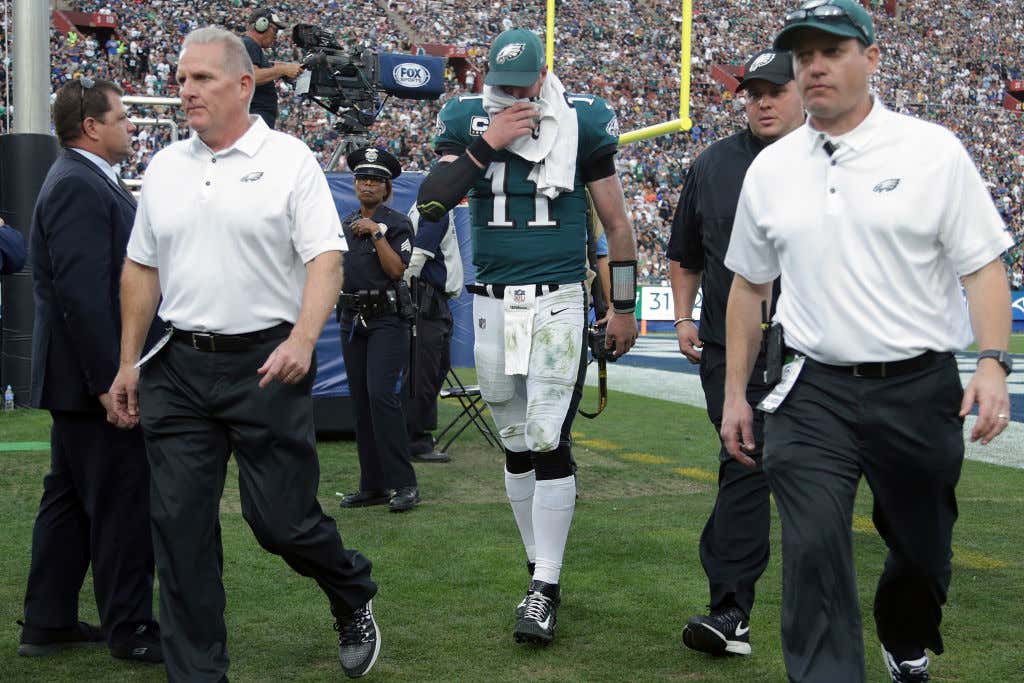 Sports, man. They’re a real fickle bitch. The Philadelphia Eagles split their West Coast road trip and come back to Philly as NFC East Champions, sitting at 11-2 and at the top of the NFL. For the first time since 2008, it looks like this team will be able to make it past the wild card game considering they’ll likely end up with a bye. And yet everybody in this city right now feels as they’ve been kicked in the dick, watched their dog get murdered and banished to Siberia. Why is that?

Well because within minutes of each other, Carson Wentz went off to the locker room against the LA Rams with a possibly torn ACL and it was announced the Joel Embiid was out for last night’s game against New Orleans with back tightness.

So again. Still managed to beat a great Rams team. Still NFC East champs. And all we came out of yesterday’s game with is the fact that sports are the worst and we’re all idiots for caring about them. Because here’s the thing. You can have the best 14 weeks of your life as a sports fan. You can have a 2nd year MVP-caliber quarterback who sets a franchise record for most TD passes in a season with 3 weeks still left to go. You can have it all one moment and it could all be gone the next because human beings haven’t evolved yet to the point where we have indestructible ligaments. You’d think all those nerds in the medical field would have been able to come up with a cure for ACL injuries at this point but here we are. The year is 2017, almost 2018, and we’re all just one bizarre bend away from 8-10 months of rehab.

Because despite the fact that sports are the worst, sports are also still the best. And I’d rather spend my entire life as a miserable Philadelphia sports fan than some noodle who can’t even name the quarterback. And you know what? Nick Foles has a massive hog. That’s a scientifically proven fact. Nick Foles has a massive hog and can definitely close the regular season out with at least 2 more wins for the Birds. Maybe Carson’s injury isn’t as bad as it seems and he’ll be ready to go 4-5 weeks from now at 80%. And if Carson isn’t able to go? Again, Nick Foles has a massive hog. And I can trust in anybody who has that going on even if I know that trust will most likely come back to bite me in the ass down the stretch. Regardless. Sports are dumb. We’re idiots for caring. But I’d rather be an idiot than a nerd and that’s the bottom line. Philly vs Everybody.