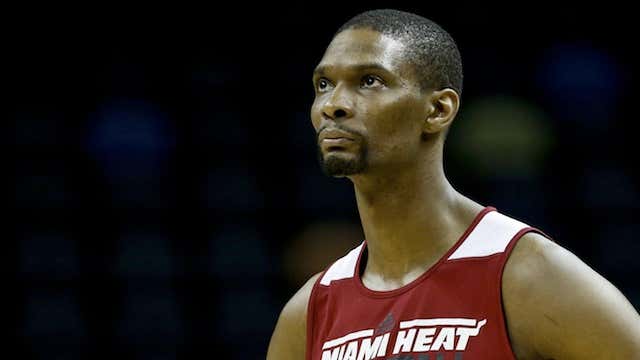 (TMZ) – The Texas home owned by NBA star Chris Bosh had all of the hallmarks of a traditional drug trafficking den … from iron gates to security cameras — this according to the cops who raided the joint.
TMZ Sports broke the story … Bosh’s mother, Freida, is listed as a suspect in an alleged crack cocaine and heroin trafficking operation based out of the home Chris owns in DeSoto, Texas.
Cops conducted an covert sting operation to obtain evidence — which included sending an undercover officer to the home on Tuesday to snatch and grab trash bags that had been left outside of the home.
Officials say investigators sifted through the trash and found tons of evidence — including baggies with cocaine residue, weed paraphernalia, burned joints and mail with Freida’s name on it.
As for the drug trafficking den — cops say the home was guarded by a large iron fence and outfitted with security cameras … “a common tactic for drug traffickers” for obvious reasons.

Chris Bosh has had a rough couple of years, effectively retiring from the NBA due to blood clots, now he has the cops rifling through a house he owns and getting caught up in salacious headlines across the internet making it seem like he’s involved with some elaborate, Sam Hurd caliber drug trafficking operation.

Everything in this story makes it out to sound like Freida Bosh lives in a well secured house that had recreational drugs used recently. “Weed paraphernalia” and “burned joints” in the trash doesn’t exactly sound like El Chapo was at the helm  of this ring. In fact, anyone even remotely familiar with the 10 Crack Commandments knows good and well that you never get high off your own supply. So the fact that anyone was using here would either indicate a terribly loosely run stash house OR it’s nothing more than place where adults go. I mean when the undercovers come back with roaches, empty baggies and then MAIL as the “tons of evidence” I’m gonna be a little skeptical that George Jung Jr. was responsible for raising Chris Bosh.

Also, how tough is it to be an undercover? Build a case for months on top of months and your big get before your story gets leaked to the media is some mail and weed that was smoked in the not too distant past. All you want to do is take that picture with stacks of cash and kilos stacked up on a table and you get a couple of electric bills and empty Backwoods packages along with the added bonus of the people you’re actually looking for now aware that their operation is hot. Brutal.