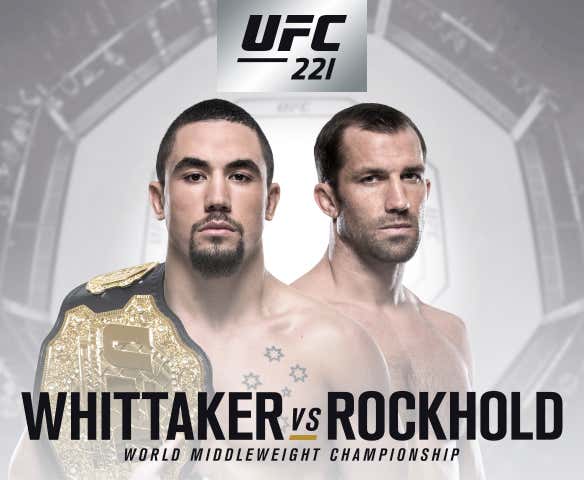 UFC- The undisputed UFC middleweight championship will be on the line in Australia on Feb. 10 (Feb. 11 local time), when Robert Whittaker defends his crown for the first time against former titleholder Luke Rockhold in the main event of UFC 221.

I wrote this blog yesterday about the possibility of Georges St-Pierre not defending his UFC Middleweight Championship, and just a few hours later that possibility was confirmed as fact. My thoughts on the whole ordeal obviously haven’t changed since yesterday’s blog, so here’s what I said there…

As a big supporter of GSP’s return, and a big supporter of the actual Bisping matchup (while MANY were tearing it down, citing that he wouldn’t defend if he won), I’m not mad, I’m just disappointed. St-Pierre needs at least one defense of the title, especially because there’s an Interim Champion at middleweight (Robert Whittaker) who should’ve gotten the shot if this was his plan. It was in his contract, as well, saying that he owed the UFC one title defense if he were to be victorious on November 4th. We know the UFC contract clauses are about as thick as water, but that doesn’t mean they should be broken. I’m Conor McGregor’s biggest fan but his utilization of “money fights” is impacting the UFC more than I’d like it to. This is just another example of someone (GSP) taking a money fight for the matchup, not the gold around his waist.

Now we’ve got Robert Whittaker, the NEW UFC Middleweight Champion of the world, defending the undisputed title for the first time on home soil against former champ Luke Rockhold. I like Bobby Knuckles a lot, and fucking despise Luke Rockhold, so my allegiance has been made. Luke Rockhold is such a fucking bitch who complained and complained and complained about not getting an immediate rematch against Michael Bisping, a short notice opponent who knocked him out in the first round, and blamed everything on the UFC despite it completely being his fault for not taking Bisping seriously. He didn’t fight until over a year later, he won that, and then he talked a ton of shit on GSP and asked him to not accept the fight with Bisping. Even AFTER things played out the way they did, with St-Pierre winning and vacating, Rockhold had no right talking like he did and came off like an idiot. War Bobby Knucks.