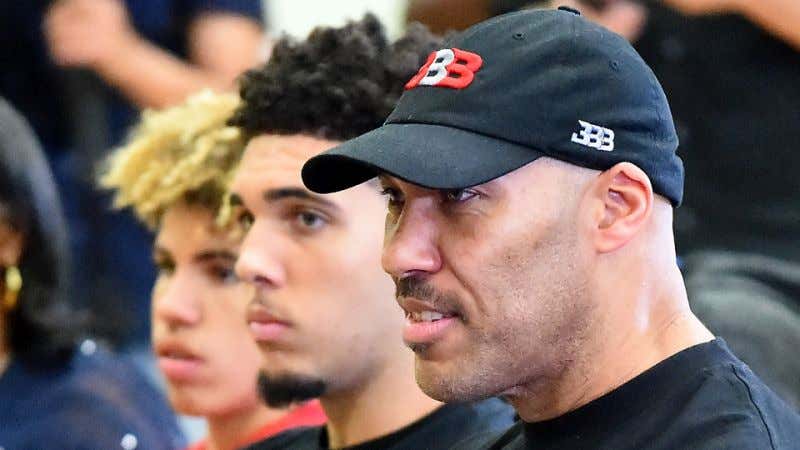 TMZ- It’s a stunning move … LiAngelo Ball will no longer be on the UCLA basketball team and in fact he will not be a student at UCLA … because his father Lavar Ball is removing him from the institution. As you know, LiAngelo was indefinitely suspended from the team after he stole sunglasses from several stores during a trip to China. LiAngelo was placed on house arrest but was sprung after Trump and others went to bat for him.

We’re told Lavar believes the suspension was unfair, especially since the charges were dropped. Lavar’s people tell TMZ the famous dad thinks “There’s no need to break down a kid’s spirit for making a mistake.” Our sources say LiAngelo is not officially withdrawn from the school but he’s at home and will not return to UCLA.

Watch out world, Big Ballers coming through! I’m sure some people will freak out that LaVar has taken one kid out of high school and another kid out of college, but that’s the thinking of small ballers. LaVar knows the BBB already got more out of LiAngelo than he could have dreamed after Gelo’s shoplifting led to the President of the United States putting LaVar’s name on his Twitter lips. We all know LiAngelo was probably going to go pro in something other than his sport like those NCAA commercials always tell us. And LaVar knew this too. But by taking LiAngelo out of school before Gelo actually saw the court will give birth to those stories about how great a player he actually was. I have heard enough about Cooper Manning’s high school days to think he was a better version of Rice, Moss and Beckham all rolled in one and that Peyton Manning wouldn’t have sniffed a scholarship if he didn’t have Cooper as a target in the backyard. By the end of Lonzo’s deal, we will hear how LiAngelo was Lonzo with a jumper but a stupid mistake as a college kid caused issues with the Chinese government that ultimately cost him his college and later pro career.

In fact if I had to guess, I would bet LiAngelo ends up going overseas to China in order to “smooth things over” with President Xi while also expanding the Big Baller Brand to the millions…(*turns on The Rock voice) AND MILLIONS of Chinese basketball fans. Then next thing you know, he is winning championships in Shanghai with Donnie’s boys Jimmer and Pony Tail. The whole crew will be drowning in beer and Fanta as every Zhang Wei, Wang Wei, and Wang Fangare rocking the BBB from head to toe. While the rest of the world is playing checkers, LaVar is playing mahjong. Ts and Ps for LiAngelo though. I couldn’t imagine being a popular athlete at UCLA and then having my dad tell me I can no longer go. That’s almost worse than being thrown in Chinese jail for 20 years. Almost.

Also what a tough break for UCLA. One minute they have Lonzo on a team with the look like a potential National Champion, the next they are down 2 Balls with a chance that LaMelo never spends a day on campus as a student.