HuffPo- When a South Carolina man got hit with a strong Waffle House craving at 3 a.m. on Thursday, he wasn’t going to let anything stop him — including an employee who he says was asleep when he got there.

Alex Bowen told WIS-TV that he walked over to the West Columbia restaurant because he couldn’t sleep. After seeing no other workers on the premises and apparently not wanting to disturb the napping person, Bowen decided to take matters into his own hands.

“Got hot on the grill with a double Texas bacon cheesesteak melt with extra pickles,” Bowen told WIS-TV. “When I was done I cleaned the grill, collected my ill-gotten sandwich and rolled on out.”

He admitted to ABC News, “I was pretty inebriated.”

Bowen added that he later returned to the restaurant to pay for the sandwich.

Hey Waffle House, get your fucking act together. You had one employee in the entire restaurant on Thursday at 3AM, and the guy was fast asleep. You’re lucky Alex Bowen was just a hungry drunk dude instead of an arsonist, murderer, thief, or guy who likes to cook his penis on a waffle iron. When you leave your doors open with no conscious employees to keep watch, you’re inviting those types of miscreants into your establishment.

And what an upstanding citizen Alex Bowen is. Dude deserves the Presidential Medal of Freedom. Not only did he cook his OWN food, he cleaned the grill and later returned to pay for the sandwich which makes no sense at all. If you go to a restaurant and nobody knows you’re there, you shouldn’t have to pay for your food. All he took were ingredients! The labor and presentation belonged to him. As such, depending on how much he liked the sandwich, the Waffle House should be tipping HIM.

Speaking of the sandwich, “got hot on the grill with a double Texas bacon cheesesteak melt with extra pickles” is cocky as hell. If I’m making a contraband sandwich as I trespass in a Waffle House, it’s a hasty PB&J as I nervously check over my shoulder. But then again, he seemed to be having the time of his life. This series of faces is priceless: 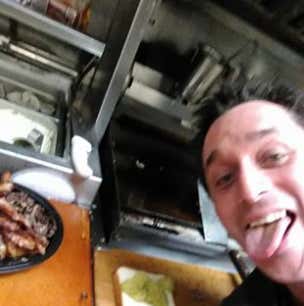 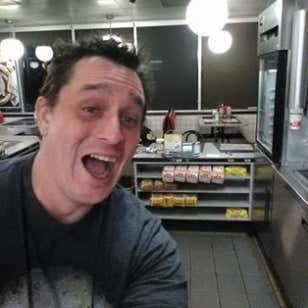 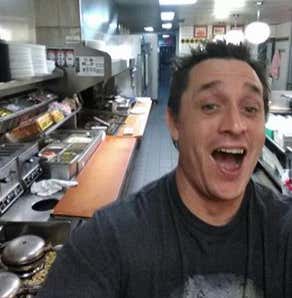