***There will be NO SPOILERS in this review***

Welcome back to Rob’s Monday Morning Movie Review! We seem to be on a bit of a roll with GOOD movies recently and I don’t see it slowing down any time soon with “The Shape Of Water” up next week, and a little sci-fi movie called Star Wars: The Last Jedi after that! I will warn you though, with that one I’m not sure I’ll be able to give an unbiased review because one of my close friends has a pretty prominent role as Jedi Master Luke Skywalker. Sorry about that. Woulda been completely objective had Mark Hamill, my great long time pal, wasn’t in it. But let’s talk about ‘The Disaster Artist’ now! 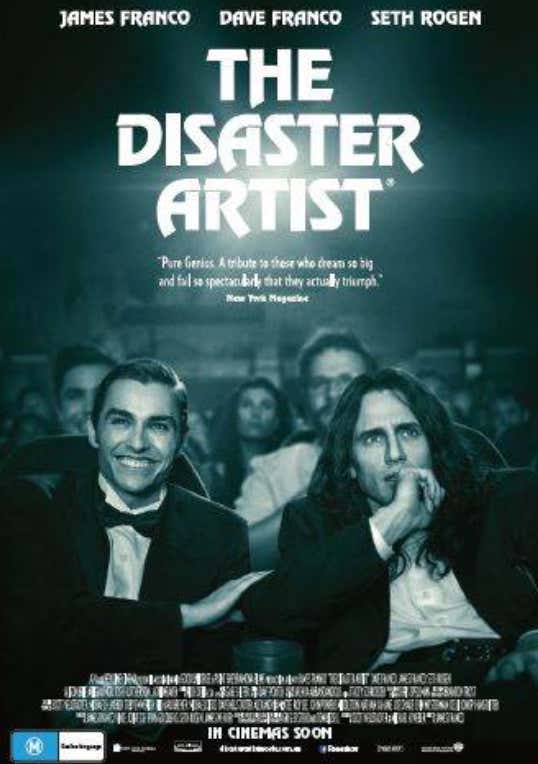 Tommy Wiseau and Greg Sestero become friends after meeting each other in an acting class in San Francisco. Hoping to achieve Hollywood stardom, Sestero moves to Los Angeles and signs on to appear in his buddy’s project. Financed with his own money, Wiseau writes, directs and stars in “The Room,” a critically maligned movie that becomes a cult classic.

I’ve been a massive fan of the movie ‘The Disaster Artist’ is about, ‘The Room’, for years now. It’s gained more and more popularity as time has gone by, and it’s one of the most popular cult classics of all time. Not for any of it’s initially intended reasons, but instead because it is quite literally the worst movie ever made. I’ve seen it described as what you would get if you vaguely explained what movies are to an alien who’s never been on Earth, then let them write, direct, and star in one of their own, and that’s extremely accurate. It’s not bad like some of the movies I write about on here, like ‘Flatliners’ or ‘The Snowman’ or ‘mother!’, it’s bad in an absolutely hysterical way that’ll make you laugh more than your favorite comedy does. Nothing in the movie makes ANY sense, many of the scenes aren’t referenced at all after they take place, there’s barely a narrative, and the acting is to the level you’d get if you asked Helen Keller to recite Shakespeare. You don’t have to see ‘The Room’ before seeing this movie by any means, but you’d probably enjoy ‘The Disaster Artist’ a bit more so I would recommend it. Watch some highlights below:

Greg Sestero wrote a tell-all book about the making of this movie a few years ago, and the legend of Tommy Wiseau grew to the point where we’ve now got an Oscar contender about him. He’s the mysterious man who made ‘The Room’, and nobody knows where he’s from, how old he is, or how he had the six million dollars to make this piece of shit film, but that’s what makes him so intriguing, and that’s what makes this movie so fantastic. 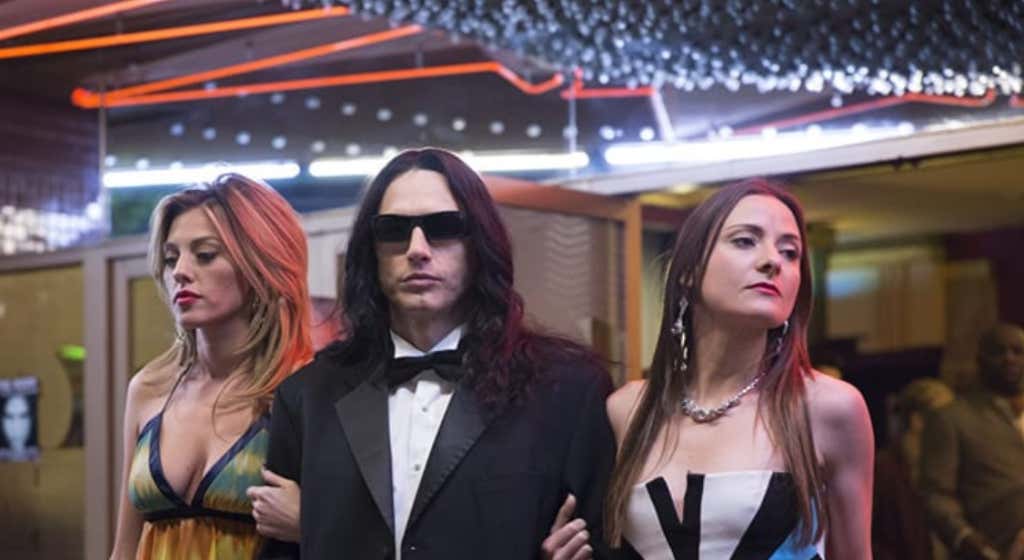 Knowing ‘The Room’ like I do, I know how Tommy speaks. It’s a bizarre accent where the inflection on almost every syllable he speaks is juuuuuust a bit outside. I’d say 40-50% of the crowd I was with yesterday were going in dry, had no idea that’s how his voice was, and laughed at all dialogue he had for like, an hour straight. If James Franco wasn’t delivering a spot on, incredible performance, I’d accuse the movie of cheating for cheap laughs through Tommy’s voice. That’s actually a theme with a lot of ‘The Disaster Artist’, because it’s too good to be true…but it’s all true. I just kept thinking to myself, “How much of this audience is calling bullshit on everything that’s happening here?”. It’s a script too good for anyone to write. Tommy’s too unique a character to dream up. The production of ‘The Room’ is too hilarious for any of these stories not to be embellished. But it’s true…all of it. It’s a truly mind blowing experience that’ll undoubtedly stick with you long after viewing ‘The Disaster Artist’. 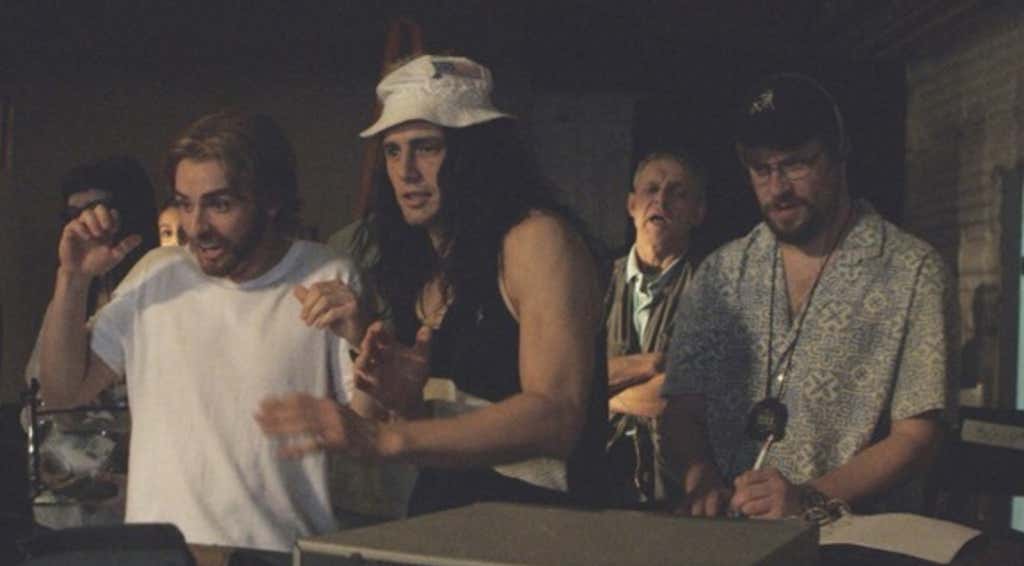 Ironically, the cast – James Franco, Dave Franco, Seth Rogan, Ari Graynor, Alison Brie, Josh Hutcherson, Paul Scheer – is largely made up of people playing bad actors while giving some of the most convincing performances you’ll see in any movie this year. I could see James Franco getting a dark horse Oscar nom for this, because while these types of movies generally don’t cater to the “Best Actor” category, he’s just too good to deny. Seeing him act opposite his brother Dave Franco is a blast as well as their chemistry is understandably off the charts. I’d love to see them become a mainstay duo in Hollywood for a long time to come. Seth Rogan is in the fighting for the funniest person in this film, which is shockingly impressive given the amount of screen-time Franco gets as Tommy to claim that title. His dry humor is better than it’s ever been, and his certain more serious scenes prove him to follow the trend of comedians who have legit chops (Adam Sandler, Will Ferrell, Jim Carrey, etc). Alison Brie is someone I’ve never thought was this amazing actress, and she definitely doesn’t BLOW YOU AWAY or anything, but she’s never been so authentic in her young career – possibly a credit to James Franco in the DIRECTOR’S chair.

I mean, I could go on and on, but if you’re not bought by now I’m not sure what to tell you. ‘The Disaster Artist’ is as good a movie you’ll see this year, and you’d be doing yourself a serious disservice not to check it out while it’s still in theaters because it’s an immersive experience that lit a crowd up like I haven’t seen in a long, long time. Ten thumbs up from ya boy. 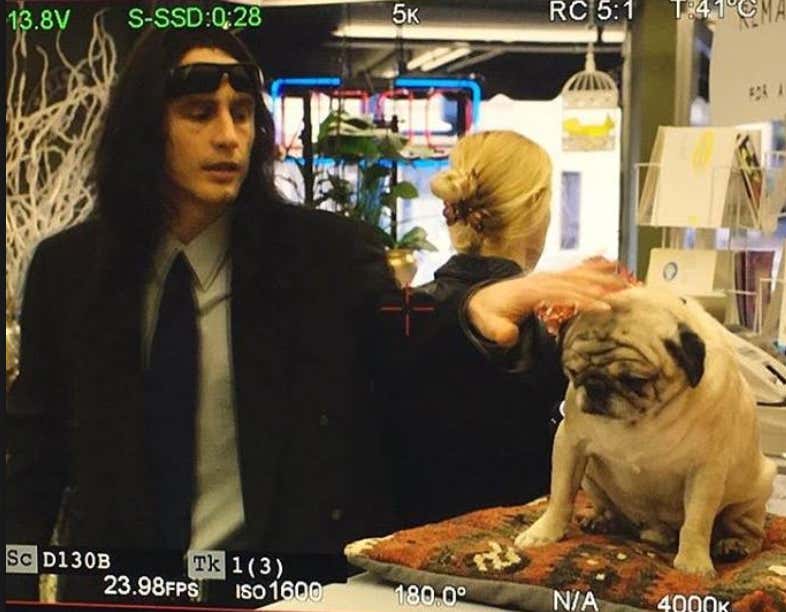