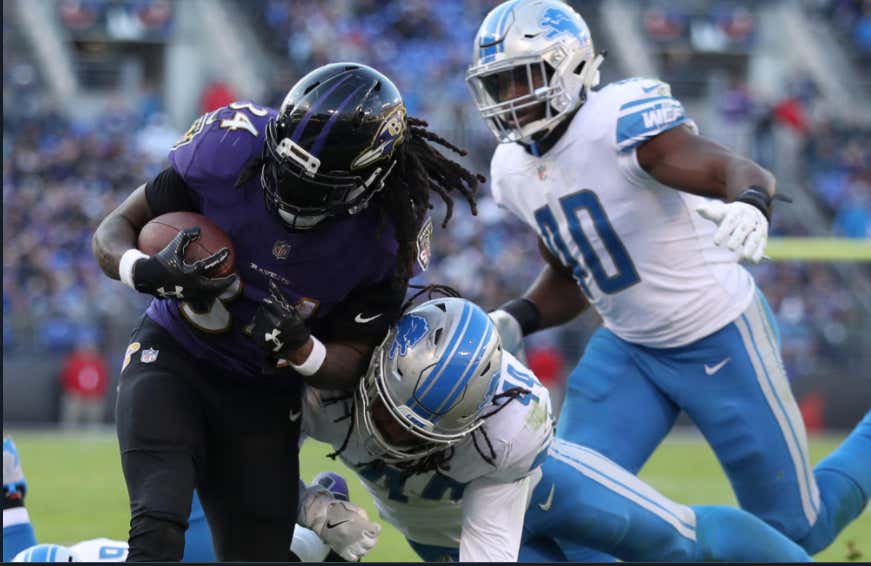 That wasn’t the game we expected it to be by any means. That’s as much life as we’ve seen from the offense all year. There may have been a few of the familiar drops and head-scratching playcalls… but other than that the offense was ROLLING. They actually looked mildly competent for once. Flacco hit Wallace on that deep ball in the 2nd quarter and that really seemed to get things going. We were running it effectively and converting 3rd downs with ease. And most importantly, we were finishing drives. Alex Collins knows when to hit a crease and head north-south for the goal line and punched two in. Even got one of the better TD celebrations we’ve seen all year

But of course we couldn’t make it easy on ourselves. Just before half, we saw a familiar sight when our most valuable defensive player went down for the count…

There is a silver lining here. Jimmy has proven to be injury-prone in the past, so Ozzie made it a point to go out and get some depth in the secondary. Hence the Marlon Humphrey pick and Brandon Carr signing. Even with Tavon Young tearing his ACL in the preseason, this is as deep a cornerback crew that we’ve had. So we should be as prepared as ever to deal with a Jimmy Smith absence on the defense.

Having said that, today was an opportunity for Humphrey to step up and show his worth, and he struggled mightily. The Lions were throwing all over us, particularly by targeting Humphrey’s mismatch with Marvin Jones. A 20-0 halftime lead turned into a 20-13 lead in the blink of an eye. If it wasn’t for the offense answering in a big way, the Ravens may have been on the wrong side of this game. Luckily that wasn’t the case, but that doesn’t have me any less worried for next week.

Next week we go to Pittsburgh and see what the kid is made of. He’ll have his hands full with that WR corps. I don’t like our chances out there, but we’ve stolen games in Pittsburgh before. I expect the Steelers to take care of business in Cincy tomorrow night, but if they don’t… we’ll have a chance to cut the division lead to 1 game. With an easy 3-game slate to finish and the Steelers still having the Pats on the schedule… ya just never know. We’ll see if the Bengals can steal one.

Either way… very encouraging win this week. If the offense can play anywhere near the way they did today, perhaps the 2017 Ravens can do some damage after all. On to Pittsburgh.