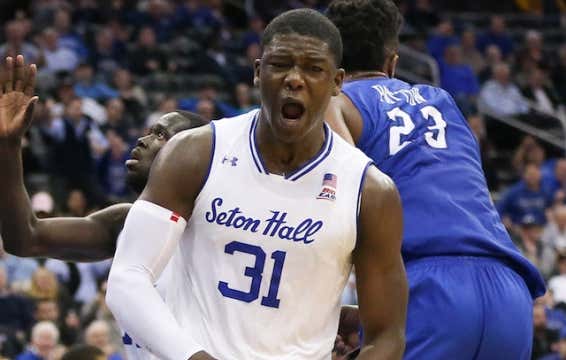 This game was supposed to be Kevin Willard going up against his mentor Rick Pitino, but, you know, that whole strippers + FBI thing ruined that. What we do have though is still two ranked teams playing each other in what will be an intriguing game due to the style of play.

Both teams do want to push the tempo as Louisville’s average length of possession is 14.5 seconds while Seton Hall’s is 16.5 seconds. How they get there though is completely different ways. Louisville wants to force turnovers and go get a quick shot. If they can’t get a turnover, they look to attack off the bounce and get to the rim. Seton Hall wants to play through Angel Delgado in the post and then let the guards of Carrington/Rodriguez/Powell attack from there.

Seton Hall is more efficiently offensively though. Both teams average about 83 possessions per game but Seton Hall averages 1 point per possession compared to the .9 that Louisville averages. The key to this game is going to be Seton Hall taking care of the ball and hitting shots. I know it’s not rocket science, but that’s how you beat Louisville. Purdue was able to come back against Louisville earlier this week by hitting shots.

One place that Seton Hall can take advantage of Louisville’s defense is on pick and roll with the ball handler. Seton Hall runs that set about 15% of the time while scoring .89 points per possession (81st in the country). Louisville struggles defending this giving up .88 points per possession (277th in the country). Seton Hall likes to get the ball to the wing and have Delgado/Sonogo set the screen there. Usually this is for Rodriguez who can attack off the bounce and either finish with a pull up or at the rim.

You can take advantage of Louisville defensively in this set because of their scheme. First, they’ll overplay on the wings and typically gamble for a steal on the pass. If that happens that immediately puts the defender a step behind. From there the screen can be used as more of a rub than anything else, pinning the defender back and letting you attack 5v4. The other place you can catch them here – which Purdue did a few times – is bringing up the big to set the screen at the top of the key. Mahmoud likes to stay more in the paint, so he’s typically a step below. Purdue would bring Haas up here, set the screen and let one of the four guards shoot off the bounce due to Mahmoud being stuck in the lane.

Louisville needs to attack offensively through Deng Adel. He’ll have a mismatch with Seton Hall having to throw Sonogo or Rodriguez on him. If Seton Hall can take care of the ball and force Louisville into a half court game, Adel needs to be able to attack the paint off the bounce. From there he can finish at the rim or needs to kick. If Seton Hall sags in the paint, which they should, guys like Snider/King need to hit open shots.

Pick: I like Seton Hall to cover here, even on the road. I’ve been high on Seton Hall heading into the year and have been impressed with their shooting to start the year – one of the big question marks about this team. Willard is familiar with the Louisville system and I trust Seton Hall to take care of the ball here. If that happens, don’t be surprised to see Seton Hall win outright.