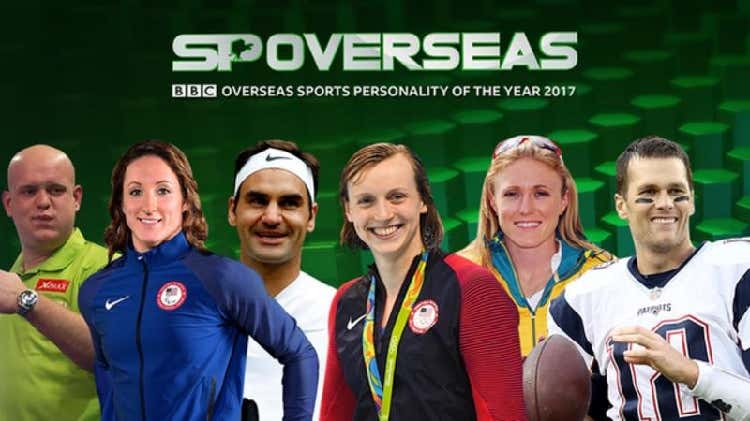 BBC – Voting has opened for the BBC Overseas Sports Personality of the Year 2017.

The award recognises the overseas athlete who has made the most substantial contribution to sport this year. …

Brady was named Super Bowl Most Valuable Player for a fourth time after his team overhauled a record 25-point deficit to claim victory at Houston’s NRG Stadium.

After struggling in the first half, Brady finished with a record 466 passing yards and became the first quarterback to win five Super Bowl rings.

In a record seventh appearance in the game, he beat his own Super Bowl record with 43 pass completions.

I have to say, this is quite an honor for Brady, especially since he’s the first NFL player ever nominated for this prestigious award. And I guess he’s up against some stiff competition. I mean, I know who Roger Federer is, so I assume he’s good. Ledecky’s name was mentioned on the Rio Olympics a lot while I was watching the interesting sports like archery and ping pong. A para-athlete is always tough to go up against, obviously. And I’m not sure what “athletics” are, but even though the only thing worse than track is field, the world still watches that garbage, so who knows?

But here’s the guy I’m most worried about:

The world number one won 7-3 at the Alexandra Palace in a match that contained 42 180s, a record for a single darts match.

He also broke a record getting there – posting the highest average in world championship history, 114.05, in his semi-final victory over Raymond van Barneveld.

Van Gerwen won a third successive Masters and Grand Slam of Darts, a fourth straight European Championship, retained his Premier League title and became only the second player to hit two nine-dart finishes in one match – in a UK Open qualifier.

Goddamn, that’s going to be tough to beat. You can set records for the most wins ever by a quarterback, lead your team down from 25 points with 17 minutes in the game, complete the second most passes in a game in history and win a fifth Super Bowl. But even I’m not going to compare that to 420 180s, a 114.05 average, two nine-dart finishes and taking the crown away from Gary Anderson.

So sorry, Tom Brady. Not your award. Carson Wentz will win the MVP. Michael van Gerwen will win the BBC Overseas SPOTY. And you’ll just have to satisfy yourself with a fifth Super Bowl MVP. And hopefully next year they won’t nominate the champion at some other pub sport like Foosball or Pop-a-Shot so you can get ‘em in 2018.