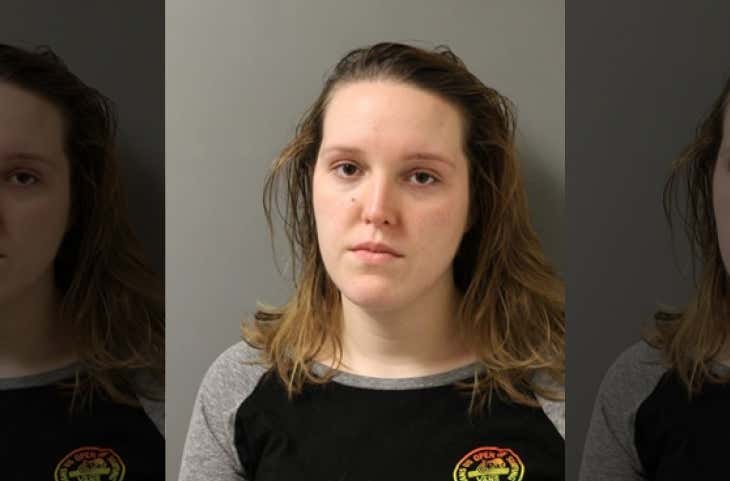 Texas – A Cypress-Fairbanks Independent School District world history teacher is accused of having a sexual relationship with a male student.

Michelle Schiffer, 23, of Houston, is charged with improper relationship between educator and student, and sexual assault of a child.

Court records allege the improper relationship happened in July. An anonymous student … told Principal Cheryl Henry that the victim, now 16, was a former student of Schiffer’s and that he admitted to having a sexual relationship with the teacher. …

Authorities quoted in court records allege Schiffer admitted to meeting the student at a Chick-fil-A restaurant and then said they had sex at a friend’s apartment in the 7200 block of Barker Cypress.

Schiffer also admitted that she’d had sexual contact with the student and smoked marijuana with him in her vehicle.

Geez, Texas. This is some weak sauce, isn’t it? The great Sex Scandal Teacher state is getting their JJ Watt jerseys in a bunch over this? A 23 year old teacher meeting a 15 year old student at the Chick-fil-A and taking him back to a friend’s place for a little apartment sex? Not to mention she’s about a Texas teacher 5? If anything, their story sounds like Lone Star John Mellencamp oldie. Sucking on a chili dog outside the Tastee Freeze/ Michelle sitting on her former student’s lap, got her hands between her knees.

Normally you can’t get Texans to even call the school unless the teacher is over 40 and looks like a retired Cowboys cheerleader and there are three or four students involved. My only explanation is that it’s the pot smoking. I’m guessing they don’t take much to that hipster bullshit down in Cypress-Fairbanks, and that’s why this anonymous student ratted Michelle out. The next teacher down there who risks her career for some 15-year-old D might consider sticking to shots of Fireball.

The Grades:
Looks: The girl drinking out of a red Solo cup and talking to her friends in the background of the house party scene in every teen sex comedy.
Grade: C-

Moral Compass/Bad Judgment: You have to respect the fact that she already trashed her career before her friends even got to take her to “Thunder From Down Under” for her 24th birthday. We’ve got an admission. Apartment sex and car sex. But this still isn’t good enough to win this recent college grad SSTROTY.
Grade: C+

Intangibles: The Chick-fil-A thing just gets me for some reason. Nothing sets the mood for taking a flamethrower to your future in teaching like fueling up with a Spicy Deluxe and some Waffle Fries. Plus eating there pisses off all them northern libs.
Grade: B-