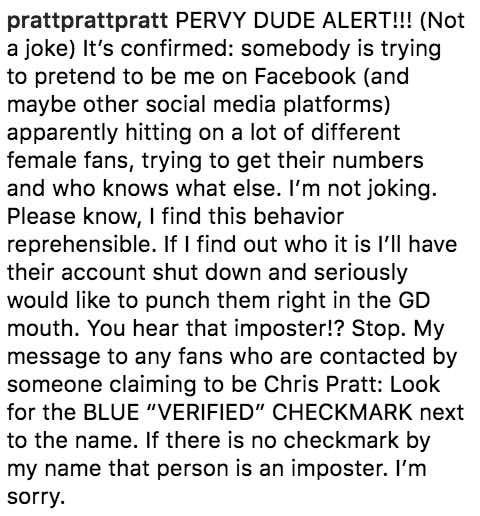 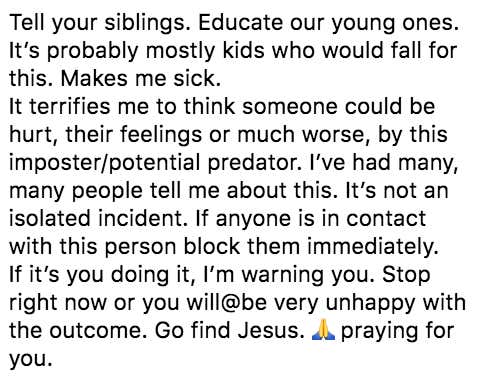 An emotional Pratt, 38, requested fans spread the word about the fake account to prevent kids from falling for the trick that makes him feel “sick.”

Oh man, some sick, twisted individual created a Chris Pratt imposter account on Facebook and he’s using it to message chicks?! As Churchill said, the world has sunk “into the abyss of a new Dark Age made more sinister, and perhaps more protracted, by the lights of perverted science.” What are we to do?! How could anyone be so inhumane, so mendacious, so deranged as to impersonate a massive movie star for personal gain? It’s almost as though… as though this has happened before? Almost every single day on the internet?

Not for nothing, that’s a great way to get out of trouble for sending creepy messages to chicks. Send out like 50 DMs to hot babes asking for nudes and the moment someone says “ew, gross!” you blast out the narrative that someone created a fake account in your name. It’s so simple. I’m not saying Chris Pratt is hitting on female fans and asking for their numbers, but if I were Chris Pratt and I got in trouble for hitting on female fans and asking for their numbers, I would do EXACTLY what he did to cover my tracks. Alert the media, and you control the story.

One time, in 6th grade, I asked this girl Abby if she wanted to go see the movie “The Wedding Planner” with me. It starred Matthew Mcconaughey and J Lo before they were serious actors, Lincoln drivers, talent judges, and ARod girlfriends. Anyway, Abby told me she was excited to see the movie, but that she would rather murder her entire family with power tools than accompany me to the film. It seemed like a crazy way to emphasize a “no” for a 6th grader, but I’m fairly sure she’s a butcher now so she followed her dreams. What did I do when she said no? I kept my cool and said, “oh, I was just kidding. Mike dared me to do it.” Boom. See you later, embarrassment! So long, humiliation! Good morning, absolution! My name was cleared, my reputation saved. All because I put the blame on someone else.

When the going gets tough, blame it on someone else. Life’s too short to be held accountable.