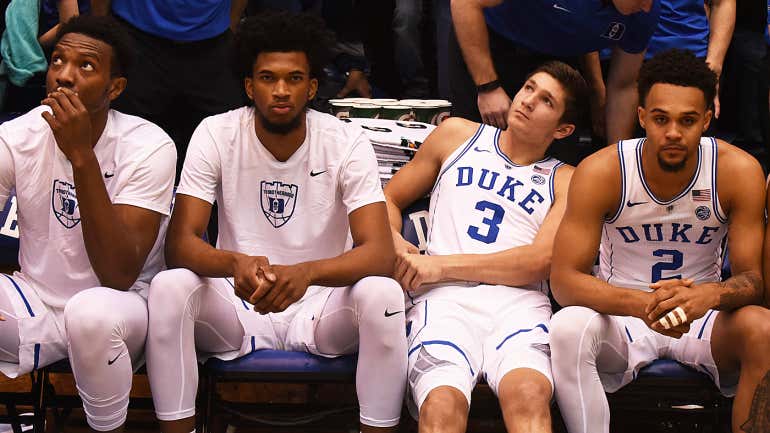 We’re about a month into the season and starting to figure out some things. First, Duke is the best team in the country at the moment. They have an incredible way to close games by getting Grayson and Bagley ISO’d on the wing and either running a pick and roll or getting Bagley ISO’d in the post. The ACC looks like the best conference in America again, the SEC has vastly improved after years of talking about it and the Big 10 is down for the second year in a row. We’ll get right into the questions as Big 10 play stats tonight and rivalry games are being played tomorrow. I’ll have a write up of the big games tomorrow morning.

Minnesota has been one of the better teams in the country to start the season. Granted they lost to Miami at home  – and that’s a game that they needed to win to truly change the public perception of the program, but they played without a starter and Miami is Final Four type good. Minnesota’s ability to defend and now go get buckets thanks to Jordan Murphy has completely changed how they play. They aren’t reliant on a guy like Nate Mason to create. They have depth with Isaiah Washington and scoring can come from a variety of places. They have the talent to be a top-12 team – which would make them a 3-seed, however I’m not sure if the Big 10 schedule will help them. They only get Michigan State once and that’s the only guarantee for a big time quality win. If they can beat Arkansas in the nonconference they’ll have wins at Providence, neutral vs Alabama and at Arkansas, but I think the Big 10 will hurt them here. Feel like they’ll drop to a 4/5 seed.

I’ll take the Kentucky 38-1 team due to the depth. Duke is killing teams right now because Bagley and Carter are monsters in the post – Bagley especially. Kentucky has the plethora of bigs to match that. You’re talking about Karl-Anthony Towns, Willie Cauley-Stein, Marcus Lee and Dakari Johnson all able to be rotated in on the Duke bigs. Then on the wings you have size to disrupt Allen/Trent’s shooting. Not to mention Kentucky would be able to shoot against Duke’s 2-3 zone with Booker/Ulis/Aaron Harrison/Lyles. It’d be a close game, but I’d go Kentucky -3.5

Kansas right now is 8th in the country shooting 45.2% from the 3-point line. They’ve finished 5th in the country the last two years shooting 40.4 and 41.3% from the 3-point line. So is the best shooting team? Probably not, but it will be in consideration. You have to assume that 45.2% will drop at some point and be more in line with the last two years. Malik Newman will likely come back to life as he’s shooting 50% now vs the 37% he shot at Mississippi State. Svi is shooting 56%, that likely won’t hold up. They’ll keep up the pace in the sense of being a top-10 shooting team in the county, especially with the addition of Sam Cunliffe, who shot 41% at Arizona State.

It’s Miami for me. I was high on Miami coming into the year and that backcourt is really special with Newton/Brown/Walker. But, what’s been making Miami so damn good is the play of Dewan Huell. The sophomore big is the leading scorer at 15 per game and is also throwing in 6 rebounds per game. Against Minnesota and Reggie Lynch – who is one of the best defenders in the country – Huell put up 23 points. Miami isn’t the shooting the ball well from behind the arc, but you have to give Lonnie Walker some time to get back to playing. Remember, he went through knee surgery and missed the preseason, so I expect him to shoot better than 25% from the 3-point line. Throw in guys like Lykes/Lawrence/Vasiljveic who give you something different when they are on the floor and this team has a good chance to be in the Final Four.

Right now it’s a two person race for Big 12 Player of the Year. It’s Trae Young and Jevon Carter with Trae Young being the heavy favorite. Other guys who will be in consideration will be DeVonte Graham, Keenan Evans and Vladmir Brodziansky. Young reminds me of Randolph Childress and his 1994-95 season. They have a similar build, putting up nearly identical stats across the board and are both deadly shooting off the bounce. TCU, it’s tough to judge what they’ve done so far. They have the talent and they are beating all the teams that they should, but the best win is against a St. Bonavanture team without Jaylen Adams. We’ll know more about them next week after they play SMU and Nevada.

The notable teams with 3 losses so far this season are Arizona, Wisconsin, Northwestern, Iowa, UCF and Vanderbilt. To me the only team here I’m not that concerned about going forward is Arizona. They’ll figure out the defensive scheme that Sean Miller wants to run and they have the talent to right the ship. What about the other teams make you feel great? Maybe UCF getting back BJ Taylor, but I’m still not sold on them as a NCAA Tournament lock team even with Taylor. Arizona will make adjustments – at least I’m assuming so-  and start playing Ayton at the 5 with Ristic as his backup. Not to mention Rawle Alkins is due back here shortly, and he’s a complete game changer especially on the defensive side of the ball.

I don’t think it’s close and the right answer is Jalen Brunson. Bridges is great at what he does. He can defend multiple positions, gives Villanova good length on the wing and can catch and shoot. He’s the prototypical 3-and-D guy you hear about during Draft night. That said, Jalen Brunson does it all. His driving ability draws defenses into the lane. He’s the closer of this team. When they need a bucket, Brunson is the one going to get it. Defensively he can guard most guards in the country and he’s an incredibly smart player. Villanova isn’t the team that they are without him at the point guard spot.

There are three locks for me right off the bat here. I’m going Jalen Brunson at point, Marvin Bagley in the post and Miles Bridges at the four spot. Right away I have scoring and rebounding covered plus a point guard I can trust that has played around dominant scorers in his career. So the next question is what do I want from my two wings. Ideally both will be shooters give me 3 guys who can really shoot and then all 5 guys having the ability to step out. I also want wings who can play multiple positions and can switch on screens with Bridges. I’ll take Trevon Bluiett and Grayson Allen. Allen gives me another ball handler while Bluiett can play both the three and stretch four spots.