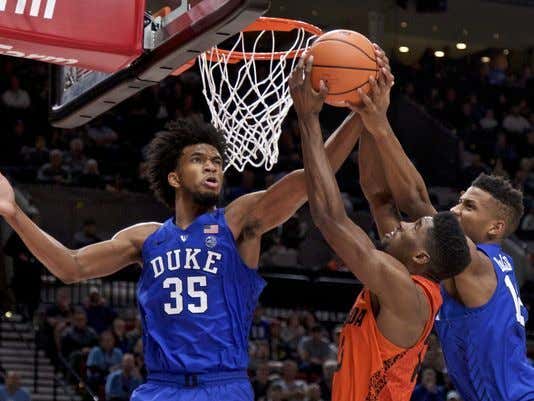 It’s safe to say the PK80 was a huge success. The tournament played out nearly as expected and had the four teams everyone wanted to see in the finals. You had Michigan State vs UNC on one side and Duke vs Florida on the other. Just a couple of weeks after the Champions Classic, we had another setup for two great games in a back to back setting. Also just like the Champions Classic we saw one game absolutely stink and the other be wildly entertaining. Seriously, the first half of the Florida/Duke game should be showed on how this game should be played. There were minimal fouls and stoppages. The refs let the players get up and down the court. There was a great flow to the game. Shit, both teams outscored both UNC and UCF in one half as those two teams had 45 and 43 points for the game.

Just like the Champions Classic we saw Duke show why they are the best team in the country right now. Duke didn’t necessarily play well all tournament. They had to come from behind against Portland State and then really comeback against Texas before getting to the finals against Florida – one of the most entertaining teams in the country. Florida came out blitzing Duke from the start, playing its 4-out offense and just eyeing Duke up off the bounce for open shots. Once Duke settled in we saw the development of two different players and the main reason why Duke is the No. 1 team in the country.

First was Grayson Allen. He had the unpleasant time of being guarded by Chris Chiozza – one of the best guard defenders in the country. He was able to finish with 14 points for the game, but it was his ability to change the game via his playmaking that stood out. He didn’t force the issue. He took 12 shots, 8 of which were threes, but the number that stood out were the 7 assists. He looked to attack off the bounce and once he got a foot inside the lane he was looking for the open man. One of the plays that changed the game was in the second half, he drove into the lane got about a foot and a half in and whipped a quick pass to the corner for a Trevon Duval three. It’s the development of Allen as playing in the system and adjusting to each game that is really impressive.

Second was the story of the night. Marvin Bagley, who is solidifying himself as arguably the most dominant player in the game right now. He finished with 30 points and 15 rebounds, 6 of which came on the offensive side of the ball. More importantly he went 9-for-10 from the free throw line. Simply put Duke doesn’t win this game nor are they the No. 1 team in the country without Bagley. It’s also pretty insane to think this guy would be playing against high school kids right now if he didn’t reclassify. I had him as the best NBA prospect heading into the year and I think you’ll see him separate some from Ayton/Bamba and Porter depending on his health. Bagley is currently grading out as excellent on the offensive side of the ball per Synergy.

What made Bagley so special last night – and really throughout the PK80 – was his feel for the game. He’s a dominant lefty and even then people couldn’t stop him from getting to the lane. His athleticism is absolutely off the charts and he has insane footwork for a guy his age and his size. K is using Bagley similar to Jayson Tatum last year in certain ISO sets. He likes to get Bagley the ball on the elbow, he’ll clear out by bringing Duval opposite side and Grayson works up from opposite corner. From there Bagley shows a couple different moves as he likes to use crossovers, spin move and a jab step to get to the rim.

The scary thing about this all – Duke can get better. Wendell Carter didn’t play well. Trevon Duval struggled to shoot the ball still. They were in foul trouble. The 2-3 was pretty ineffective, yet they still found a way to win. That was by far the most entertaining game of the season and Florida is a really good team. They provide a different look as they run essentially four guards with a post player and just kill you with shooting. They are also insanely balanced. Hudson led the way last night with 24 and 10, Chiozza put up a stat line of 13/7/6, Koulechov had 15 and 6 while Allen had 17. That was a Final Four game last night.

That was a Final Four game that Duke won on the heels of a 15-2 run late in the game. This is where Duke showed the talent of the five guys they start every game. Duval forced a steal due to his incredibly quick hands. Trent forced two turnovers due to his size and ability to defend. Allen hit a three in which he used a near perfect shot fake to cut the lead to three. Bagley was Bagley. That means he was the most dominant player on the court and showed why he’s the reason Duke is the No. 1 team in the country. None of this is possible without Bagley, who reclassified late and ultimately chose Duke over USC. The scary thing is he’s putting up near historic numbers and he’s improving each game.