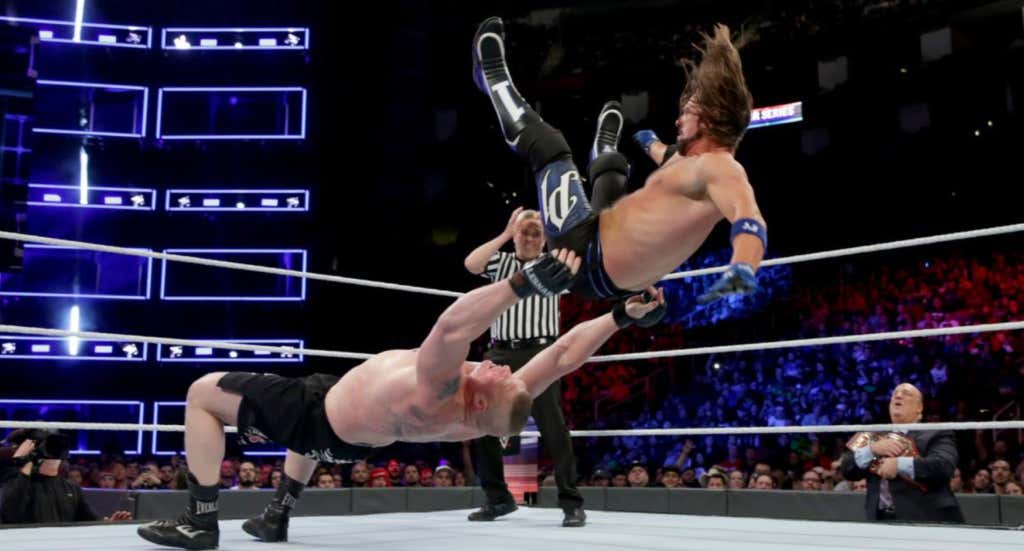 Welcome to the Survivor Series recap blog! Carrabis and I did an hour-long recap show as soon as the pay per view went off the air last night where we dive deep into each and every match, so if you’re looking for something to listen to in the cube or on your way home, check that out here.

Overall, I loved the show. It had it’s bad moments, like commentary the entire night (what the heck was Booker T on?), the elimination order of both traditional elimination matches, and the finish – which I’ll get to into in a second – but WAAAAY more good than bad.

The Shield vs The New Day delivered despite not having the aura it could have with a non-botched Hounds of Justice reunion. The Shield showed lots of strategic sequences while The New Day focused more on the tandem moves and team-ups, busting out a bunch of stuff they’ve never done before. I mentioned this on the pod, but I really hope Kofi Kingston gets a WWE Championship run before he retires. He’s been such a workhorse for so many years and it’d be so unexpected I’d adore it.

The Women’s 5 on 5 was sloppy, and with Becky Lynch being eliminated two minutes into the match I checked out, but their mission was accomplished when Asuka looked like a star in the end, so bravo! That’s not sarcastic, I really do mean it. Asuka finally looked like the monster she is.

Miz and Corbin had their match and it was perfectly fine, nothing special, but not bad. Corbin got the big run at the finish, when he defeated Miz clean with an End of Days. He then immediately undid whatever that win did for him when he botched the post-match promo and said “My hand goes up…you mouth goes, uh, CLOSED!”

The Usos once again blew us all away with their match against The Bar. They’re starting to legitimately make a case for them being the best tag team in WWE history, and I know that sounds crazy, but a lot of their face work was overlooked because it was “for kids”. I’ll urge you to go back and watch their pre-show match with Seth Rollins and Roman Reigns from Money in the Back 2013 in Philly to give you a taste of what you might’ve been missing out on if you weren’t giving them your full attention. They got the win over The Bar (as they should have) and will close out the year as the best tag team in the company. Just another for that 2017 resume.

Charlotte vs Alexa was everything I wanted it to be and more. Up to this point in the show, they told they best story with their time and got the crowd super invested by doing less than anyone else did. The true definition of less is more on full display. Alexa dominated the majority of the match, followed by a snap-comeback sequence by Charlotte who won with a Figure 8. More than anything, this laid the foundation of a great rivalry in the future.

When Brock vs AJ was announced as the CO-main event and not the final match of the night, I was fucking pissed. It was extremely apparent Brock was going over, which he shouldn’t have, but when I let the match play out, I wasn’t fucking pissed anymore. This match was absolutely amazing. Possibly Brock’s best since returning the night after WrestleMania 27. AJ Styles seems to be on a mission to retrieve his spot as the best wrestler in the world because he was bumping his absolute ass off and then working Brock’s leg so brilliantly I was getting boners left and right. Couldn’t believe how great this was. The wrong man won, obviously, but AJ looked really strong in defeat and I have a feeling we haven’t seen the last of these two in the ring together. Paul Heyman had nothing but great things to say after the final bell.

The main event, sheesh. This was a mess. The first ten minutes were full of staredowns and small exchanges followed by tags, and that was cool, but after that everything went off the rails. Shinsuke Nakamura was the first one eliminated, followed by Bobby Roode, leaving SmackDown with only established stars and no new ones. Then on the RAW side, Samoa Joe and Finn Bálor were both eliminated…..sooooo….same deal over there sans Braun. The finish came down to Shane McMahon being the sole survivor on SmackDown and having to take on Triple H, Kurt Angle, and Braun, but Triple H double-crossed Kurt and pedigreed him. He stared down with Braun and teased siding with Shane, but then he just pedigreed Shane and the match was over. It was so awkward and nobody understood what they were going for, so the crowd didn’t react in the slightest. Braun attacked Hunter after the match, hopefully setting up a marquee match between them, and he stumbled around hilariously when the show went off the air.

Again, listen to today’s From The Top Rope to hear myself and Jared Carrabis go way more in depth on all of the points I’ve made here, and if you enjoy the show please spread the word!