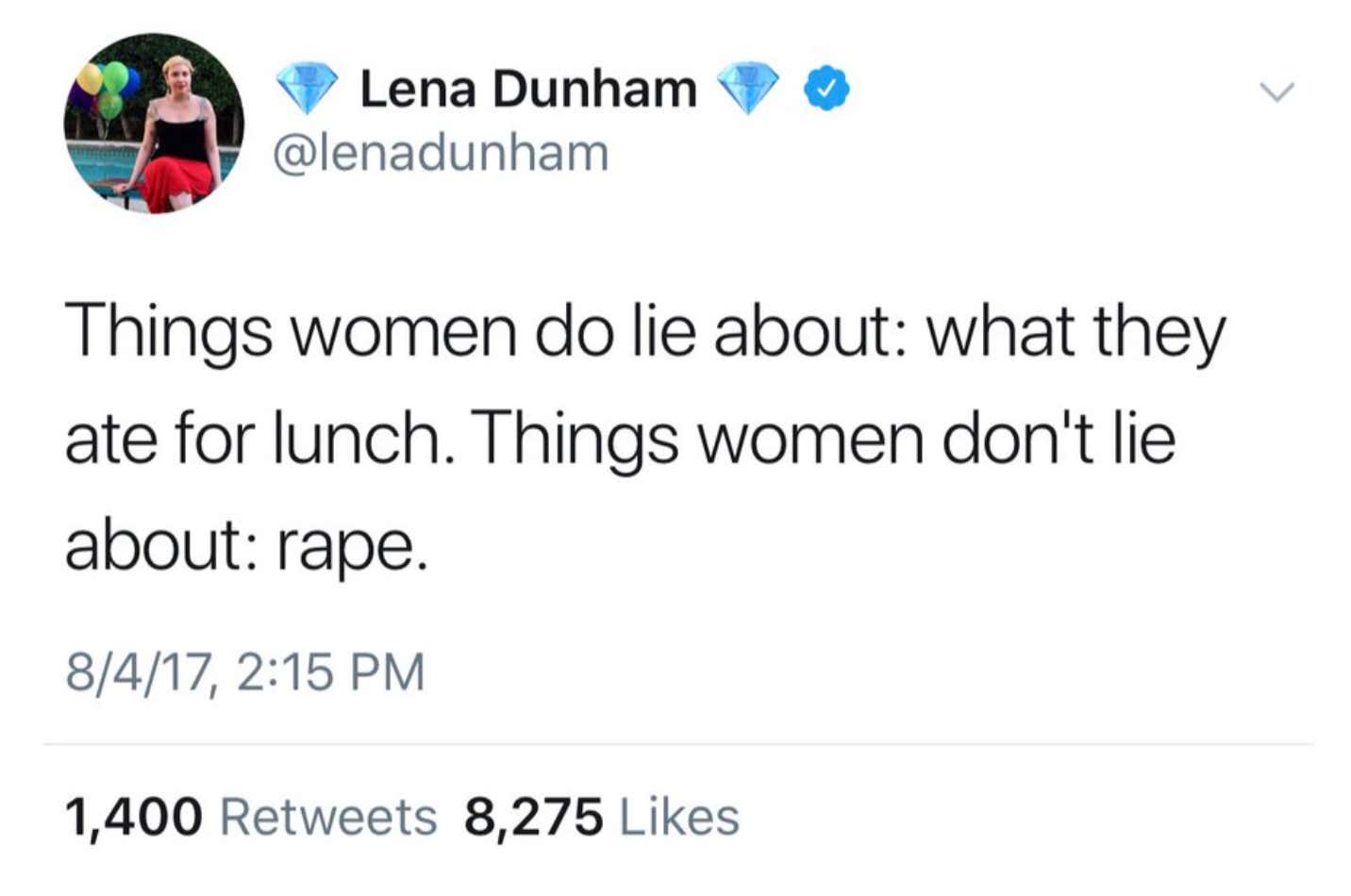 1) Defending a producer of Girls who is being accused of sexual assault, automatically assuming the allegations are false and utilizing some fake ass made up statistic, simply because the man accused is her friend:

2) Backtracking with a lame ass apology, like she always does:

3) Being accused of being a racist by a writer on her new show:

Quite the weekend for your girl! In a long, long, LONG list of Lena Dunham issuing completely unnecessary and full blown asshole statements about various topics in society, this one takes the cake. This one is loaded with a STAGGERING amount of hypocrisy and tone deaf disrespect. Lena Dunham – the CHAMPION of feminists and women everywhere…the DEFENDER of all victims and casualties from male chauvinism – has decided that the latest accusation of Hollywood sexual assault HAS to be one of the very rare instances of false allegations. The person in question is her buddy? Well no WAY it can be true then. Remember that profoundly blunt and firm “things women don’t lie about: rape” statement? Well that doesnt count anymore because I like the person being accused.

What an absolute fucking JOKE! I had to fact check this and make sure I was reading it right because it was so insanely hypocritical I thought it had to be fake or incorrect. Like there’s no way that the girl who has been this vocal and forceful in the fight against men she deems to be misogynistic would every immediately jump to the conclusion that her friend is innocent. That surely had to be impossible. Nope! Wrong! Lena Dunham out here completely contradicting everything she said about her most important and passionate belief. Thats astounding, man. Astounding.

Obviously false allegations are a real thing. And a very real problem that cant be ignored. But for Lena Dunham to take her 5 MILLION followers and interject herself into this case – potentially swaying public opinion and clouding the facts of a potentially serious and traumatic situation and even further complicating things for the young girl who reported – it is simply unbefuckinglievable. After years and years and years of blindly defending any and every female in any sort of dispute against any male, the INSTANT it affects one of her friends she flip flops and uses her platform to minimize that girl’s account and put down her feelings. Now, of course like I said, false accusations are real, and this may very well turn out to be one of them. Who knows. But for Lena Dunham to not realize that her entire existence and her entire brand that she exploits to make money is built on the exact polar OPPOSITE of this statement is so dumb I think she genuinely needs to be in the running for stupidest person in Hollywood.

She’s just like every other celebrity that lives in her completely fake life bubble of fame and fortune who can no longer understand how the rest of the normal population think or operate. She’s not alone – there’s a zillion celebrities just like her. Now that the presidential candidate they didn’t like was elected and there’s bad things going on in the world that they don’t like, they take exception and are completely baffled how the rest of the world doesnt agree with them and want things to be just like they want. So spoiled and entitled that when something doesnt break their way, well then the world must be incorrect and this injustice must stop! So used to having their cake and eating it too that when something becomes personal and hits home for them, well then something must be wrong! We need to undo this so that I can have everything exactly how I want it! For example – women don’t lie about being raped except if it affects my friends negatively in which case I MUST make a public statement saying its fake news so that the order inside my bubble is restored.

And so now Lena is doing her usual routine with her bullshit apologies where she has the IMPOSSIBLE task of making her absurd comments somehow seem rational. Like the time she said she wishes she had an abortion. Or the time she accused Odell Beckham of treating her like a dog simply because he didn’t speak to her enough at an event. Or the time she ruined a man’s reputation with her fake rape story in her memoir. The woman is a walking apology:

At what point are people going to fucking realize that EVERYTHING this woman says is completely sensationalized and wildly off base because her brain has flat out been poisoned by a life of fame, money, and a position as some sort of self-appointed queen of the victims? She flat out creates controversy by being brainwashed into thinking that everyone and anyone is out to get her, out to get females, out to get LGBTQ people, etc etc. Unless, of course, as we found out this weekend, it is a problem for her friends in which case “Nah, you’re lying.”

As for that racist shit – to be fair that woman’s statement doesnt really have anything specific about Lena Dunham being a racist other than her running in circles with other white entitled privileged hipster chicks which is undoubtedly true. But man oh man do I wish there was some tangible evidence that just flips Lena Dunham’s whole life upside down. Her brain will fucking EXPLODE if she comes to realize she’s just like every other spoiled entitled white person. Once Lena realizes that not even her own crew of liberal crusaders likes her anymore, she’s going to just implode. Like one of those oversized marshmallows that you’re roasting over a campfire that gets too melted and just flattens out like a blob of gooey glop.