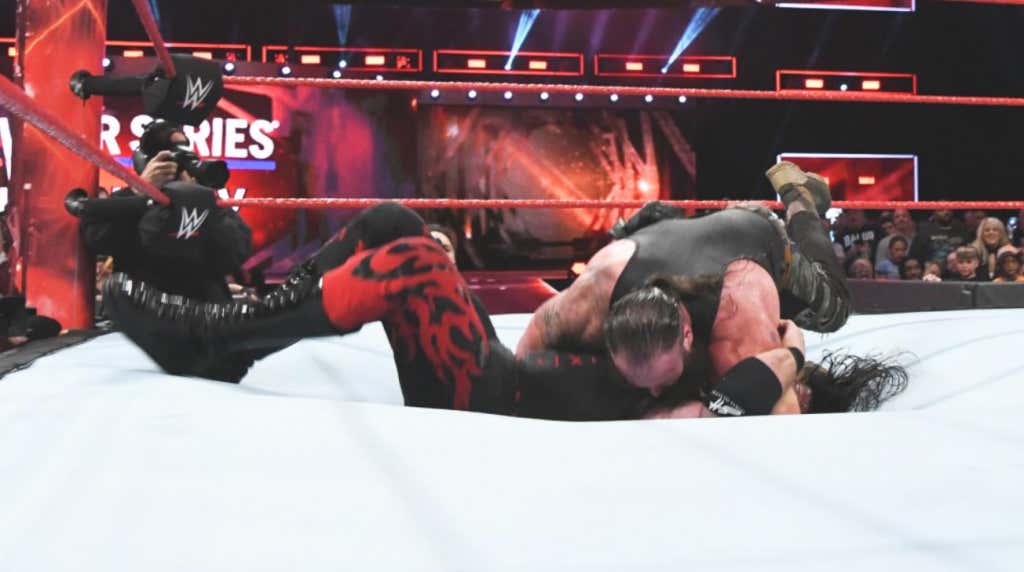 Welcome back to the weekly RAW recap! Last night was the red team’s go-home show to Survivor Series, and it really did it’s job in making me more excited for the pay per view. I thought the show was good all around and I’m ready to talk about it.

Kurt Angle showed his extreme bias towards his son, Jason Jorgle, by giving him a spot on the Survivor Series team, and that was the straw that broke Stephanie McMahon’s back. She was gonna fire dat bald head ass. BUT, right before she could, The Shield intervened. Kurt joined The Shield for TLC, so they’re boys now, and Roman is now back from the mumps so they’re extra intimidating. The requested to face The New Day at Survivor Series, and the match was made.

Bayley beat Mickie James and Dana Brooke to become the fifth and final member of Team RAW at Survivor Series. This was a pretty fun match with a melee at the end that involved Asuka, and the finish was really sweet and saw a Bayley-to-Belly out of nowhere. The match will now be Alicia Fox, Sasha Banks, Nia Jax, Asuka, and Bayley representing RAW going up against SmackDown’s Becky Lynch, Tamina Snuka, Charlotte Flair, Carmella, and Naomi.

This match was so much fun and makes me want to see a lot more of Kalisto and Akira Tozawa as a team. Look at this shit!

Love it. Enzo and Kalisto will face each other at Survivor Series on the Kickoff for the Cruiserweight Championship.

Jason Jorgle beat Bray Wyatt miraculously by rollup after getting his ass kicked, and after the match, he got his ass kicked some more. The crowd chanted “Thank you Wyatt” after he kayfabe injured Jorgle, just one step removed from “DIE ROCKY DIE!”

Paul Heyman cut the exact same Paul Heyman promo he’s been cutting for a few years now, which isn’t bad, it’s just repetitive, but when it’s AJ Styles he’s hyping up – I’ve got no complaints. I hope Brock doesn’t do what he did with Dean Ambrose at WrestleMania 32 and just veto doing anything because of the size difference, because this could be fucking GREAT!

There was also a marriage proposal in the middle of this promo that Heyman kinda shit on, but I’ll give that it’s own blog later.

Finally! The Shield’s reunion match…in a…..forgettable RAW match in the middle of the show. Oh. Okay. Highlight was this dude trying to walk down the aisle with The Shield and getting BODIED!

Seeing the Triple Powerbomb (not the Shieldbomb, that’s horrible) is also kinda sick and I’ll fully acknowledge that it’s member-berries at work.

This fired me up because Jason Jordan is the worst character I’ve maybe ever seen, and now the Survivor Series match is even older and even more random.

Braun Strowman is the youngest person in the match at 34.

Finn Bálor and Samoa Joe had to team up to face The Club to get on the same page, and holy shit do they have chemistry as a tag. They were absolutely awesome, and I don’t wanna hear that they have nothing for either of these guys from here on out, because if they don’t, team them up! It clearly works!

As a guy who’s constructed many a wrestling ring, I always wonder how they remove the boards like they do. Gotta be some kind of trap door boards, I suppose? I’m not sure, but Braun is a great person to pull em out for, and if this is the end of Mayor Glenn back on the main roster, what a waste. Putting him over Finn Balor and Seth Rollins, ugh. It disgusts me. Get outta here Glenn, go focus on your campaign.

That wraps up RAW, I’ll see you guys tomorrow for the weekly SmackDown recap (unless you read my other blogs)!