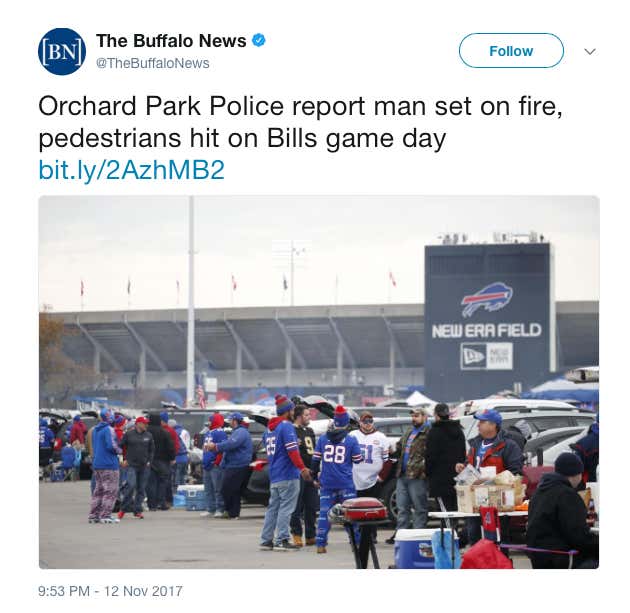 This is when you know reality has blended so much with the internet stereotype people have for your fanbase that nothing really makes sense or matters anymore. I read this headline and didn’t even flinch. Oh a Bills fan was set on fire, yeah so? The only story is if we don’t get video of it. Then it becomes a story. Bills Mafia doesn’t fuck around. Win lose or draw someone is getting hurt, someone is getting lit on fire, and everyone is getting drunk. You don’t have to like it, but you sure as fuck need to respect it.

Now, the real point of this blog. I want to express my condolences to Bills Mafia. I’ve been an honorary member since Week 15 2014, the Sunday that the Bills beat the fuck out of Aaron Rodgers (aka the best game of a miserable Bears season). And in that time I’ve come to understand Buffalo and what the Bills mean to the fanbase. How every year something like this happens, this year it may have lasted a little longer, but every year there is hope and then that hope is crushed in a gross and terrible fashion. That was yesterday. The Saints came in and did whatever they wanted to the Bills right in front of Bills Mafia. I’m sad for you Bills fans. You’re good people, you don’t deserve this, you really don’t. We were even planning a trip to Buffalo this December to do a full Bills Mafia experience but now I’m not so sure. Once the hope is gone it’s gone. So my condolences.