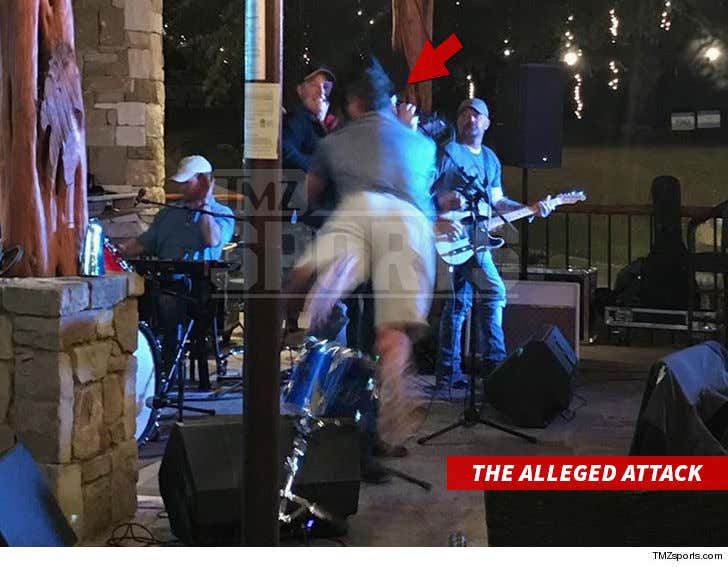 KFC said it perfectly — this is pretty much what we all expected Josh Beckett to be up to these days. Classic Beckett rushing the stage and tackling country singers after he’s 20 beers deep because they played a Danielle Peck song. Vintage Beckett move.

Ex-MLB star Josh Beckett was arrested after allegedly going full NFL linebacker on a country band … completely laying out the singer and causing injuries, TMZ Sports has learned. We’re told the 37-year-old — who won World Series MVP with the Marlins in 2003 — was at an open mic night at a country club in Texas with some friends when he jumped on to the stage mid-performance and tackled the singer.

Cops were called to the scene and Beckett was arrested for public intoxication — the officer said he determined Beckett was “a danger to himself and others.” According to the police report, obtained by TMZ Sports, Beckett admitted to stage diving and said he hit his leg on the speaker during the incident.

The worst part … the singer of the band told cops he suffered serious injuries to his arm, neck and shoulder from the incident … including a torn rotator cuff and dislocated shoulder. Cops say the incident is still under investigation. Beckett’s lawyer tells TMZ Josh claims it was an act of horseplay and he didn’t mean to hurt him. He’s apologized since the incident, and is trying to do what he can to make amends.

So, we might have a scoop on this story. But before we get to that, I just want to react to it on the surface without being provided that information. Josh Beckett is an asshole. I can completely understand why his friends like him — he’s a loyal guy and I’m fully aware of all the charity work that he’s done. But at the core of who he is, he is an asshole, and I say that from first-hand experience. Don’t need to revisit the story, but I’ve told it on the Section 10 Podcast a couple of times. He’s a dick.

Do I believe the “I tripped on a speaker while attempting to stage dive” excuse? Does anybody believe that? Bro, the stage is the other way. You don’t run at the band so hard that you break somebody in half if your goal is to stage dive. Wrong direction, dog. And who the fuck stage dives at a country show? Think of a better defense story next time and maybe people might actually believe your bullshit.

Now, these are all unconfirmed rumors at this time, but supposedly there’s a video of one of Beckett’s buddies betting him somewhere in the neighborhood of $75,000 to run on stage and tackle one of the band members. In the video, people cheer Beckett on after the bet is made, and he then proceeds to run on the stage and tackle the guy. Again, this is all allegedly, but that’ll be a real bad look for him if this rumored video sees the light of day.

We’ve all done some real stupid shit when we’ve been drunk. I think that’s something that we can all relate to. But it takes a real egotistical asshole to not just get up on the stage uninvited while somebody else is performing, but to then tackle the shit out of a complete stranger for your own amusement and the amusement of others takes it to another level. Dude sucks. And I’d still believe it was 100% intentional even if I didn’t hear about the rumored video.