Love! AKA Brother Love! In the building! Or on a beach in a fancy hat. Whichever way you want to slice it, doesn’t matter because we’re here now. He thought he told you that he don’t stop. Brother Love hadn’t changed his name since 2005 when he made the formal switch from P. Diddy to just Diddy. And when you think about it, Brother Love’s always been right on the money with these name changes. Never a force, they’ve always fit not just the place where he is at in his life, but where we as a world are at during that time.

Puff Daddy, Puff, Puffy, all meshed well with the superfluous names around him during the braggadocios, shiny suit era of the late-’90s. Then as the new millennium rolled in, it was time to modernize. P. Diddy was just the futuristic version of Puff Daddy. And no one batted an eye. Then, by the time the mid-oughts came about, he dropped the P. It was the Nextel/T-Mobile Sidekick/AIM era and everyone was abbreviating everything. It only made sense to consolidate and drop the P.

And so he lived, as Diddy, throughout the next decade plus. Throughout albums, both his own and more Biggie re-releases. Ma$e went on to become a pastor, be welcomed back, only to fade back into the abyss yet again. Shyne moved to Belize just to be left the fuck alone. Diddy released a profitable clothing line, and acted in feature films, such as the critically acclaimed hit, “Draft Day.”

Diddy had a good run. But the times, they are a-changin’, and we enter a new era of Sean Combs’ prolific career. It’s the Love Era. Also know as The Brother Love Era. Take that. Take that.

PS – You can claim to change your name but it’s not 100% official until he updates his Twitter and IG names to TheLoveMan or BrotherLove69 or something. And knowing Diddy’s past with acquiring Twitter handles, this may take some serious negotiating. 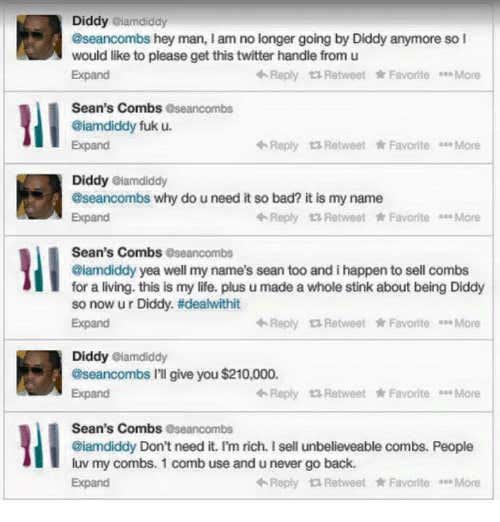