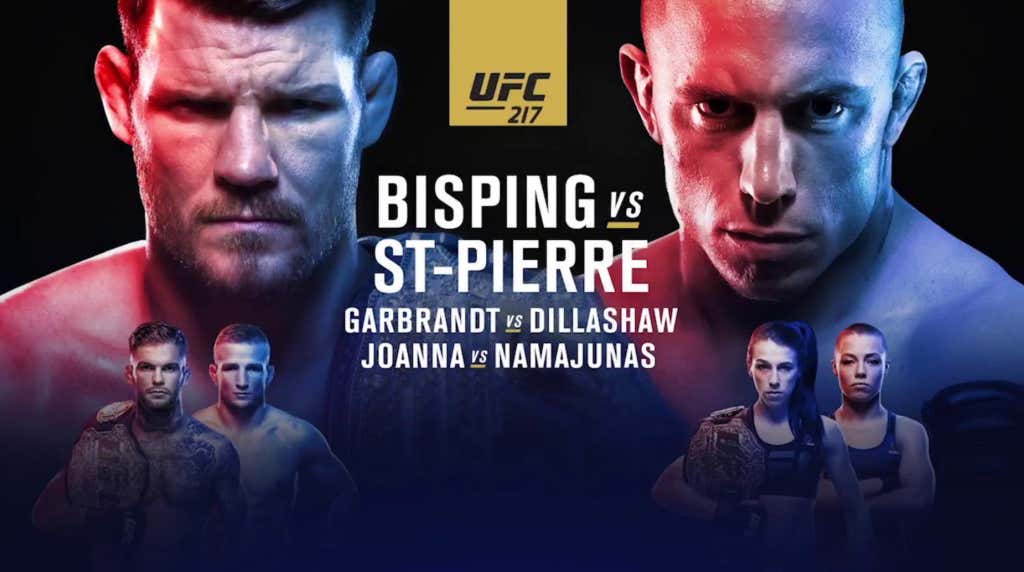 Folks, we’ve finally made it. UFC 217 is tomorrow, and all three title fights (plus the other two fights on the main card) are still in tact! Shocked face emojis, as well as a classic thanks to the MMA gods are appropriate here, so I’ll pause while you all look to the sky and say “Thanks for lettin’ us bang, bros.”

There’s a ton of intrigue in this card, and it’s the biggest one the UFC is putting on this year for a few main reasons:

-It’s at The Garden. Yuge.
-Georges St-Pierre, one of the greatest fighters of all time, is making his return to the octagon after spending almost four years away from the sport.
-Cody Garbrandt vs TJ Dillashaw is not only one of the best matchups in mixed martial arts history, it’s one of the most heated rivalries we’ve ever seen.
-Joanna Jedrzejczyk looks to break Ronda Rousey’s record for the most Women’s Championship fights ever (currently set at six).

Today, in this blog, I’m going to give you my thoughts on the fights themselves, and tomorrow, I’ll have another blog breaking down the rivalries and stories leading up to said fights. If you’re more on the casual side of fandom and this is a card that’s peeked your interest, that may be the more appealing blog to you, but I’ll keep my analysis here light enough for you to understand…because…well…I’m an idiot who’s a blogger, not an analyst. Before I get into the fights, though, I gotta mention this: everyone’s walking out and fighting in custom Reebok gear tomorrow (like they did for UFC 205), and all of it is FLLLLLLAAAAAAAMMMMMMMEEEEEESSSSSS. I was sent some of the swag, because I’m the biggest, most high profile, and most respected MMA fighter in all of the land, and I shit you not, it stopped the office dead in their tracks. People in the streets were fainting at the sight of me and I had to walk back into my office and order delivery for the protection of those in the city.

You wanna look as good as myself and all of the other fighters competing tomorrow, I’ll hook it up. Click this link, pick out what you want, and use promo code BARSTOOL for 20% off all UFC gear PLUS free expedited shipping on it. Don’t say I never did anything for ya. Onto the fights! 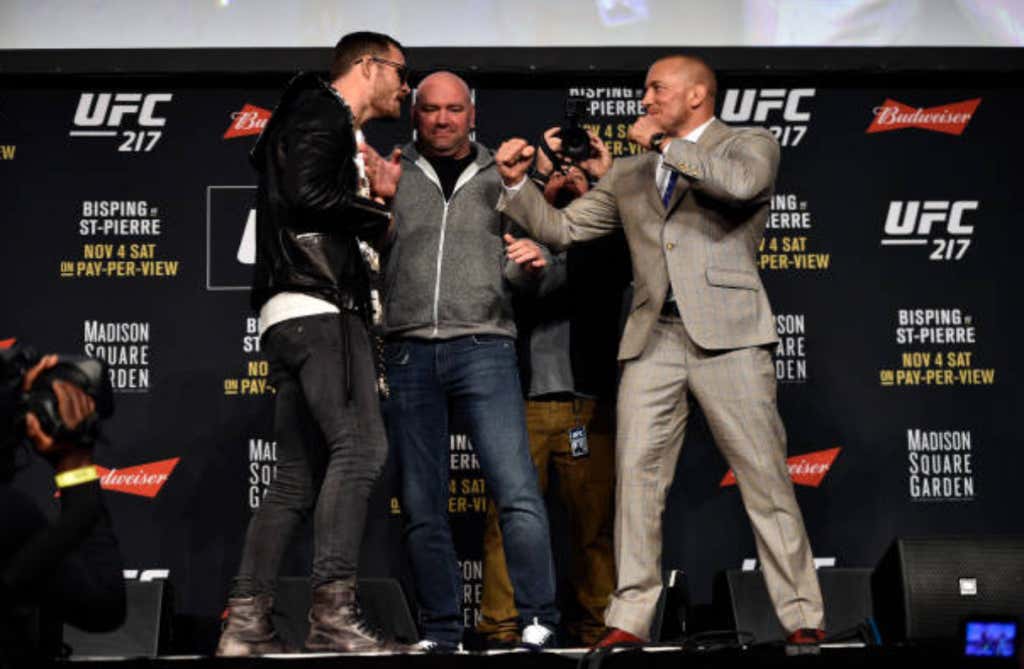 The MAAAAAAIN EVENT, for the UFC Middleweight Championship of the World! Boy am I excited for this one. This is the fight of the unknown. Nobody (including oddsmakers) knows what to expect, and much like when storylines in professional wrestling are unpredictable, there’s nothing I love more. Bisping is a fantastic heel, and I love him for it, but I’d love to see GSP return after an incredibly long layoff and reclaim his spot back at the top of the UFC mountain even more, so I’ll rooting for him (cageside with Big Daddy Trent). How does he do it? Through unpredictability in his wrestling and cardio.

St-Pierre is one of the best takedown artists of all time, and he always had the ability to grind out wins on the ground, but a few things are going to make that difficult against Michael Bisping:

-He’s had four years off, so his endurance could not hold up against Bisping’s (which is always deadly).
-He’s not a natural middleweight, and he’s packed on all of this extra weight to fight here.
-Michael Bisping is so, so, SO great at making adjustments mid-fight, and there’s the chance he could stop all takedowns by the third or fourth round ESPECIALLY if using up too much energy becomes an issue for GSP.

Bisping, being the bigger man, will attempt to pressure Georges and work him against the fence, tagging him until his face turns purple like this: 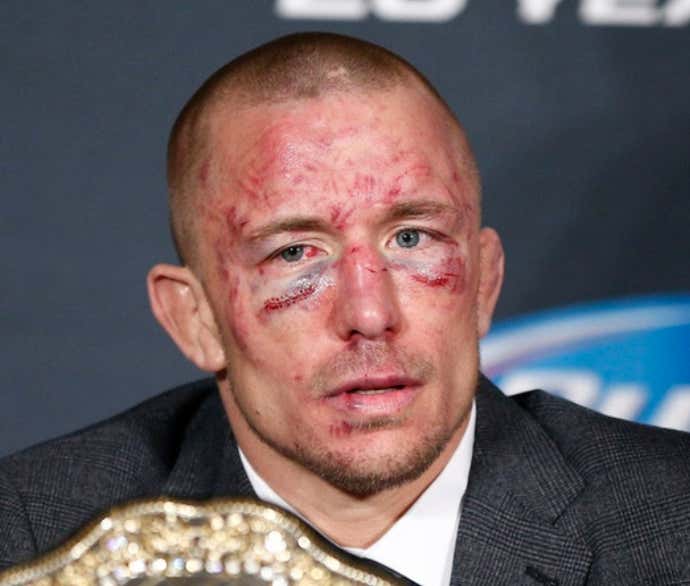 I’m picking Georges St-Pierre by decision, fully admitting my heart and the live aspect plays a factor, but won’t argue anyone that goes with the Middleweight Champ defending his crown successfully. 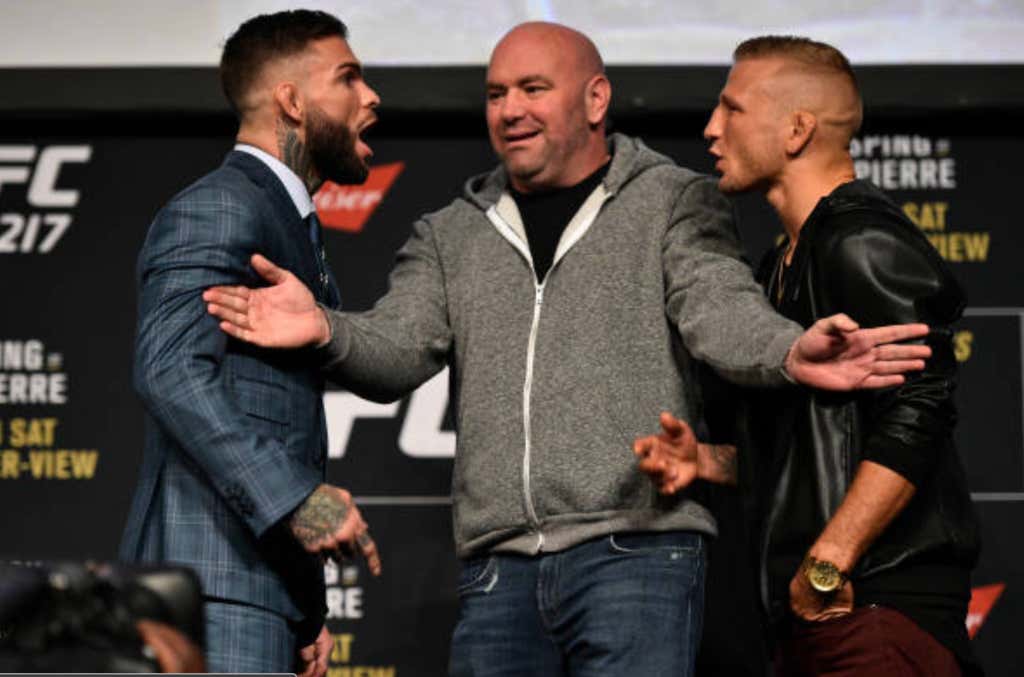 All things considered, this is the true main event of UFC 217. It could wind up being the fight of the year, too. Cody Garbrandt, a ridiculous powerhouse with cinderblock hands and impeccable timing, going up against the teammate who turned his back on Team Alpha Male, one of the best technical strikers in MMA, TJ Dillashaw. These two are SO talented, and their footwork is SO good, and their angles are SO sharp that this should be a back and fourth slugfest for the ages. The one key difference between Garbrandt and Dillashaw that I see playing a factor here is power. TJ’s got it for sure, but nobody in the bantamweight division (expect POSSIBLY John Lineker) hits as hard as Cody Garbrant, who I think will rise to the occasion tomorrow like he always does, and knock TJ Dillashaw out…again. 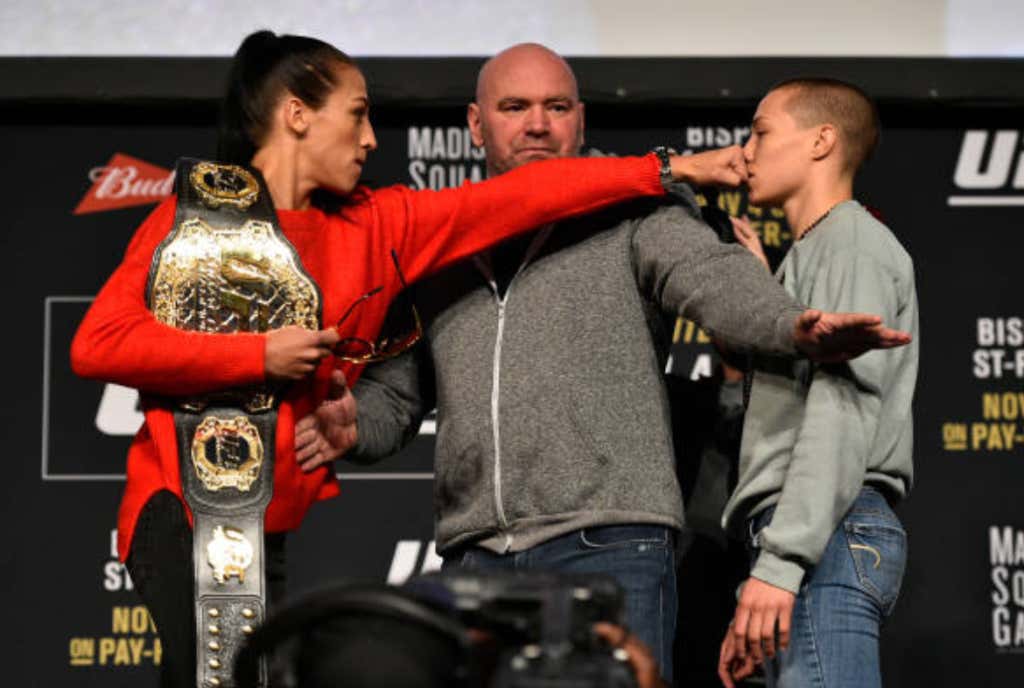 This fight has a drastic difference in odds for good reason. While Rose Namajunas is a bad bitch and she’s been one of my favorite killers in the strawweight division for a few years now, she’s still just not at Joanna’s level and it’s quite literally that simple. If Rose somehow, someway, pulls off the upset, though, man. That’d probably be the story of the night no matter WHAT happens in the other two title fights. 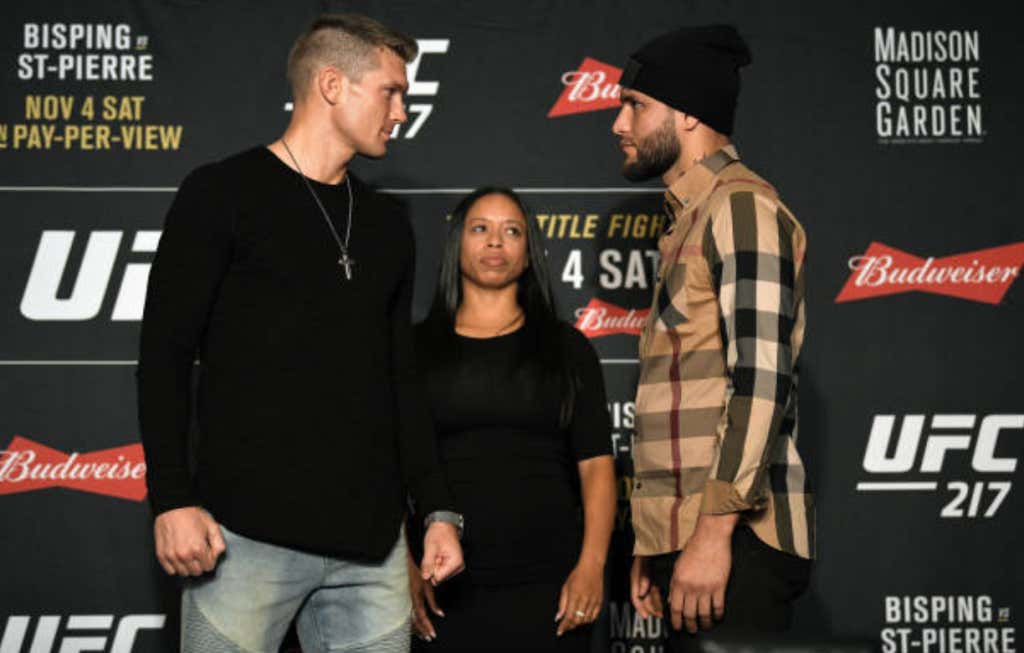 This is such an intriguing matchup because you’ve got Wonderboy Thompson, a guy who isn’t necessarily one dimensional, but he does focus almost entirely on karate, and then you’ve got Jorge Masvidal, a guy who can do fucking anything. If Masvidal can apply enough pressure to back Wonderboy up against the fence and get up close, get in the clinch, and throw combos, he can knock Stephen Thompson out. If he can’t deal with the slight awkwardness that fighting Wonderboy brings, though, and falls into the range where those signature karate kicks will land on the counter, he’s going to have a very long night. As a Wonderboy fan, I’d like to see him rebound from his last horrible fight and return to his Rory MacDonald-beating form at MSG, and I think he will, because now there’s something to truly prove. A fire that’s burning under him. 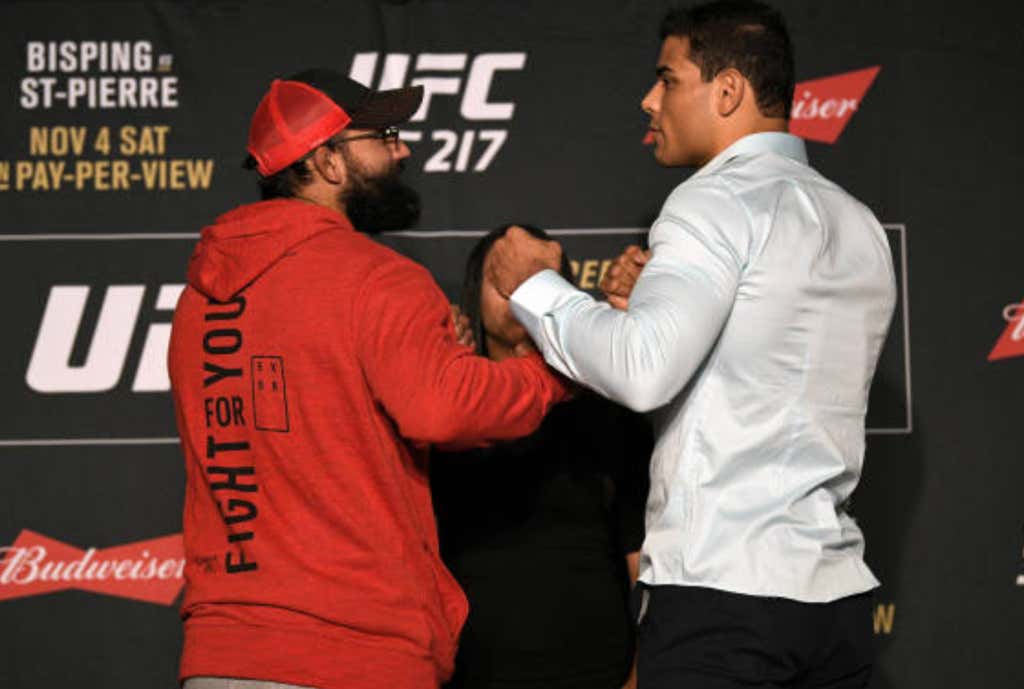 While Joanna vs Rose has the biggest difference in odds, I think this fight has the biggest difference in skill…in 2017. Don’t get me wrong, Bigg Rigg in his prime was lightyears above Paulo Costa right now, but Bigg Rigg’s not in his prime. He’s far past it, and with a deadly matchup like Paulo, a guy who’s 10-0 with 10 finishes (9 by KO/TKO, 1 by submission), it’s almost like the UFC wants Hendricks to get knocked into retirement. This is the easiest call of the night for me, but a quick knockout in the first fight of the main card will amp The Garden up for the rest of the barbaric human cockfighting in a big, bad, way.

Personally, I can’t fucking wait for this card and I may not be able to sleep tonight thinking about it. Trent and I are gonna be in the fifth row thanks to Reebok, so hopefully that corn fed boy from Iowa gets some blood splattered on him as a symbolic MMA fan christening. We’re taking over the @barstoolsports instagram as well and it should be a really fun time so make sure you’re following. Like I said earlier, tomorrow I’ll fill you in on how we got here, so be on the lookout for that as well.