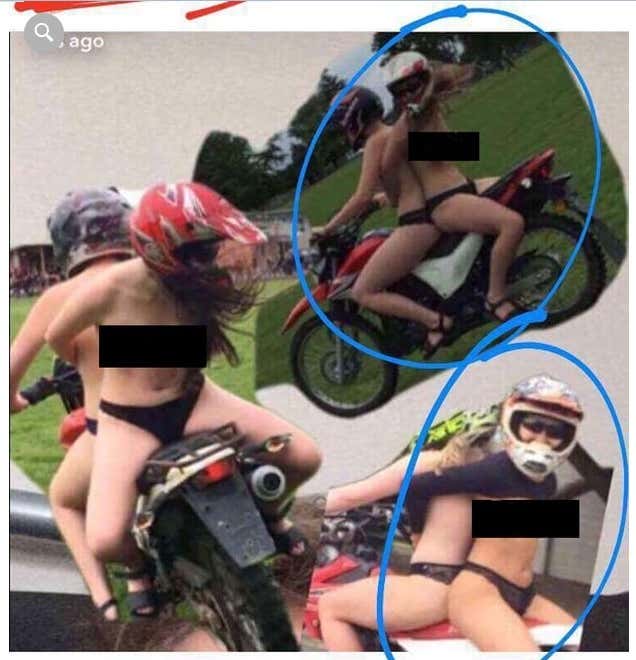 New Zealand – The father of a schoolboy who suffered a badly cut leg when run over by a topless dirt bike-riding schoolgirl doesn’t want charges laid. …

Hamilton Boys’ High School student Kyle Kirsten suffered a deep gash to his leg when hit by a girl from Waikato Diocesan School on the Boys’ High field at lunchtime yesterday.

Students have told the Herald the incident involving six girls wearing nothing but underpants and helmets was part of an annual streaking event.

One of the bikes rode over the Year 12 boy’s leg, causing the rider to fall off. One of the girls is alleged to have given the middle finger before driving off.

The victim lay on the field until he was eventually helped off the field and taken to hospital. He has since been discharged and is now recovering from his injuries at home.

Posts on social media referred to the boy’s wound as a “very deep cut”.

“Doctors said it’s actually down to the bone.”

Kyle Kirsten’s father Glen, who met with police this morning, said he was satisfied the incident was a prank that “has gone a bit wrong”.

“My son is fine. He has an injury but that will heal,” he told the Herald.

Congratulations are in order to Glen Kirsten for getting it. For being one of that rare fathers who remembers what it was like to be a high school senior. For understanding the old adage, “Pain heals. Chicks dig scars. The glory of being the kid who was cool about getting run over by topless girls on dirt bikes lasts forever.”

Seriously, as regrettable as getting your leg gashed open down to the bone may be, not raising a huge stink about it gives him the kind of capital he could never get if the bike missed him. He could get these chicks suspended. His dad could sue the school district and clean up. But instead, he’s putting his own needs aside and thinking of the boy. Of what it will mean to his son to finish out his school year being owed in a big, big way by the kind of chicks with so few inhibitions they’ll strip down to their underpants and ride crotch rockets around campus. That is worth way more than money ever could. So kudos to you, Waikato Diocese Father of the Year.

P.S. Is everything in New Zealand more fun than it is here? At Weymouth South High, I don’t even remember our girls senior prank, but I think it had to do with taking the plastic cow down off the roof of the ice cream place. What sad, uneventful teen years I had.