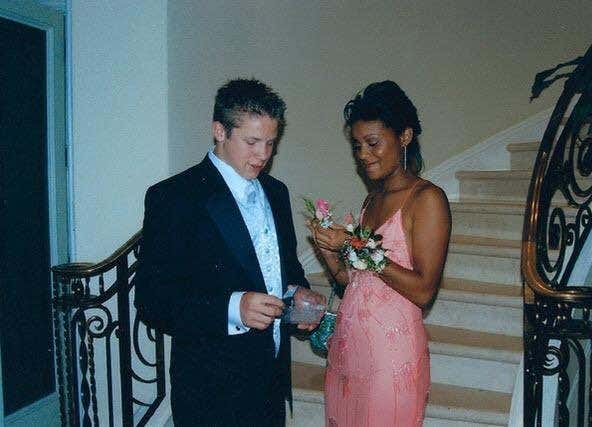 So Julian Edelman’s book Relentless dropped last week. And according to Boston.com, among some of the other revelations in it is that growing up in California, he dated the daughter of a legend:

Julian’s high school girlfriend was Jaqui, a girl who he met in eighth grade. She lived up the street from him, so he’d usually ride his bike to her house, and then they would go to Taco Bell or play driveway basketball. But Edelman was terrified of actually going inside her house because Jaqui’s dad was none other than former San Francisco 49ers wide receiver Jerry Rice.

“He was a god to me,” Edelman writes. “The first time I saw him, we were shooting hoops and he came out on the front steps, no shirt on, all yoked up, gold chain, six-pack abs. I was shook, and I think that might have been the point Jerry didn’t really talk to me and never talked to me about football.”…

They both attended the 2017 Kentucky Derby, so while at the horse race, one of Edelman’s Patriots teammates couldn’t help but make a comment.

“I hear Jules spent a lot of time at your house when he was a kid,” quarterback Tom Brady joked.

Edelman says Jerry laughed, though he’s not sure if he actually found it funny.

Tom Brady, bringing the passive/aggressiveness down from the clouds! In case you don’t have the kind of memory for holding a grudge that I do, here was Jerry Rice on January 22, 2015 to Jim Rome:

I’m going to be point blank, I feel like it’s cheating. Because you have an edge up on your opponent and its unfortunate that it happened…. I’ve played in cold weather, I know how hard the football is and you can grip the leather just a little bit better [if it’s deflated].

I think you have to really put an asterisk on it, because this is going to follow them, you know, for the rest of their lives, because when you look at it, when people go back and they think about the New England Patriots, they’re going to think about these controversies.

I’ve always wanted to do things the right way. I didn’t want to take any short cuts or anything like that.

And here was that same Jerry Rice like just days earlier on an ESPN feature about wide receiver gloves, as unearthed by some very pissed off Patriots fans:

Rice was one of the earliest Deflategate Truthers, and definitely in the Top 5 most hypocritical. Just your prototypical, Adam C. Best-caliber “Do as I say, not as I do” guys. Throwing asterisks at all of Brady’s accomplishments like Ninja stars for the crime of nothing, while everything in his career is legitimately tainted by actual cheating, by his own admission.

So what do you to with a guy like that? What’s the one revenge you can get on him that he has no answer for? That the guy who was catching your passes once had his non-Stickumed hands on your smokeshow daughter. And I love Brady for bringing it up. The world’s nicest man in his Kentucky Derby hat and bow tie on the outside. But inside, he’s just diabolical. Verbally stabbing Rice in his most vulnerable place and just leaving him to suffer. Well played, Brady. Jerry Rice made a very powerful enemy that day back in 2015. And as the old Klingon proverb goes, “Revenge is a dish best served cold.”