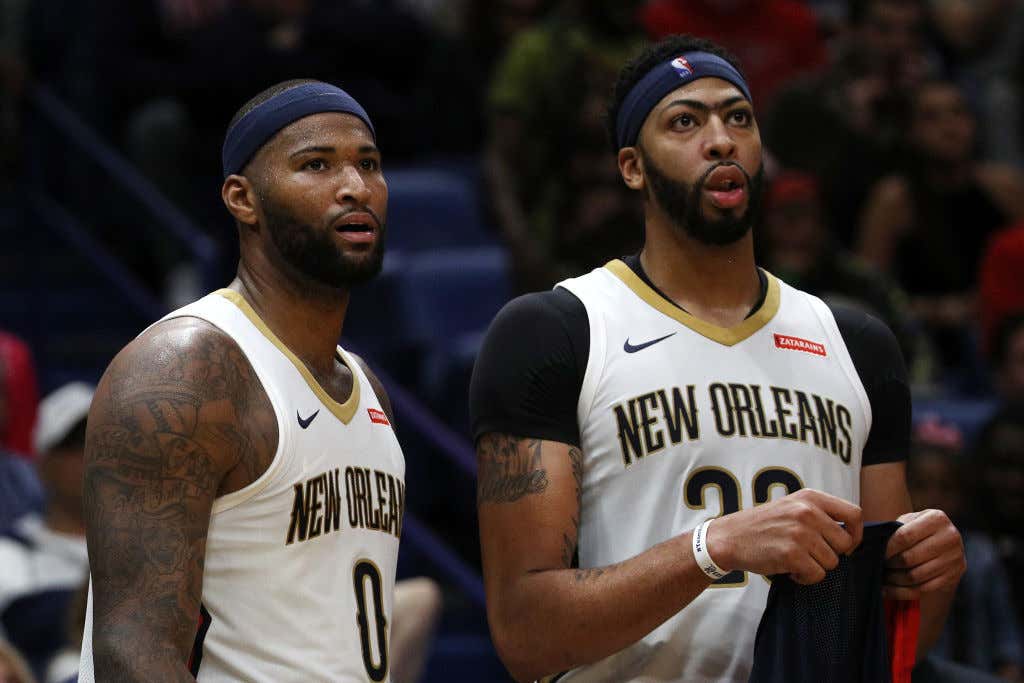 Welcome to another edition of Last Night In The NBA where we catch you up on everything that happened from the night before in the Association. There were 8 games on last night, some closer than others, but as a whole it was another entertaining night of basketball. Perhaps you were at a Halloween party or something of the like and missed it. That’s OK, just keep reading and you won’t feel left out. Here’s what happened

We do this what seems like every year. Whenever the Cavs gets off to a slow start we start to question them, and then year after year after year after year after year Lebron still finds himself in the Finals. Because of that I won’t read too much into this loss other than the fact that the Cavs defense stinks out loud. It’s really fucking bad. Now there is certainly time to right the ship, but add this to the list of bad losses to start the season.

I mean look at this box score. Look at the Pelicans starters!

Of their 123 points, just 9 of them came from someone not in the starting five. That is ridiculous, and here’s what it looked like

I guess AD’s knee injury is nothing to worry about which has to be a relief for NO fans. If we’re being honest, I cant remember the last time there has been such a dominant frontcourt like what NO has. If they can figure out their spacing/shooting/guard play, they are going to be annoying for teams in the West to play.

For CLE, Lebron, Wade, and Love showed up, but where the rest of their team was I’m not really sure. 18 TOs, and just three players in double figures while also giving up a billion points probably isn’t what they had in mind. The Cavs have now lost to the Magic, Nets, and Pelicans. I would argue their opening night win doesn’t count given what happened, and their only other wins have been MIL and CHI. Lebron is so going to leave these dudes I can’t wait.

This Wade dunk was nice though

Please wait for the full blog and while you do just know the Celtics are the hottest team in the East and have the most road wins while playing the best defense. The haters, of which there are many, are probably so upset this morning. Sad!

Nice, but not so nice when you really think about it. This game was close for the first 12 minutes, but then a 24-8 second quarter pretty much killed all hope for the Bulls. Russell Westbrook had his 3rd triple dub in 6 games with 12/13/13

The Thunder finally got their first road win of the season, and I don’t think many will end up coming easier than this one.

For CHI, woof. Ending the game with 28/27% splits and 19 TOs is insulting to me, and insulting to the game of basketball. I’m so offended I can’t even bring myself to show you the one bright spot which was Baby Dirk’s 15/8. I am that disgusted. You can be shitty CHI, but you can’t be THIS shitty. We’ve seen teams score 69 points in a goddamn half let a lone a whole game. Clean it up.

Are the Grizzlies for real? You almost are required to say yes right? A 5-1 overall record, their undefeated at home, and have wins over GS, and now two over HOU. That seems pretty for real to me. Here’s what’s crazy about this win, not ONE starter had double digit points! Conley/Gasol went a combined 5-18 and had just 14 points. They pulled this out by playing solid defense, causing 17 TOs, but also got a throwback performance from Chandler Parsons. I know! He IS in fact still in the NBA you didn’t just misread that. He had 24 points on 9-11 shooting. Seriously.

They also got good production from their backup guards, getting 31 points on 11-22 shooting from Evans/Chalmers

For HOU, no Eric Gordon or CP3 obviously hurts, Harden didn’t shoot the ball great, and unfortunately they wasted a 7-11 from behind the arc performance from Ryan Anderson

As long as the Rockets don’t have to play MEM, they should be fine.

In the battle of futile NBA teams, the Sixers held on for dear life to get their second win of the year. As expected, it was Simmons and Embiid that carried the load, as the team got 46 points on 18-34 shooting between the two.

We can make all the jokes we want about these dudes and their health, but what you can’t joke about is what they give you on the court when they are actually healthy. Both these guys are legit and if you say otherwise you’re just being a hater. Trust me, as a Celtics fan to have to say that makes me want to vomit, but it’s the truth.

For DAL, I mean at 1-6 their season is basically over. That doesn’t mean we can’t enjoy some of their nice plays though

Now this is more like it! How did the Lakers follow up their exciting OT win over WSH? By not scoring over 92 points in back to back losses. The Jazz turned it over 21 times and the Lakers still couldn’t break 85 points in this game. That’s just too bad. In a battle of rookie point guards, it was Donovan Mitchell that won, and frankly it wasn’t even close

On the whole it was a pretty balanced attack from UTA, with five players in double figures

For LAL, again they’ll never admit it, but Lakers fans have to be disappointed with what Lonzo is giving them. If any other rookie was having his type of production, people would be mad and say he had to go to the G League to figure stuff out. He has played in 6 games so far this season. In 5 of them he hasn’t shot better than 30% from the field. In 4 of those 5 he hasn’t shot better than 28.6%. He has four games with at least 4 TOs. He has a PER of 9.07. Yeah wow he had a breakout game against PHX, he hasn’t been in double figures in any other game! I’m sorry but if you’re take about Lonzo so far this season is anything other than he has stunk, you’re just afraid to tell the truth.

He’ll be fine, but so far, STINKS.

This was actually a pretty close game until the final few minutes of the fourth, and like a good team POR made enough plays down the stretch to hold on and improve to 4-2 on the year. It certainly helps when your backcourt gives you 48 points, and looks like this

Nurkic also did a whole lot of this

to finish with 17/9, and POR had a total of 7 players in double figures. That’s good balance.

For PHX, at least they had Devin Booker

Say what you want, but this is a pretty good list to find yourself on 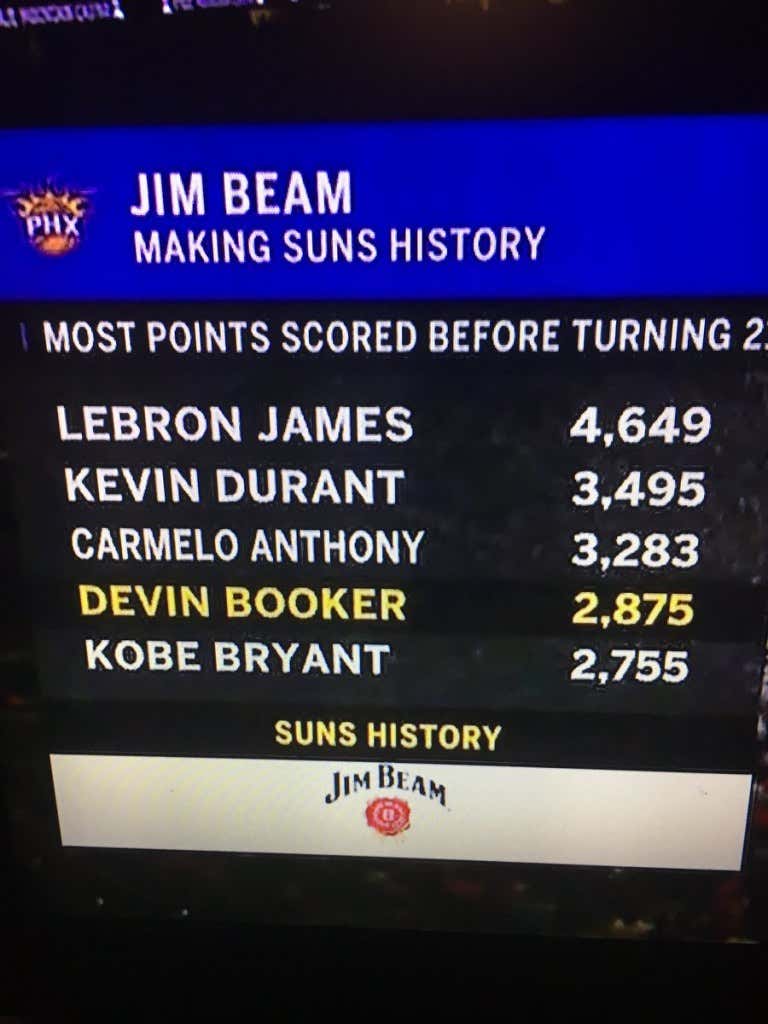 Talk about second half collapses. The Clippers scored 31 points after halftime, and in an NBA game, against real NBA players, that is in fact not good. The Pistons didn’t even shoot the ball that well, but when the other team refuses to score I’m not sure you have to.

For LAC, Blake did some nice things with his 19/11/4, and Austin Rivers made 6 threes, but other than that it was a whole lot of meh

And with that, you are now all caught up on everything that happened Saturday night. There are 7 more games today, so if you’d rather spend the day watching football that’s OK, just make sure to come back here tomorrow morning and I’ll fill you in on what you missed