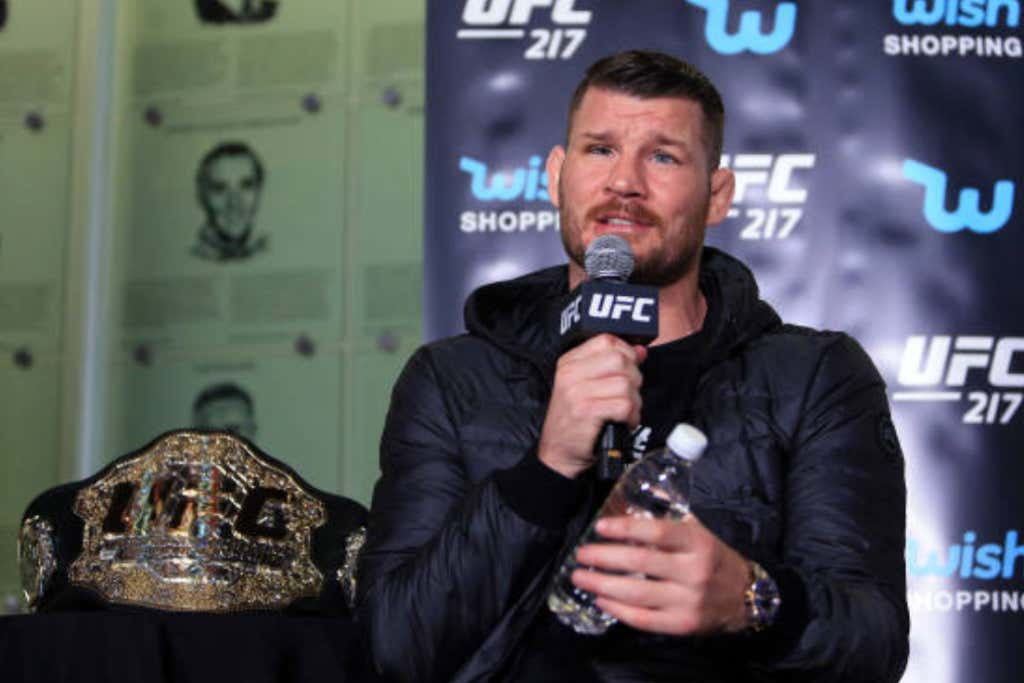 MMAFighting- Just over a week away from UFC 217, Michael Bisping has more to worry about than just Georges St-Pierre. The UFC middleweight champion is being sued by a teenager, who claims Bisping choked him at an Anaheim, Calif., gym in July, MMA Fighting confirmed Wednesday.

According to the complaint written by attorney Gavril T. Gabriel, Georgakopolous was working out with a friend at the 24-Hour Fitness when he turned to pick up weights a few feet away. The friend, per the complaint, could hear someone yelling at Georgakopoulous for taking his weights. That man was allegedly Bisping, who called Georgakopolous an “idiot,” “you little punk,” and said, “you don’t know who I am!”

The complaint alleges that Bisping then extended his right arm and choked Georgakopoulous for “two to three seconds,” not allowing him to breathe. “A larger man” stepped in to break it up, but Bisping asked to take it outside, per the complaint. That’s when 24-Hour Fitness staff got involved and separated Bisping, Georgakopolous and the crowd that gathered.

Let me put this out there before we begin: ALLEGEDLY. I have no idea how much of this story is true. That being said, I want all of it to be true so badly.

I love Michael Bisping. That may be jarring to some of our readers, because I generally don’t like assholes, but he’s the closest thing the UFC has to a vintage WWE heel. Conor McGregor, yeah, kinda, but he’s not reeeaaally a heel. Most fans like him, and he NEVER gets booed because Ireland backs him at every turn. Bisping goes above and beyond to get booed. He wants people to hate his guts come fight night. Calls out people on the roster 50lbs below his weight class just for the fuck of it. Plays into the “dodging fights” rumors even though he hasn’t turned down a fight in years. And now…he’s choking a little shithead teenager at a 24 Hour Fitness. HOW DO YOU NOT LOVE THIS GUY?!

Now, of course, there could be bad repercussions to these actions and Michael Bisping could be punished by Dana White for giving the company a stigma it doesn’t need right now. Let’s see what the UFC President had to say…

“Some fucking meathead got into an altercation with Bisping at the gym and he’s now trying to sue him,” White told the Real Quick with Mike Swick podcast recently. “I gotta talk to Bisping but I’m sure it’s that typical pussy who opens his mouth at the fucking gym, then Bisping goes over and – I don’t know what Bisping did to him, but now he wants to fucking sue Bisping. You should have shut your fucking face in the first place. Fucking embarrassing. You’re a clown. Guys like him are a fucking embarrassment.”

That’s why, no matter how much of a goof Dana can be, he’s my favorite. I’ll take him over some fucking clown like Bettman or Goodell any day of the week.

UFC 217’s gonna be very interesting because I’m not strongly rooting for anyone in any of the 3 title fights, I’m just rooting for violence at the highest level.