New York actress Jordana Grolnick told Deadspin that Bush touched her during a photo-op at a theater in Maine last year.

“We all circled around him and Barbara for a photo, and I was right next to him,” Grolnick said. “He reached his right hand around to my behind, and as we smiled for the photo he asked the group, ‘Do you want to know who my favorite magician is?'”

Grolnick said that people in the room “laughed politely and out of discomfort,” and that former first lady Barbara Bush “said something along the lines of, ‘He’s going to get himself put into jail!'”

Grolnick appeared to reflect on the incident and offered advice to others: “What I’ve come to realize is that if we tolerate these small comments and grazes from men on the street or former presidents, they might assume that it’s ok with us, and they may take it as permission to do who-knows-what else,” Grolnick said.

Let’s say that the President’s explanation is true–that his hand rests lower in pictures because he’s in a wheelchair, and that he attempts to make people more comfortable with the joke. Does he do this to guys? Surely he’s been placed next to men in photos, so if they tell the same story, there’s probably truth to it. Then again, a simple solution would be to leave his hands in his lap. Look ma, no hands! = no sexual harassment accusations.

Still, it goes to show that even the President of the United States can’t get away with unwanted physical contact. Nobody is above the law. Look at this face: 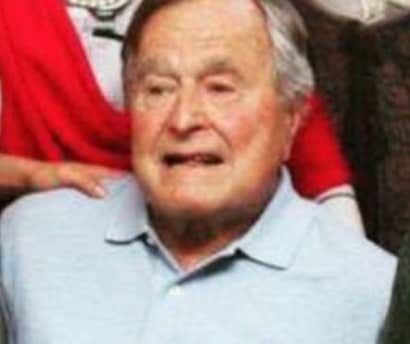 Dude doesn’t even know what planet he’s on. That’s the face of a guy who’s thinking, I can do whatever I want. I don’t have much time left on earth. I don’t give a shit about my legacy. I was a one-term President who was succeeded by Clinton, the 2nd greatest cocksman ever to drop trou in the oval office (Kennedy, and it’s not even close). I spent my life dedicated to my country, my wife, and my sons. By God, I’m going to grab some butts on my way out.

It seems that each day, there is a new accusation of sexual harassment against a prominent national figure. It’s pretty brutal to think that this shit has been occurring across industries for many, many years. From Hollywood to the White House, from Fox News to a comedic legend in Bill Cosby. I’m hopeful that the recent revelations from these courageous women will tack a warning sign at the fore of the national consciousness that reads, “Don’t fuck with us.”