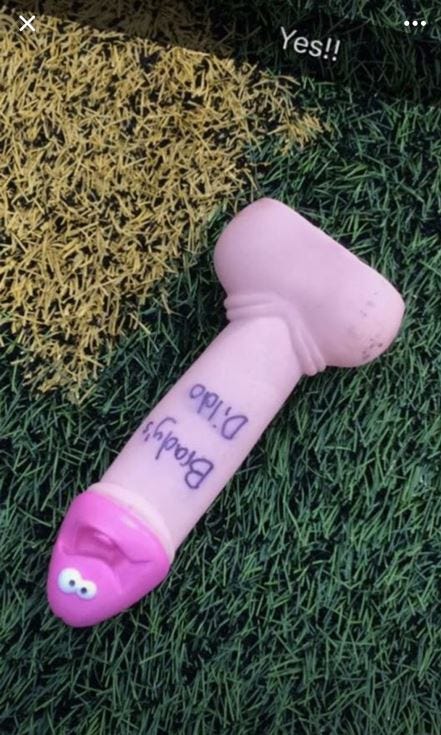 Source – A South Florida teacher has been fired after throwing an X-rated surprise party for a former student. The party took place at Mater Lakes Academy, which is a charter school for grades six through 12 in Northwest Miami-Dade.

According to parents, the party happened in the dance teacher’s classroom after school Wednesday. The mother of one young female student at the party said it was a gathering for the school’s dance team. …

“In the videos, we see how they were preparing for the surprise party. And as the boy walked in, they surprised him with a hat that had a penis attached to the top and a string to be able to pull it so it can get erected,” said the mother.

“There was a cake that had a lollipop shaped as a vagina,” said the mother. …

The party happened in front of students as young as 11 years old.

Simply put, this just retired the trophy for the Most Florida Story Ever. It’s setting a standard that will probably be surpassed in weeks by an even crazier Florida story, but until then this is the one we should print off and put in a Time Capsule so our post-apocalypse survivors will know what life was like in America’s Wang, 2017.

But would you expect anything less out of Miami-Dade? My kids happened to go to the elementary school where they don’t throw Halloween parties or let even the little kids dress up. Where cupcakes are now strictly verboten. And where a kid has a better chance of walking in pushing a 50-gallon drum of methylamine and a gross of Sudafed saying he’s going to the science lab to cook meth than he does of carrying a peanut butter sandwich through those doors. But in God’s Waiting Room, the only rule is there are no rules. And if a couple of preteen’s moms can’t handle that their daughters’ dance teacher is desperate to be the Cool Teacher, like a more deranged Mean Girls Amy Poehler, well then they’re raising kids in the wrong place. Take your Puritan attitude and your fear of youth-sized novelty hard-on hats and home school your little brat, sob sister. Sixth grade bachelorette parties are how they roll at Mater Lakes Academy.