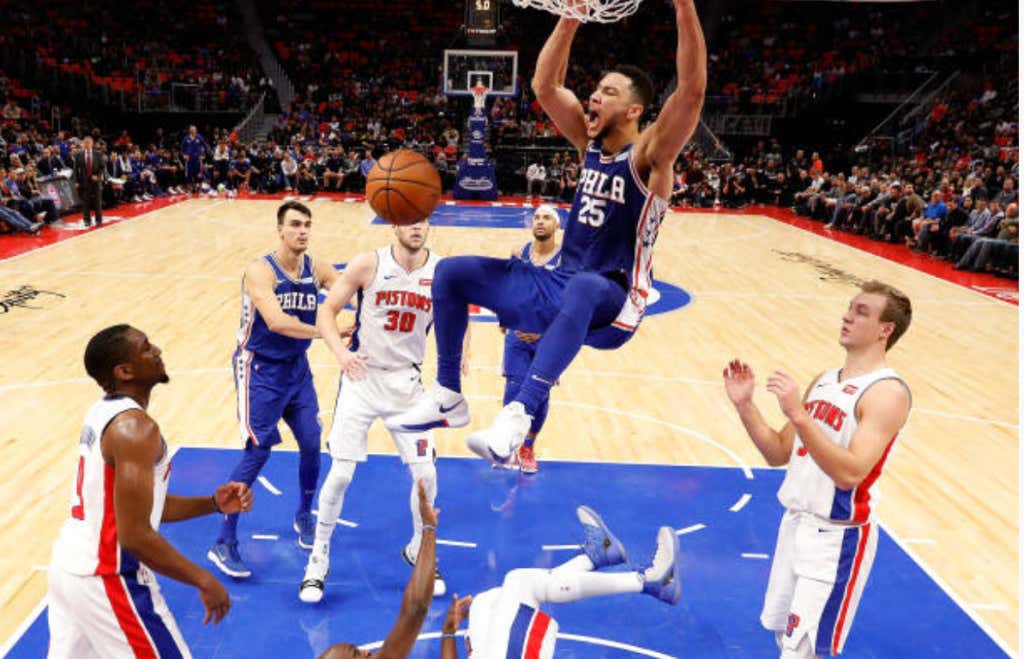 Welcome back to another edition of Last Night In The NBA where we catch you up on everything that happened from the night before in the Association. There were 8 games last night so a lot went down, don’t beat yourselfg up if you didn’t see it. I’m here to fill you in. Here’s what happened

With good reason, I think we were all a little skeptical on how Ben Simmons would look. Philly fans were hopeful, but deep down were nervous. The rest of us didn’t understand how someone could have this type of hype while not playing a single second. Well, through 4 games, you can’t say anything but the fact that he has been VERY LEGIT.

you can hate Philly, you can make fun of the Process because they can barely beat anybody at the moment, but you cannot say that Simmons hasn’t lived up to the hype. If any of our favorite teams had a rookie that was playing like this, we’d be pumping our chest and screaming from the mountains. Sure he has a ton of stuff to improve on, but this is nasty

And then let’s not forget the other question mark, Joel Embiid. Another player with a ton of questions who has been nothing but spectacular in his opportunities so far this year

See it’s important that Philly fans focus so much on these two and do their best to try and ignore what a disaster Fultz has been. He went 1-4 last night in 16 minutes, had 3 assists and 3 TOs, and has 33/0% splits on the season with a PER of 4.32. Something stinks. PHI’s first win was nice because they responded to a late Pistons run, but it was also lucky given the 21 TOs they had.

For DET, it was ugly from the start. They finished with 38/20% splits, and while they kept another team to under 100 which is usually their key to success, they forgot that you also have to put the ball in the basket a few times. While they did have moments, they were few and bar between

A big second quarter for the Heat was the main difference in this game, bringing MIA to 2-1 on the season. They had 5 guys in double figures, got great contributions from their bench, and were fortunate their 19 TOs didn’t come back to bite them. Starting a three guard lineup, it actually worked out well for MIA, with Dragic dropping 19/6

and Dion Waiters had 10 points on 50% shooting. Not to mention, in helping fill the void of not having Whiteside in the lineup, Kelly Olynyk came out of nowhere with a 10/10 night!

For ATL, they actually didn’ty play that bad! Yeah they turned it over 20 times, but they also had two guys drop 20 points in Bazemore and Prince, and John Collins once again had a double-double with 14/11.

It’s sad that this is probably the best the Hawks will shoot and it still didn’t get them in the W column, and they are dropping fast. Now 1-3, they’ve lost three straight

Maybe everyone calling for the demise of the Grit and Grind Grizzlies was a little overblown! After being GS, they followed that up with handing the Houston Rockets their first loss of the season. Marc Gasol continues to be unguardable, he had 26/5 on 8-15

and despite going 3-10 Conley was still able to make an impact with 17 of his own.

All the sudden it’s the Grizzlies who are 3-0, and may have two of the best wins in the league under their belt. Porving once again, you can never count out MEM as long as it has Gasol/Conley.

For HOU, this was really only the second good team they’ve played so far this season, and they got some decent performances, for example Eric Gordon went for 27 and made 5 threes

Other than those two there wasn’t much help, Capela had some alley-ooops, but the Rockets turned it over 17 times and shot 23% from behind the arc. Basically they played like shit, and in the West, you aren’t going to beat many teams playing that way.

Stop me if you’ve heard this before so far this season. The Bucks were in a close game late into the fourth quarter, and then Giannis took over and pulled out the win while finishing with an insane line. It seems like every single Bucks game so far this year has followed this formula, and last night was no different. 32/14/6 on 13-21 for Giannis, it’s starting to get ridiculous

I would say he’s the early candidate for MVP, but, then this happened

That has to take a few points away.

For CHA, they did their best to try and close this out, Dwight had 8/22 with 4 blocks which wasn’t terrible, but just like we saw with HOU, you can’t come up lame in the fourth quarter. They scored just 17 points, none of their starters could really hit an outside shot to save their life, Williams was 3-10, Kemba 6-15, Lamb 5-17, and Bacon 2-6. In fact that Frank The Tank dunk was probably their best moment of the night.

Don’t let that final score fool you, this was a close game through the first two quarters last night. GS jumped out to a quick 40-24 lead, and then DAL punched right back with a 28-25 second quarter. That seemed to take all their offensive powers as they scored just 41 the rest of the game.

Draymond also chipped in 10/7/8 on 50% shooting, but this is all stuff we’ve seen 10000 times so it’s not that shocking. For me, the play of the night came at the end. You want to know why it’s so annoying some point of every season when the Warriors complain about a team disrespecting them? Plays like this

Yes, very impressive dunk, can’t take away from that, but what a gigantic asshole move. I would imagine he’s going to get a stern talking to from Kerr & Co

Also your constant reminder that the Bulls decided that player couldn’t help their team. Morons.

is it really fair that the Spurs can be 3-0 with a couple quality wins all without their basketball robot? No, not really, but that’s SA. Impossible to kill. This was a game that was close the entire way, with every quarter being within 3 points, the Spurs somehow were able to overcome 20 TOs to remain undefeated.

LMA has been great carrying the load with Kawhi out, including last night’s 20/8

but the real surprise came from 21 year old Dejounte Murray who had 16/14/6. No big deal, just another end of the first round steal that will probably be a HOF Spur. Wheh will the Spurs finally catch a break?

For TOR, you guessed it, it was the DeMar DeRozen show who had 28, and not much else. I think their Twitter summed it up perfectly

Another close game throughout, don;t look now but the Wizards are 3-0 and look great. Six players in double figures this game, each of their starters played well, and Wall/Beal did their thing

Remember road wins were where the Wiz struggled last year, so to hold the DEN offense to just 104 points is a step in the right direction.

For DEN, Jokic finally scored, so that nightmare is over, he finished with 29/9/5

But also had this iffy play during a timeout

Also, quietly, Paul Millsap is showing no signs of his age. He went for 17/8 on 8-15 and so far this season is averaging 18/7.7, Early returns on that investment aren’t half bad.

I’m going to say there is almost no chance you watched this game. You don’t know what you missed! Of course the Suns were going to go out and get their first win of the year as they are right in the middle of a complete front office disaster. That makes so much sense.

Credit Mike James for making a name for himself and playing pretty well to start this season. He had 18/7 on 8-10 shooting, which complimented Booker’s 22/5 on 8-16 nicely.Rookie Josh Jackson was solid as well, going for 15/5 on 6-8, so maybe it was Earl Watson? I mean PHX did shoot 54.5% from the floor, and in bizarre fashion, didn’t lose a game in which they lost the TO battle by 12.

For SAC, you can’t lose this game. That’s very Kings of them. Their starters didn’t really show up which meant it was up to the bench to pick up the slasck, and they did, they just came up short

And with that, you are now all caught up on everything that happened last night. There are 6 more games on tonight, so for whatever reason you end up missing some stuff, just make sure to check back here tomorrow morning and I’ll fill you in!