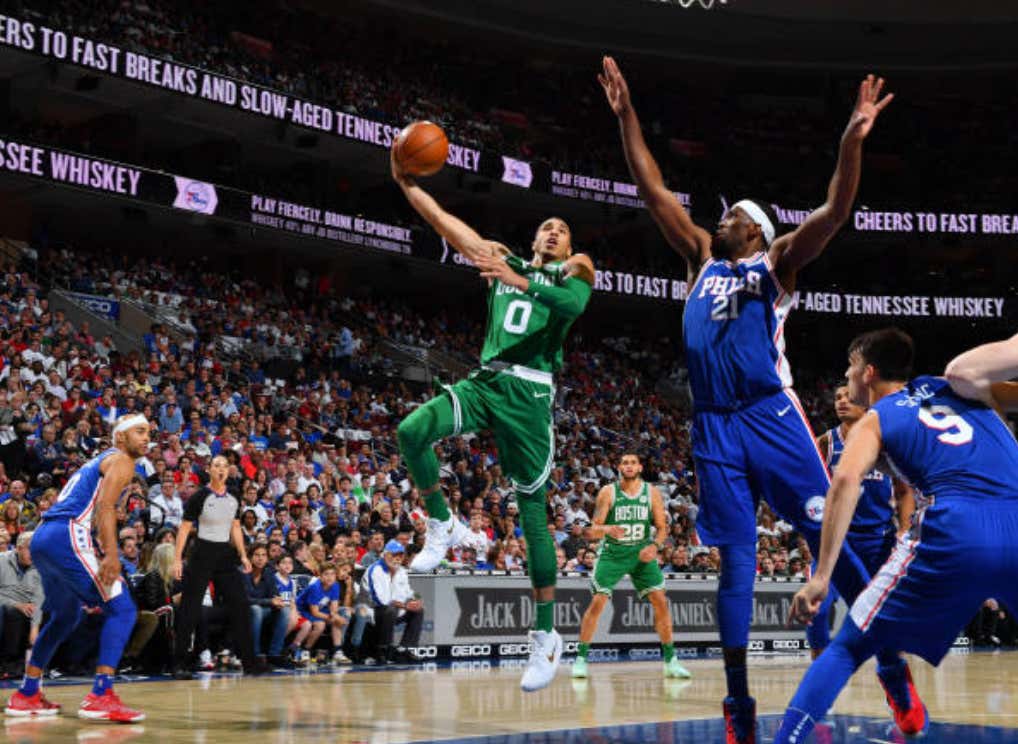 It’s not going to always be pretty, in fact, sometimes it will be downright hard to watch, but a win is a goddamn win. After the first two games this team had, the injury, the blowing fourth quarter leads, with 0-3 staring them right in the face, for the first time this season the Celtics actually closed one out. They’re in the win column. 0-82 is now officially OFF the table.

Instead, we got our first look at The Process, you heard about that right? The greatest collection of young basketball talent on the planet. Certainly the team poised to take the Celtics spot in the East didn’t you know that? Well I don’t think Philly fans thought any part of that Process included losing a home opener to like 75% of the Maine Red Claws roster. Whoops!

– This may be the only time we have this opportunity, so you bet your ass I’m taking advantage. It’s time to celebrate the hero of this game. The guy who I think only my Dad had any faith in when it came to impactful moments. Shane Larkin, you had yourself a HOF game

This team needed a fourth quarter closer, and here comes Larkin out of nowhere with 8/2/2 on 3-3 shooting (2-2 from deep) in 10 minutes. What stood out obviously was his play in the P&R, his decision making, and clear evidence that he was not afraid of the moment. That’s a dude with supreme confidence which is going to come in handy over the course of an 82 game schedule. What a find by Ainge.

– It’s probably going to be this way for the majority of their careers, but I get extra hyped any time Jayson Tatum gets to play PHI. Where he stacks up against Simmons/Fultz fascinates me. I would say after a few preseason games, and now what we saw last night, he’s closer to Simmons than Fultz. Those two just look NBA ready. His shooting percentages still need to come around, but we will all take 15/8 with 3 blocks in 32 minutes.

Out of all the impressive moments from Tatum’s night, I want to focus on one play in particular.

That’s a big boy move ladies and gentlemen. I’ve seen Pierce make this exact play about 10,000 times. Here’s why I like it so much. He realizes he has the much smaller McConnell on him, often times when we’ve seen Tatum have this sort of advantage, he goes back to his offensive crutch, which is the turnaround jumper. Here, he is aggressive, he gets to a great spot that he knows his defender can’t stop. Given the situation of the game, and how badly they needed a basket, this was exactly what I want Tatum to do and the type of shot I want him to talk. Through 3 games so far this year he’s averaging 12.3/9/1.7 with a 12.36 PER. I think we can all agree his rebounding and his defense are much better at this stage of the season than we expected.

– Finally, Kyrie closed a game. Against CLE he showed promise, but then didn’t take a shot for the next 5 minutes. Against MIL he was horrific, so here we were again, with a real tough spot staring them in the face, he responded. He had 7 points in the fourth in 6 minutes played, had a couple steals, and really delivered the backbreaking shots this team desperately needed

Like many other Celtics, the offensive efficiency still isn’t there yet, and I didn’t love his 4 assist 5 TO ratio, but I said before the game that this was the type of game you need your superstar to step up and win, and that’s what happened for the most part so I can’t complain too much. Sometimes you just need to get that first win under your belt to calm the nerves, and it wouldn’t surprise me if we saw a much more effective Kyrie moving forward.

– OK I’m starting to think this is something real. The Celtics again were solid as hell on the glass, winning the rebounding battle 55-47. Out of everything that is a surprise with this team so far, this is by far the biggest for me. I was expecting them to STRUGGLE right from the jump, but it’s been anything but. Think of last years team if they could rebound like this. Think of how good they would have been. That is what I think THIS team can be.

Who do I credit for this turnaround? Aron Baynes!

he has brought the rebounding toughness to this team that is clearly contagious. God I love Aron Baynes.

– Throw the percentages out, Al Horford came up big. 17/9/3 is nice and all, but I really just care about his fourth quarter. When things got tight, he responded by dropping 9 points on 3-4 shooting in 10 minutes. I liked how he continued to go down to the block and put himself in a position for high percentage shots, I liked his defense, I liked how he didn’t shrink in the moment. With Hayward out, we’re going to need more of this type of Horford. His chemistry with Kyrie is still a work in progress, and I can’t wait for it to finally get here.

– One thing that hasn’t been a disappointment so far this season, has been the Celtics defense. They made life impossible for Embiid (4-16), Saric (4-10), Simmons (4-11), and Fultz (2-9). This time last year they were giving up 200 points a night, so while individual defense may still be struggling for some people, as a collective group, they’ve been great.

– You know who isn’t afraid? Terry Rozier. He is turning Summer League Terry into a real thing during the regular season. He has some BIG TIME makes at a time when it appeared nobody else wanted to step up

Led the team with a +62 net rating. Hit a three. Had a couple rebounds. Played 3 mintues. #FREEYABU

– There were only 2 lead changes in this game. That’s wild.

– I think we’ve now seen through three games, that any team with any sort of strong aggressive wing is going to have success against this team. It’s just a little too easy for these guys to get into the paint and finish. Part of that is youth, part of that is guys like Tatum still needing to get stronger which he will, and part of it is we’ve played some pretty good SFs recently.

To me that’s why Baynes is so important. The Celtics need him to stay on the floor to help prevent guys from just abusing them in the restricted area. Sadly though, he fouls like every 10 possessions.

– Same goes for Jaylen. He has to get better at defending without fouling. He is now too important to this team’s success to be messing around like this. Offensively last night I thought he pressed a little bit (4-13), as he was the only starter not in double figures. Jaylen did get good looks that just didn’t fall so by no means am I concerned, but they did get lucky his egg didn’t come back to bite them

– Whatever the hell that was to end the second quarter and start the third quarter. I’m not sure it was basketball. Hated the hack-a-Simmons decision too.

– Screw Jerryd Bayless for that 7-12 performance. Where was that as a Celtic? Four made threes? Also, not great perimeter defense on JJ Redick either. Of all the possibilities of potential Sixers to worry about, these two were not on the list for me. I was wrong. Backcourts continue to dominate the Celtics.

– Those who hated on Ainge for that Draft Day trade. Trust the man will you.

– Absolutely everything about the officiating, for BOTH teams. I mean this was ridiculous. 54 combined fouls? Ruined the pace of play, ruined the flow, and there were a handful of awful calls on both sides. Not very often that happens, but there’s no way to spin it, it may have been some of the worst officiating we’ll see this entire season.

– I don’t think this needs to be explained. Going 22-32 from the FT line is so repulsive I don’t even want to relive it. We have a full blown FT shooting problem on this team right now, and it almost came back to cause them their third straight game.

But at the end of the day, I’ll take it. Celts needed this win in the worst way, and now they get the Knicks to hopefully keep this feeling going.