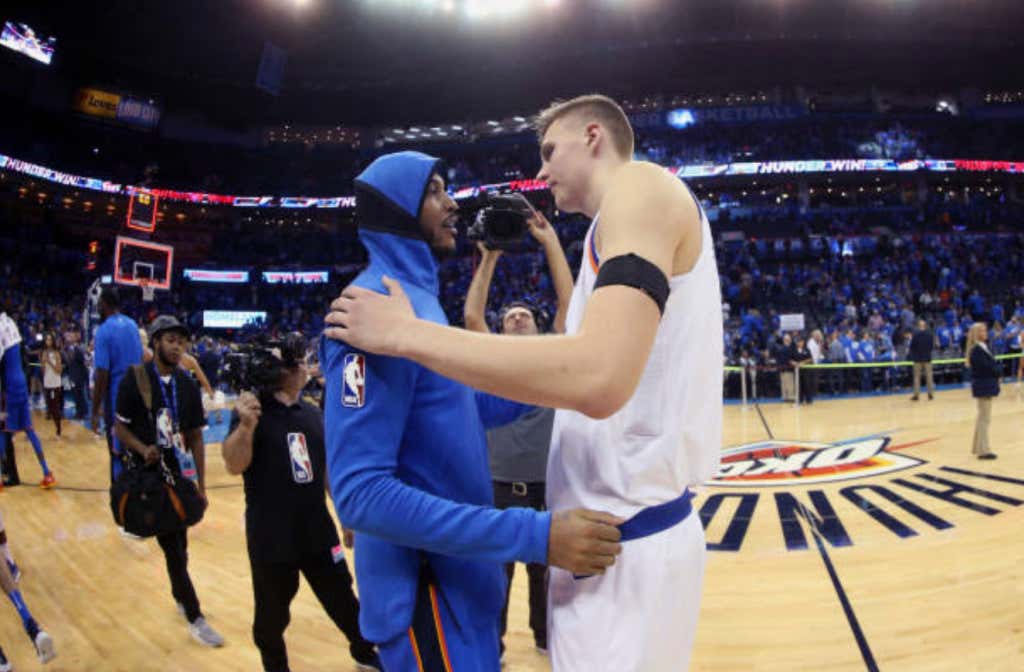 Welcome to Last Night In The NBA where we catch you up on everything that happened last night in the Association. Maybe you were watching Thursday Night Football, or the NLCS, and weren’t able to catch any of the three games last night. Don’t freak out, I’ll fill you in. Here’s what happened

The Raptors started off the season in very typical TOR fashion. Good defense, spolid shooting, and spread out contribution. Oh and it certainly helped playing the Bulls to open the season. For a player it sure seems like they want to move on from, Valanciunas had a pretty beastly 23/15 on 9-17 shooting

but he wasn’t alone. With 6 players in double figures, the Raptors had no problem overcoming what ended up being pretty pedestrian performances from Lowry (12 points) and DeRozen (11 points). A major part of the reason why was CJ Miles had himself an impressive Raptors debut

22/5 on 7-12 shooting with 6 made threes? That’s about as an ideal start as you could want as a Raptors fan. CJ Miles hasn’t really been on a team that has used him properly, and there will definitely be an opportunity on this team to have more performances like this.

OG Anunoby’s first career points were nice, even if it looked like this was happening in super slow motion

I’m also sure no Raptors fan is freaking out about Ibaka’s 8/4 on 3-8 shooting going up against the dominant front court that is the Chicago front line. Nope, no way.

For CHI, it was mostly gross, but there was Baby Dirk!!

Admit it, there were a few times watching that where you said to yourself “Damn, maybe he really is a Baby Dirk”. You can’t argue his shooting stroke is solid, and he moved pretty well.

Robin Lopez threw in an 18/8, and if we’re being honest, the Bulls actually played the Raptors close, they just had a brutal second quarter they lost 33-14. They actually won two out of the other three, and the one they didn’t win, went 25-23.

The NBA scheduling Gods sure are bastards. You had Kyrie opening up against CLE, and Melo opening up against the Knicks. Almost makes you feel as though things are scripted or something, but as expected, things did not go great for NY. Russell Westbrook picked up right where he left off snagging his first triple double of the year (21/10/16) on 7-12 shooting

This now makes 80 and counting for his career. He certainly had help too, with PG13 going for 28/6 in his Thunder debut, and Melo wasn’t too far behind with 22 of his own

It still looks really, really weird to see these two in Thunder uniforms though. It’ll take some time for me to get used to that, but here’s something I found interesting. Melo had a Drtg of 96.8 lat night! Signs of defensive life! Sure it was the Knicks, but you have to start somewhere.

Steven Adams also had 10/5 and he didn’t miss a shot, mostly because he did a lot of this

For NY, Porzingis showed why he is a goddamn basketball unicorn

Also, just a tip, make stop playing Baker at the point so much and allowing him to turn it over 5000 times. It also sucks that Beasley seems to have hurt his ankle in the first quarter, I guess we’ll have to wait and see if he really is better than Durant. Frankie Ntilikina only played 8 minutes, so Knicks fans probably aren’t too upset they passed on Dennis Smith Jr or anything, nor are they probably upset with Hardaway Jr and his 3-10 Knicks re-debut.

Now it wouldn’t surprise me if you were sleeping for this game, it was on real late, but man oh man was it was quality Lakers hate watching. They STINK. I repeat…STINK. Lonzo Ball? STINKS. Brandon Ingram? STINKS. Julius Randle? Kinda STINKS. Don’t let the final score fool you, this was a 30 point game in the 3rd quarter and the Clippers basically stopped trying.

For the Clippers, I want to pose the following question. Can a 100% healthy Blake Griffin finish in the top 5 for MVP? He’s done it before, and he looks fucking great

DeAndre Jordan went off for 14/24 in his 32 minutes, but the best part of this entire game was seeing Patrick Beverly terrorize the shit out of Lonzo Ball

Lonzo is going to see this A LOT, and he has no one else to blame but his Dad. That sucks, it isn’t fair, but that’s the reality. Another reality is that it’s going to be as fun as expected to watch Milos do his thing

For the Lakers, Lonzo went 1-6 and had just 4 assists, Ingram went 3-15, and as a team they had 19 TOs. They are going to have a reaalllllly rough year. Remember though, Lonzo Ball went undefeated in team scrimmages, so there’s that.

I’d love to show you actual highlights, but there wasn’t much to choose from, so here’s this pretty sweet Larry Nance Jr block

And that’s pretty much it. Now you’re all caught up, you’re welcome. There are 10 games on tonight, so if you’re one of those people that goes out on Friday nights and aren’t able to catch any of the games, make sure to check back here Saturday morning for everything you may have missed.