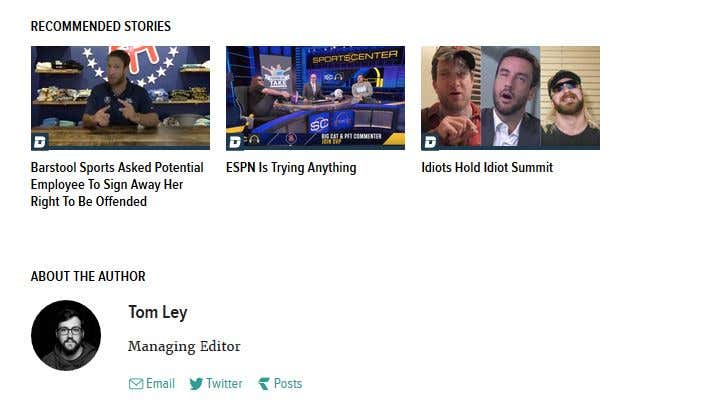 First things first. I apologize to all of Barstool for this being a story. I don’t apologize for what I said. (That sentence will be quoted, twisted and used against me). I apologize because I know how sensitive this topic is and that people like Deadspin/Univision would take what I said and try to make me look like the devil like they do with everything. I mean look at the related articles above. This is what they live for. But even I didn’t think they’d blatantly lie and open themselves up to another lawsuit. Regardless I should have known better. We live in a faux outrage society where non talented hacks need to use me for page views and this was a prime example.  They probably have more views on this article than they have all month or since the last 3 times they attacked me.

So let me set the stage. Today during Barstool Radio we were going through the news of the day and briefly discussed Al Michaels and his Harvey Weinstein joke. We all agreed he was an idiot for making it. We all agreed and discussed what a scumbag and monster Weinstein is. Kevin framed the conversation perfectly saying that what Weinstein did was unacceptable and he’s a monster. Nobody debated that point.

Then a thought popped into my head and I said in real time I shouldn’t say it cause I know people who hate me would spin it. But I stink at biting my tongue so I said it like an idiot. I asked Fran a hypothetical. Would she have had a problem if Weinstein or any high powered movie executive traded sex with an actress for a starring roll in a movie if both participants were equaling willing and eager to make this deal? No force. No groping. No bringing a girl back to his room and trying to get her loaded. If it was 1 million percent equally consensual.  I actually compared it to Woody Harrelson and Demi Moore in Indecent Proposal. We had a very Barstool Radio like conversation about it and debated the various ramifications and the overall topic of prostitution.  Again very barstool like and a conversation we’ve actually had a bunch over the years.  THIS IS NOT WHAT HARVEY WEINSTEIN WAS DOING AND NOBODY HAS CONDONED HIS ACTIONS. WE HAVE CALLED HIM A SCUMBAG 100% OF THE TIME. It was a hypothetical question I asked.

Deadspin said I asked this.

“The question was: Actually, should Harvey Weinstein be allowed to demand sex from actresses in exchange for roles in movies?”

It may be semantics but the word “demand” is pretty important. I never said that. Deadspin makes it’s seem like I condone men demanding sex from their employees. Demand implies no choice.  They are making it sound like I condone assault and sexual harassment. I obviously don’t and people who have been reading me for over a decade know that. Again my hypothetical was if their were two equally willing participants who each had something to gain is that a problem? Pretty huge difference. And frankly I think it’s a fair question, but I still should have known better. I criticized Al Michaels for being an idiot and then I went and did the same thing. I guess I thought since it was Sirius and it was our crowd I could talk like how I talk and banter without it being ripped out of context. It was stupid and I’d hate if one of my employees put me in the position I just put myself in.  No need to put the ball on a tee for Univision.  I wish I never brought it up because I know the political climate today and I know there are leeches like Deadspin out there whose entire business model is clickbait headlines to get attention.  And I know I’m specifically a target. But at the same time it sucks to live in a world where you literally have to bite your tongue every two seconds because people want to stir up controversy out of nothing. But that is the world we live in and I know it. Sometimes I wish I could just throw on the purple pinny and go to war like the old days.