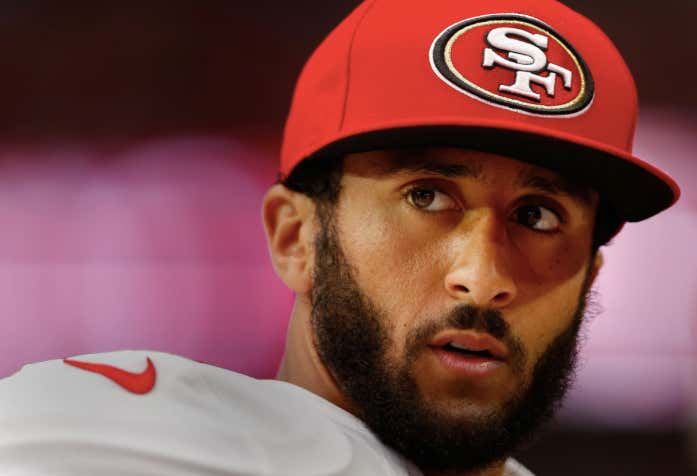 ESPN - Free-agent quarterback Colin Kaepernick has filed a grievance under the latest collective bargaining agreement against NFL owners for collusion, according to his attorney, Mark Geragos.

Kaepernick is not going through the NFL Players Association but has instead hired Geragos, who has represented several high-profile clients, including Michael Jackson, former NASCAR driver Jeremy Mayfield and musician Chris Brown.It’s not enough that he remains unsigned. There are specific elements of proof that he must establish in order to win his case.

This story is going to gain some significant traction in the next few weeks so I want to break it down before it gets too complicated. Oh and spoiler alert- he’s not going to win. Doesn’t matter if he’s right or wrong, suing thirty-two multi-billionaire football owners will result in a loss ten times out of ten. Too much money, too much power. If I’m wrong then I’ll eat my words, but I’m not. Moving on.

He’s essentially alleging that the owners of the NFL colluded to keep him out of the league as a result of him kneeling for the anthem. In other words, he thinks there was some sort of “secret or illegal cooperation or conspiracy, especially in order to cheat or deceive others.” Others meaning himself.

The filing, which demands an arbitration hearing on the matter, says the NFL and its owners “have colluded to deprive Mr. Kaepernick of employment rights in retaliation for Mr. Kaepernick’s leadership and advocacy for equality and social justice and his bringing awareness to peculiar institutions still undermining racial equality in the United States.”

It’s a wild claim. Especially coming from a guy who says he wants to return to the field. Typically if you want a job somewhere you don’t sue the prospective employer.

Even if it is true it’s going to be incredibly difficult to prove. The owners will just say he wasn’t playing well enough to be part of their team. Which is kind of true, he was benched in week nine of the 2015 season after getting off to a two and seven start and the following year ended the season two and fourteen. Not only that, they can say they didn’t want to deal with the media shit storm every time he takes a knee. Which everyone can agree was a massive distraction. Something football teams don’t like to have.

Kaepernick didn’t even let the NFLPA know he was planning on filing the grievance. They found out in the news.

The NFLPA responded with a statement later Sunday offering Kaepernick its support and reiterating its readiness to assist him, “as we do all players.” “We first learned through media reports today that Mr. Kaepernick filed a grievance claiming collusion through our arbitration system and is represented by his own counsel,” the union statement said.

Choosing to bypass the organization specifically designed to help you is a bizarre move. Even if he has a high powered lawyer (he does), letting the Players Association know seems like a no brainer.

Kaepernick said he has remained quiet about his desire to play to avoid causing a distraction. His agent has reportedly reached out to all 32 teams to note his availability. The NFL has not reached out to Kaepernick to discuss social issues. Trump’s comments last month drew a leaguewide response, as more players chose to kneel, link arms or otherwise react during the national anthem.

Personally, I don’t like when athletes don’t stand for the anthem but at the same time I’m smart enough to realize that the flag they’re kneeling for represents their ability to do so. I respect the fact that Kap is sticking up for what he believes in. It’ll probably end up costing whatever’s left of his career but at least he’s going for it. Good luck Colin, you’re going to need it!

Right when I though thought we were out of the woods.