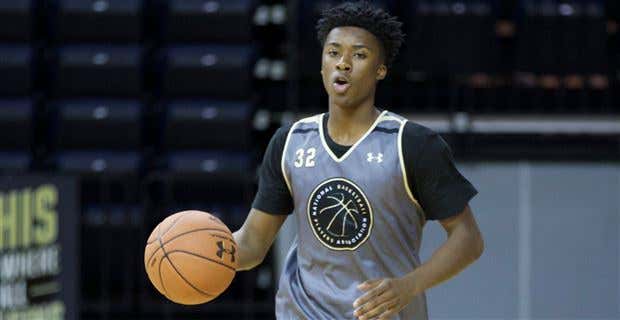 While this weekend had plenty of stories with the UNC case being closed on Friday, the Braxton Beverly ruling and Midnight Madness happening, there were some major recruiting news across the country. In an effort to keep everyone informed of what’s going on, I plan on doing some quick hitters over the weekend with this sort of stuff.

Man, Ed Cooley is doing an incredible job on the recruiting trail as of late. This year he has Makai Ashton-Langford coming in and now in 2018 he has David Duke and A.J. Reeves. Duke will draw comparisons to Kris Dunn with his 6’4″ frame and the fact he’s just a playmaker. He has the ability to beat you off the bounce by either getting to the rim or finding an open teammate. Plus, if you’re a point guard, you’re going to thrive under Ed Cooley. More importantly this is just setting Providence up for the future. They are a NCAA Tournament team this year for sure, but in two or three years it’s going to be a massive disappointment if they aren’t a top-4 seed and playing in the second weekend. If you’re a Providence fan, this signing along with everything else Cooley has done recruiting the last two years should have you real excited.

This was an important get for Kansas. The point guard depth coming up isn’t great and getting one of the five-star guys is huge for the blue bloods. Similar to Providence, the signing by Dotson will secure the future of the backcourt for Self and Kansas. If he loses Devonte’ Graham and Malik Newman this year he’ll still have Dotson and Cal-transfer Charlie Moore next year. Not to mention he also has Arizona State transfer Sam Cunliffe to play on the wing. We’ve seen Self start to use this 2-point guard set up more often lately with Mason/Graham and now Graham/Newman. He’ll have that for another year, the question is just what two start. Dotson is a 6’1″ guard from North Carolina who was AAU teammates with Zion Williamson – something you’ll hear as he nears his decision.

The fallout from the FBI investigation continues to happen as USC has its first decommitment following the news. J’Raan Brooks, a 4-star in the class of 2018 is the No. 70 player and announced via Twitter that he’ll be decommitting due to “unforeseen circumstances stemming from the recent news that has come to light in regards to the Trojan basketball program.” Brooks is from the Seattle area and should have plenty of offers coming back to him as he chose USC over the likes of Oklahoma, Virginia, Notre Dame, Cal and Stanford. I wouldn’t be surprised if Washington head coach Mike Hopkins goes after him in order to try and secure that Seattle pipeline.

The point guard class continues to come off the board as Eric Ayala announced he was going to Maryland not long after Dotson made his decision. Ayala is a 6’5″ combo guard from the Wilmington, Delaware area originally but has been playing his ball down at IMG Academy. People around the Maryland team have compared him to former Maryland great Greivis Vasquez due to his size and passing ability. Ayala likes to get to the rim, though he is a good outside shooter. But, he prefers to set up teammates, beating his guy off the bounce and drawing attention. You could see Maryland run a two point guard set next year with Ayala and Anthony Cowan.

Finally some good news coming from Georgetown. The No. 73 player in the class of 2018 and a top-20 power forward announced his decision to commit to Georgetown over Texas A&M, LSU and Arkansas. This is an important get for Patrick Ewing as it shows he can recruit nationally at a decent level. On top of that Leblanc talked about how important it is to go play for a guy like Ewing, which could sit in the ears of other top-100 recruits.