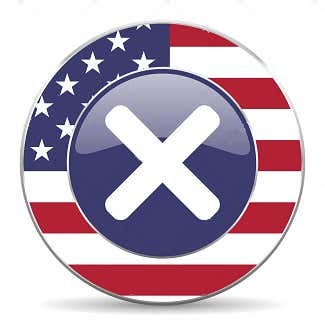 So here we are. Three days later. I’m as emotionally vacant as I was after the final whistle, though the pain has begun to subside. Albeit only a little.

People throw around the term “rock bottom” so much these days that it has no meaning anymore, but this right here and right now puts all those other “rock bottoms” that American soccer fans thought they had experienced to shame. 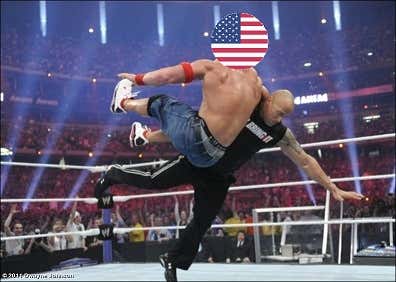 Anyway, despite what Fake News Portnoy said on Barstool Radio the other day, I did post a blog on Tuesday night outlining my immediate thoughts – FIND IT HERE  – and, despite being drunk on rage and alcohol at the time, I standby pretty much everything I said.

In fact, not to jump the gun, but as horrified and humiliated as I was about the loss to T&T, I am almost equally angry and ashamed about the fact that precisely zero people – NOT ONE SINGLE PERSON – has been fired or resigned following the biggest embarrassment in American soccer history. Imagine being as bad at your job as Bruce Arena and Sunil Gulati on a Tuesday, which means fucking something up so badly that the entire organization will spend the next FIVE YEARS digging itself out from underneath it, but then still being free to walk on in to the office on a Friday and be like, “Hey y’all, what’s good? Wanna get Chipotle for lunch today?”

But okay, back to the here and now. All the hottest takes – “deport the players” – have been made. So now that the dust has settled a bit let’s take a quick peek at how The Debacle will affect various facets of the US soccer landscape in the days and years to come (Q&A style for the sake of semi-brevity)…

Bruce Arena: GONE. Many people, myself included, though he’d be a “safe” pick to right the ship and guide us to WC18. We were dead wrong. I figured he would rely on some old guys while also mixing in some of the young talent we have coming up. I was dead wrong. He was totally married to playing aging veterans who he trusted. No better examples of how problematic this was than the performances against T&T from Omar Gonzalez, conceded a horrible own goal (and gave up a ridiculous penalty that was missed two minutes later), and Tim Howard, who will go down as one of the most accomplished American soccer players in history but has lost a ton of steps and was culpable on one and perhaps both of the goals we gave up. I would be shocked (and appalled) if Arena doesn’t resign in the next few days. [[UPDATE: HE GONE. Not saying I put the nail in the coffin by posting this 15 minutes before the announcement, but I definitely put the nail in the coffin. Regardless, this is not a surprise and is hardly even news-worthy. There are bigger – more deeply entrenched and politically connected – fish to fry. Speaking of which… (professional segue)]]

Sunil Gulati: GONE. He is a money guy, and has done a commendable job helping to transform the US Soccer Federation from a (relatively speaking) mom & pop shop into a big, well-oiled moneymaking machine. He does NOT have a soccer mind, which is what we need going forward, and regardless he was the one who hired Jurgen Klinsmann with a long-term contract then hired Arena when Ze German ultimately proved not to know how to coach. This is 100% on him and he needs to GTFO. If he has any dignity he will resign (or at least pledge not to run for re-election in February) along with Arena at a press conference scheduled for today. I have a sneaking suspicion though that he is going to do whatever he can to stick around. In that case somebody needs to whoop his ass in February. 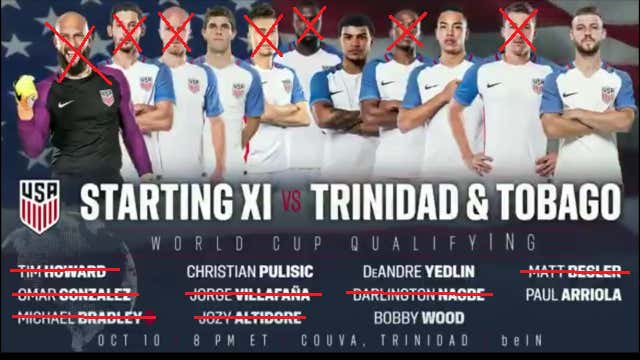 Seven of the 11 starters against T&T are either 30 years of age now (in which case they are 100% gone) or they will be when WC22 rolls around (in which case they should be 100% gone). The only ones from the XI who should be kept around are BVBabyjesus [obviously], DeAndre Yedlin, Paul Arriola and Bobby Wood. Others on the roster who are young and good enough to stick around are Kellyn Acosta and possssssssssssssibly Juan Agudelo. That’s it. There may be some people who think Jozy Altidore (age 27) could still hang around but he has given us no reason to think that will be the case, especially with younger and hungrier guys like Josh Sargent, Rubio Rubin and Jordan Morris (to name just a few).

CONCLUSION: there is about to be a serious housecleaning at the very top of USMNT, and it will mean saying goodbye to a lot of guys who have been incredible long-time soldiers (eg, Clint Dempsey and Tim Howard), some guys that should have gotten the boot a long time ago (eg, Gonzo and Wondo), and at least one enigma that some people will miss and others will love to see go (Michael Bradley).

IMPACT ON SOCCER IN US?

Long story short, not as much as you might think, and it could even help speed up the implementation of much-needed institutional changes.

The soccer “system” in the US is a clusterfuck. I’ll spare you the gory details because you either know and care about the problems or don’t know and don’t care, but here’s an extremely quick and dirty recap (broken into two basic age groups for the sake of simplicity):

YOUTH: the awfulness of “pay-to-play” will be thrown around by everybody and their motha in the coming weeks and months. Essentially, the cost of playing for a good youth team is prohibitive for tons of kids, and as a result a lot of talent (from poor and oftentimes brown families) is being left behind. Also, coaching standards are not as high as elsewhere so too often teams are coached by know-nothing parents. Also #2, there are nowhere near enough legitimate academies for kids to join. Also #3, the “solidarity payment” system where youth clubs get paid by bigger clubs for players is a shit show.

ADULT: USSF and MLS have different and often contradictory motivations. USSF wants players to be as talented as possible, which means playing against best competition possible, which is clearly not in MLS at the moment. MLS wants top American players to play in US because they draw interest and drive ticket sales. It’s a dilemma with no obvious solution. 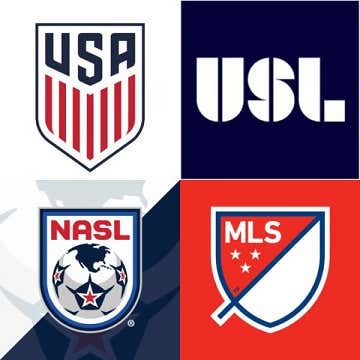 Unrelated but very related: a lot of people are going to try to pull an Elika Sadeghi and opportunistically inject themselves into this situation in order to push a “pet” agenda. This will be particularly true with the Pro/Rel hardos who will argue that “opening the system” will magically cure everything wrong with US soccer. It won’t. It would be a good thing for soccer in the US and for fans, etc, in the long-term, but rushing to hastily integrate the likes of USL and NASL with MLS is not the right response to The Debacle.

IMPACT ON US SOCCER FANS?

This SUCKS. Of all the “groups” affected by the USMNT missing WC18 it is us – you, me and every other red-blooded American – who will be the most seriously and detrimentally impacted. 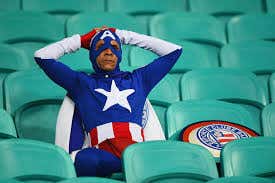 There are no important games to look forward to for a long time. There will be no red, white and blue-themed (and beer-soaked) watch parties to attend next summer. We won’t get to watch Christian Pulisic drop his balls on Ghana. All of this is a god damn tragedy. 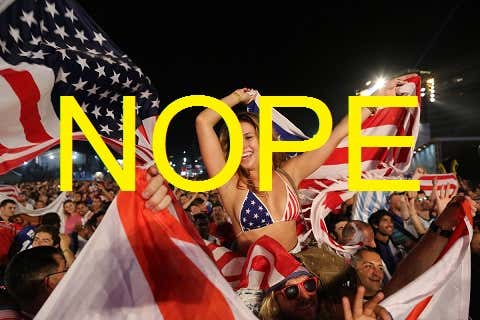 But here’s the thing that few people seem to understand: the World Cup is still going to be awesome. Slightly less awesome than usual? Well, yeah, but after some momentary pain and suffering we are going to get push on through and enjoy the hell out of it. Know why? Because we like watching world-class athletes perform at the top of their game in pressure packed situations, because we like day drinking, because we like gambling, and/or because we like all three.

Know why else you and I and TONS of casual American fans are still going to get wrapped up in the excitement of Puty’s WC18? Because – with all due respect to the Navajos and Cherokee and Chippewa in our midst, who really are in for a horrible summer –

EVERYBODY ELSE is from somewhere else. Maybe its Germany, maybe its England, or Italy or Brazil or Japan or Poland or Serbia or, hell, maybe it’s even Mexico. Even though those dos-a-cero bitcces couldn’t scrounge a point off of the Hondos, and I will continue to hate their guts for it, that is water under the bridge now, and if someone has a little Mexican blood in them and that’s the reason they decide to watch the World Cup then more power to them.

And as for the more-than-casual American soccer fans who are crying into their Cheerios right now (just like me), I promise that by the time the World Cup rolls around you will have glommed onto a particular team (or perhaps even a couple) as your Plan B’s, whether it be because you are a Tottenham fan and thus legally obligated to root for England (or perhaps Belgium), or Real Madrid fan and likely partial towards Spain (or Portugal), or a Manchester United fan so you’ll inevitably go with Germany or Brazil or France or whoever looks best in the immediate run up to the tournament. [No judgment – wink.]

The fact is that we are ALL going to eventually gravitate towards various teams and make them our own (kind of). It’s just what we do as humans – and especially as Americans. We make everything into a competitive “us versus them” thing. We do it with domestic sports. We do it with politics. We do it with fucking pizza rolls and bagel bites.

So is everybody in these great United States of America going to get as worked up about WC18 without America in it as their otherwise would? No, of course not. But tons of people – more than you think – are going to get caught up in the excitement (especially with how FOX is basically now going to be forced to over-promote the shit out of it), and as the tournament progresses the lingering pain stashed way down deep in the recesses of your heart will dissipate as each successive country gets eliminated and joins us on the sidelines. The world will be together again as one big unhappy sports-loving family.

Except for Germany**. Those bitcces will probably be experiencing the unbridled joy that comes with lifting the World Cup. (Again.)

BONUS PREDICTION: Yes, everything sucks right now. But it’s always darkest before the dawn. The squad for WC22 is already shaping up to be pretty damn solid. And don’t even get me started about what might happen at WC26 on home soil. Suffice to say good things, my friends, good things indeed.

Back with the weekend preview in a bit.